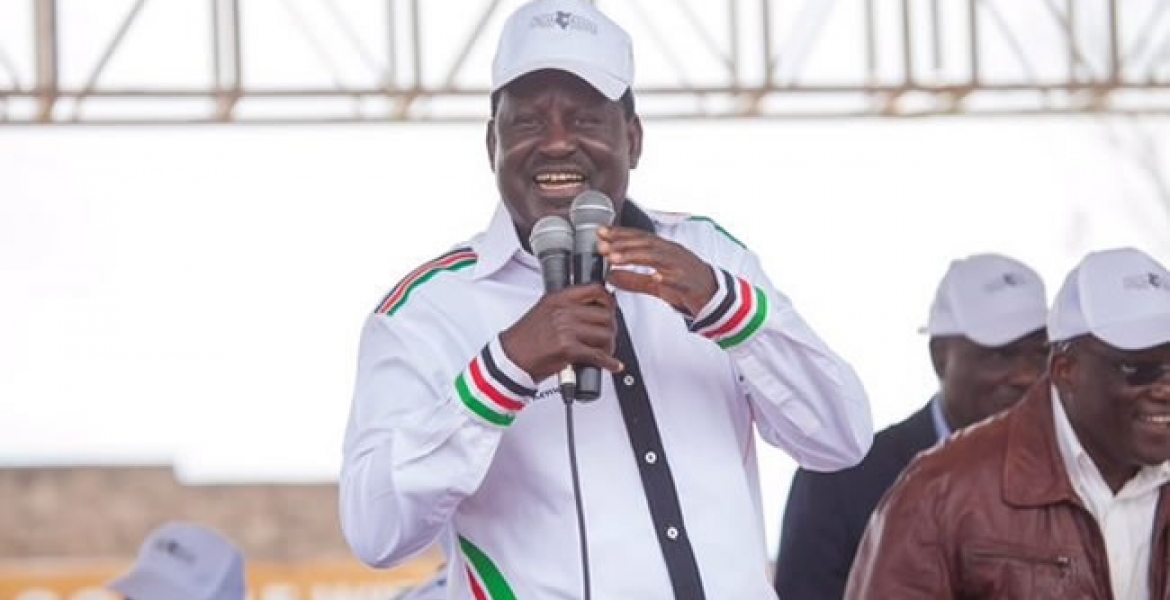 A section of Kenyans living in the diaspora have collaborated with the National Super Alliance (NASA) national campaign team to form a group that will lead in Raila Odinga’s campaigns in the diaspora.

A team comprising of 12 individuals will spearhead mobilizing of NASA supporters in Africa, Asia, Australia, Europe, Canada, Gulf and USA and will be chaired by George Fred Osewe, co-chaired by Victoria Bett.

Joseph Lister Nyarigo was named the Secretary in charge of strategy and media relations, while Robert Ndede and Samuel Okemwa will head the NASA campaigns and publicity in the blogsphere, print and television.

Dan Ochweri and Albert Musasia will lead the intelligence gathering and campaign operations.

"Many NASA supporters will be travelling home to be part of the team that will monitor vote tallying at the polling stations under the ‘adopt a polling station’ initiative to prevent rigging and other campaign matters," Mr Osewe said.

Nyaringo noted that a NASA diaspora office has already been set up in Nairobi.

"It comprises a pool of talented diaspora professionals currently coordinating locals and the diaspora in laying out strategies for Raila’s victory. The office is led by Bella Akinyi, deputized by Job Ocharo," Nyaringo said.

According to Osewe, the Diaspora team will focus on three main pillars during the campaign, which will be; resource mobilization for the adopt a polling station initiative, formulating campaign strategies, promoting Raila’s agenda in the blogosphere, print, television and at the grassroots.

Martin Ongadi, Eric Ashikoye and Evans Moseti will lead the NASA team in the Gulf.

The team has divided the US into five zones, with each zone not having more more than five coordinators who will work hand in hand with NASA supporters on the ground for resource mobilization.

Prof Frank Onchiri, Omondi Owera and Samuel Nyakemwa have been tasked to oversee the US pacific region covering Washington State . The North East will be coordinated by Sally Olembo, Geoffrey Nyamue, Steven Mwangi, Esli Aburi and Dr Dan Mugubi. "In the Southern region, covering Texas and the surrounding States, it shall be coordinated by Jack ambuka, Frank Ogwoka, Ezra Onsarigo and Frank Ogwoka," Osewe said.

"We can't afford another shambolic election manipulated by the government of President Uhuru Kenyatta. Every step of the election process must be open and free of the mysteries we have witnessed before," said Mike Owuor.

Minnesota Cordinator Mr Kerosi, observed: “Even though diaspora will not vote in August, our unity of purpose in supporting the adopt a polling station will ensure free, fair and credible election."

“Despite being away from home, I will use my resources to support NASA and ensure that the current government is defeated in August. Kenya needs a fresh start after many decades of misrule,” said Dr Dan Mugubi, who is also a coordinator in the US, East Coast.

"An online portal for diaspora: https://www.gofundme.com/3ix8sz4 and a Pay bill number 855425 have been established. There is also another pay bill 991444 established by the NASA campaign Secretariat where Kenyans from any region can channel their donations to support the same initiative. The two platforms will run parallel to one another," Nyaringo said.

“Kenyans who believe in change irrespective of their status in life should commit themselves to prevent rigging which is a cancer to our democracy. Pooling resources and physically having agents in every polling station will scale down rigging,” said Victoria Bett in Washington DC.

The coordinator of NASA team in the UK Ali Abdi expressed concerns of how rigging has kept robbing Africa off best leaders.

"The epic August election should set Kenya free and diaspora is ready to play a critical role. The diaspora understands that Kenya has suffered massively as a result of election rigging," Abdi said.

“The diaspora’s contribution to the country’s exchequer cannot be underrated. Our annual remittances to Kenya are in a tune of billions.” We want a leader of Raila’s caliber to spur the country’s economy through domestic and foreign investments,” said Nyaringo.

I know SOME of these so-called CO-ORDINATORS in the Diaspora and My Advice is:
Do NOT Waste Your Time and Money on Their GoFund Me.
WHY:
They are a Bunch of Crap Who STRICTLY wanted a LUHYA to be NASA Flag Bearer (and NOT Raila). And so they Cried "Foul" loud and clear. And I believe they have "Special and Selfish Interests in their Plans (and not in NASA's Plans for Kenya as a Whole).
So Listen My Fellow NASA Comrades:
Instead of Funding NASA through the Group ABOVE, save money, go to Kenya and Vote. And if you can NOT vote; the KERP your MONEY!!!

My Suggestion is:
If you (DIASPORANS) can't go to Kenya to Vote or Adopt a Voting Station by yourself and with your own eyes, then don't WASTE your Money (especially on the GoFundMe proposed ABOVE). Just KEEP your Money!!!

Raila
You talk of tribalism how many Kikuyus do you have in your campaign circle
How many kikuyus do you have in your campsign office in Nairobi or Kisumu..
I can not tell you it is tribalism but it your will we can alow and close eyes for some issues. Like in land issue issue this is high bidder and no way luos can give high bidder on land than kikuyu so Masai are mot stupid tgey cannot sell a kabd to luo when a kikuyu need it not tribalism but K sh talk piece

He also had Bishop Wanjiru herself; she left too. So how many Mt. Kenya MOLE betrayals do want Raila to Keep on Keeping?

The presidential race here in Kenya has two "Diasporans" and I've seen them interviewed on TV. Let me ask you this, do you remember as a child living in shags halafu unasikia kuna wageni wa Nairobi coming so you go and oogle them as one would a zoo animal, and then wait for them to leave so you can continue with your life? Outsiders. There they are, speaking English with a funny accent, and claiming to know what ails Kenya. Can't help but wonder why they didn't run for president huko wametoka? The feeling is that these are not real Kenyans anymore, their "Kenyanness" has been poluted and diluted.

KANGETA. Well said. And that's WHY I am Against this thing of GoFund Me. I see someone "Laughing All the Way to the Bank" like Wajackoyah.

Mstigari
If you need Raila wins wasa mstusi we are in democracy today in Kenya.
The youths in Kenya are fully Educated they do not abuse they wait Ndepe time
The result will make some cadidate to go to their girl friends than to their wife's
After election me and you hatutatukana tena tutarudi kwa machimo kura ugari bika matubo.

Diasporans have the counter KARAO a.k.a Kenyans Against Raila Amolo Ojinga team which is working tirelessly to see that my uncle is not elected president due to the 1982 coup,2007/2008 clashes and stealing the Kazi Kwa Vijana Funds and using the money for his own benefit - He bought the Crowne Plaza Hotel in Nairobi using one Caroli Omondi his former aide when he was a P.M a.k.a Prime Murderer. He also bought a home in Pennsylvania and Massachusetts in the USA.
What a political conman, thief and a liar Ojinga is.
He is my uncle but he will never get my vote.