Musalia Mudavadi Meets Kenyans in the US, Popularizes His 2022 Presidential Bid 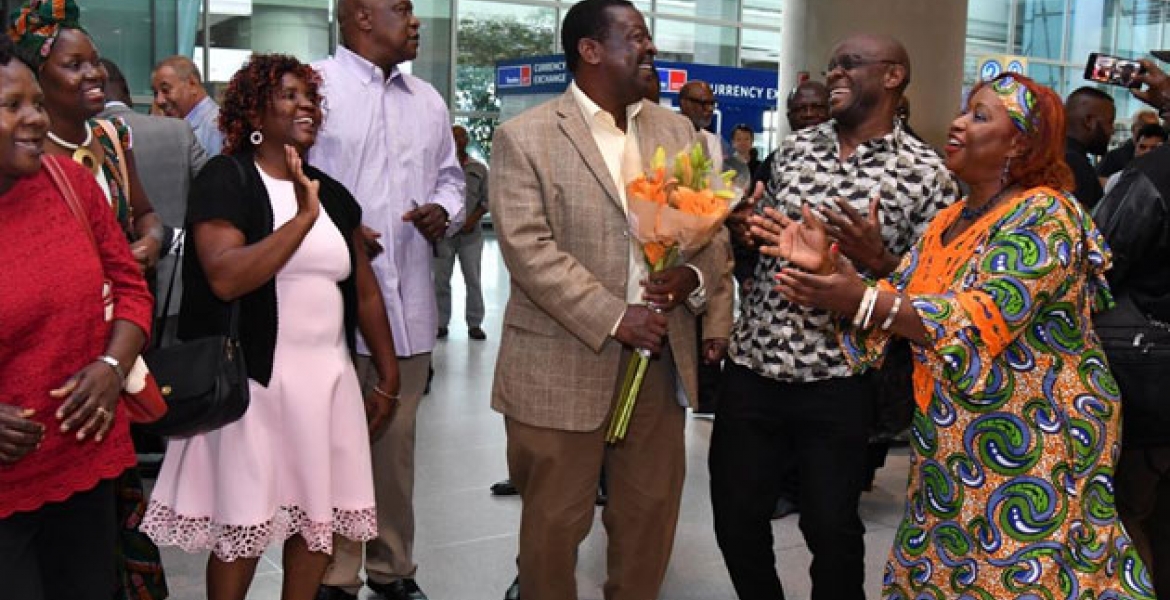 Amani National Congress (ANC) leader Musalia Mudavadi is currently on a tour to the United States.

Mudavadi is scheduled to hold public lectures and meet Kenyans in the diaspora to market his 2022 presidential candidature.

On Wednesday, Mudavadi held a meeting with Kenyans living in Newton, New Hampshire, where he called for more recognition of the diaspora community.

He said the government’s recognition of Kenyans abroad should match the great contribution they make to the country’s social-economic development.

“If Kenyans abroad lapse on their contributions back home there will be serious implications on Kenya’s development.

“We have to take the diaspora very seriously and current policies are not adequate enough to address their needs including investment back home and participation in national issues,” he stated.

Later on Wednesday, Mudavadi is expected to give a public lecture at the University of Massachusetts on the impact and implications of terrorism in Kenya and East Africa and how to address it.

The peak of his tour will be on Saturday where he will give a keynote address during the opening of the Kenya Diaspora Conference in New Jersey.

Why is he popularizing himself to a group of people who are not eligible to vote for him?? Last time I checked we in the diaspora are not allowed to vote.

He should lecture his people on how to Focus on the American Dream (and not other people's wives).

@kenyan he has been reading about the monthly record breaking remittance from diaspora..
.campaign is not cheap

Was thinking of the same @ Kenyan; come to diaspora and we DONT VOTE! Wasting his time and energy but 6th sense tells me he is soliciting for mchango from Luhya communities in the US.
Mudavadi M. doesnt have the votes or numbers which makes him irrelevant come 2022. Luhyas dont vote as a block making them the weakest link during election.

You got it. Then Omulembe money laundrers will use the "Adopt a Polling Station" to "pickpocket" unsuspecting donors.

Kenya’s politics has revolved around one man for so long.Every election cycle, after numerous obituaries on his political death, he manages to rise from the ash, like phoenix.One minute the is the bogeyman,the next he is a kingmaker.There is always one life to live,so there can only be one king at a time.However, when it comes to Raila Odinga, he has more than one life.He is the proverbial cat with nine lives, and each season he is the king, depending on who the players are.MUSALIA is atoddler who cant swim on his own period. DONT WASTE YOUR TIME WITH A MAN WHO CANT CRAWL

ell, as the famous African proverb (from a scertain community I wont name) goes ‘ the best husband is a dead wealthy one”.

Yes, DP Ruto controls just a palty 1.5million votes of the Kalenjin nation, the so called pastorists alliance is just in his motor mouth, we know the Masai and Turkana are in the pockets of Raila Odinga, the Pokots are in Gideon Moi’s camp and the Somalis will always be on the side of the government. William Ruto has no numbers.

The Luyha, Kisii and Coast are all Raila dominated. The Kikuyu and larger Mt Kenya region are stocks of trade for a few oligarchs who have so far declared the end of Ruto’s political career. One is left wondering why DP Ruto is stressing himself with ealier campaigns instead of vouching for lasting alliances. Instead of joining his boss President Uhuru in building the Jubilee legacy, DP Ruto is busy tormenting Uhuru and yet he expects the Kikuyu nationa to vote for him come 2022, witchcraft is real indeed !

It is obvious DP Ruto will fall come 2022, the statics are overwhelming, he must fall with or without the ‘stop Ruto movement.

One thing is for sure, DP Ruto will not be the first deputy president to have failed to ascend to presidency but the list is long; sample this list of highly educated, hard working , non corrupt leaders who despite their handwork and loyalty failed to make it to Statehouse.

4.H E Musalia Mudavadi had been a VP but Never became president.

8. The doyen Himself H E Jaramogi Oginga Odinga had been VP but never became The president.

Willian Samoei Arap Ruto will not be the first to loose presidency 2022.

The dude between M.M and the kitenge lady seem very excited and happy like meeting with his lost brother. Probably Mudavadis point man in diaspora;the guy with cashapp password ya kuchanga nayo pesa kwa diaspora.Lol

I met him in person yesterday and his agenda is very clear. He wants us ie the diaspora Kenyans to know that he is running for president and he welcomes our input into his campaign. He seems to have a very clear understanding on the role we in the diaspora play as far as the Kenyan economy is concerned.

Well said. But one thing I know about Omulembe peope is that: Omulembe people are the most Divided and Sub-tribalistic tribe in Kenya (only God can unite).

Waluhya, when it comes to voting. The most confused of all. MaDVD amawaste time tu! Luhyas don't even respect him. He seems like a guy who gets directives from his wife. Speaking of which... Have you seen his wife, walking around like a bouncer ready to punch someone! Hehehe watu wengine wamekaliwa chapati, Mudavadi amekaliwa kitako. The wife even sired with a muhindi and brought the kid to Mudavadis and her word was final. Other than that, I do not see any meaningful contribution Mudavadi can offer for him to run for President. He has been in it since Moi's time and as a matter if fact he is related to the former dictator Moi. So Luhyas do not waste your vote or your money on this spent guy. Watu waanze kutafuta vibarua meaningful Kenya, not everyone fits the bill of a leader. We are still with the crapload of Mps, Senators and Governors currently in office, we do not need any more!

There is something wrong with men who rose to power through their fathers achievements and Mudavadi is one, Odinga, Uhuru and Gideon etc. Thats why Kenyans are suffering. That is not to say the hustler is the ONE because the guy is the biggest thieve in Kenyan history. He thieved Kenya to bankruptcy 2013-2016 while the other one was busy drinking himself to oblivion.We need to start on a clean slate.

OOh!@ Christopher; That's deep! Seem to know him on a personal level. The guy is toothless as an old dog, no wonder KUKOB RAILA (another Kibogoyo) used him and dumped him kwa parking lot.

Who waste their time going to listen to thieves like madividi who his money has lots of questions.Remember he sold cemently land???Raila mollases company,kazi kwa vijana billions during coalition,82,07/08,2013/17 killings of innocent kenyans??So guys only Ekuru Aokot deserves that seat nobody else??Unless diasporas r so stupid to support this thugs then i rest my case.Personally wr campaigning for Ekuru Aokot