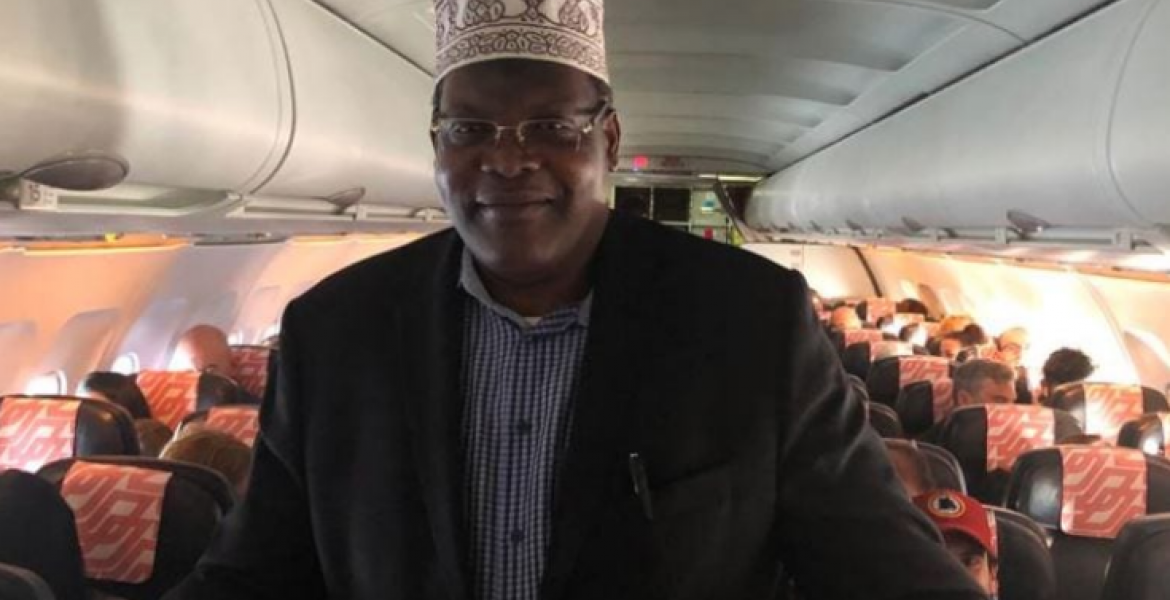 Miguna, who had earlier sent a photo taken inside a plane he said was bound for Nairobi, said he was denied boarding the flight following directions from the Kenyan government to the airline.

Caption of a denied boarding certificate posted on his Twitter feed shows Miguna was denied a boarding pass after checking in to flight AF 814 from Paris (CDG) to Nairobi.

Mister MIGUNA MIGUNA booked or checked-in for flight AF 814 from Paris (CDG) to Nairobi (NBO) on 07 January 2020, but did not board the aircraft.

We remain at your service via the ‘Contact us’ section of www.airfrance.com for any follow-up enquiry.

This certificate shall not be interpreted as an acceptance of any legal liability on the part of Air France.

Earlier in the day, Miguna said Lufthansa Airlines had prevented him from boarding a flight in Berlin, Germany on Monday night following a red alter issue by the Kenyan government. He later said he was allowed on the flight and said he would be arriving at JKIA on Wednesday at 9:45am.

It was not immediately clear if the trip from Paris to Nairobi was part of Miguna’s original itinerary, who had on Monday indicated he was in Germany and getting ready to board a Lufthansa flight to Nairobi.

At issue over Miguna’s travel nightmare is the question over his citizenship. The Kenyan immigration department says Miguna Miguna became a Canadian citizen prior to the promulgation of the new Kenyan Constitution in 2010 that allows for dual citizenship, but to date has not applied to regain his Kenyan citizenship as the Constitution demands.

In 2018, the Kenyan government confiscated a Kenyan passport in Miguna’s possession, saying he acquired it illegally. The government also deported him to Canada.

Miguna however insists he is a bonafide Kenyan citizen by birth and has vowed not to re-apply for Kenyan citizenship or enter Kenya with a Canadian passport and a Kenyan visitor visa.

The Kenyan government through the Deirectorate of Immigration Services had on Monday said it would comply with a court order facilitating Miguna’s entry into Kenya.

Air France removed me from Flight AF0814 from Charles De Gaulle Airport to JKIA, which was about to take off. Despot Uhuru Kenyatta and Conman Raila Odinga are so afraid, cowardly, tyrannical and weak that they have sent RED ALERTS to all airlines. We shall never surrender! pic.twitter.com/SRdOZqlvxR

You and who Mr. Miguna you were born alone and will leave earth by yourself this drama adds you no value simply lie low Comply in a fight you do not show your enermy all the weapons be4 a fight..be smart nxt time

This is very shameful, but despots have no soul, so shame is not in their vocabulary.

@banoo - I thought Kajuang, the king of mapambano has been fed for a while now! I thought a devil incarnate would think the term mapambano is still worth something!

Miguna is a flight risk. Baba would not allow MM to clash his birthday party.

Miguna Miguna though a very smart bookwise is not wise person. He has foolish tendencies that is often imprudent and lacks in good sense or judgment. The problem he is facing now is of his own making. The man was my schoolmate at Njiris High School and I know him too well. He is someone who is practical rather than sentimental. He is stubborn and hardheaded and he never compromise or listen to anyone. He is obsessively egotistical and self-centered

So why won't he follow the constitution and reapply like the rest of us? Or does he think he supersedes the Kenya constitution?Does this behavior not point more to arrogance than practicality?

@mumdumugo exactly> he is lucky he is not being fined for the fraud he committed . Miguna thinks he is bigger than life . The government will never pay the costs he is incurring with his stupidity . He thinks he has a right but when they want to frustrate you you can have all rights yet you don't exercise them . His insults to Uhuru and Raila don't help . we know what they are but we shut our mouths it does not bring us anything maybe jail term. he can wait until he come to Kenya after all he crowned Raila on that faithful day but Raila has cast him to the hyenas

@koni - I won’t confess I know the damn guy if I were you!

However, now we know that you know this geek, why does those of your age act so stupidly entitled?

Does mx2 think he is an article of any commercial value to Kenyans? Or is he just johnnie come lately trying to make it big in Kenya through unorthodox means by instigating other dummies to create a state of anarchy in Kenya?

Now with that said, where is America, the British government, EU and the all foreign ambassadors who shamelessly say their interests are protected by despots??

You’ve been conned which actually amuses me.

Or you busy fight terrorism and Al shabab the war you WON, Won and wonnnn????

Continue with your Wilful Ignorance and looking Estupidoo!!

The rest of us We Fight On.

No Retreat, No surrender!!!

The struggle continues because we are sure of victory.

Miguna just trying to stay relevant. This man has personal issues none of the millions of Kenyans can help him. There are so many ways to successfully deal with whatever he's trying to combat. But his brain can never comprehend, never will. What a waste.

He won’t be allowed in Kenya unless he stops using abusive names on the head of state and the right hon.Raila.

Go away Miguna Miguna. You are old news. You ought to behave better this time around. No one owe you a thing. You are not unique. Obey the laws of the country and stop you insults. Go away.