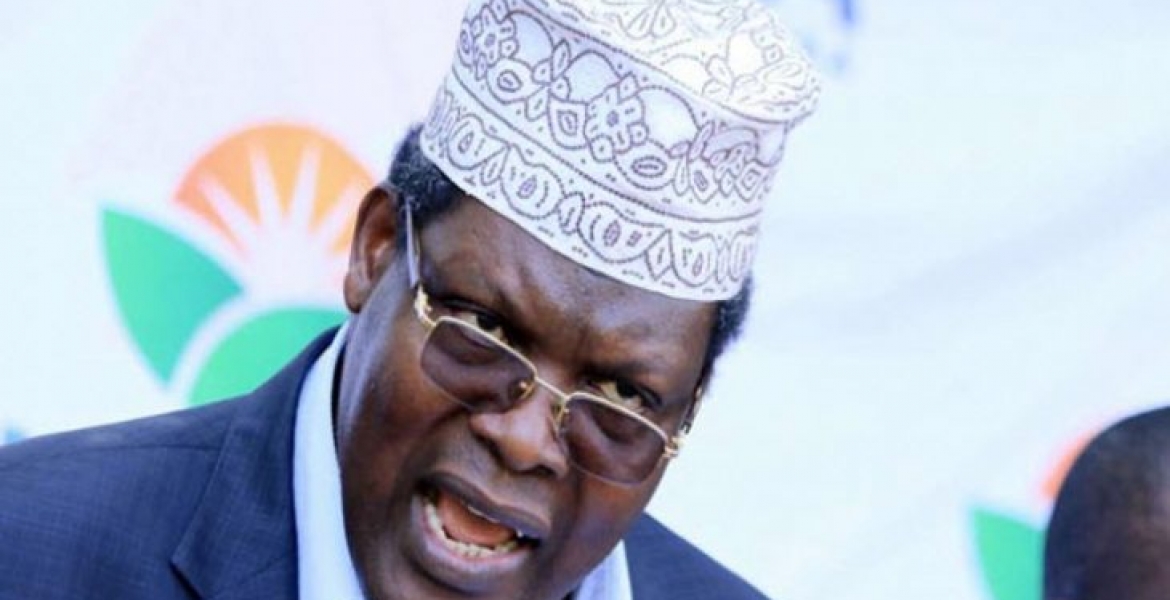 Miguna Miguna has called on Kenyans in the United Kingdom to stage a protest against President Kenyatta as he visits the country this week.

On Saturday, Miguna shared through Twitter the addresses where he alleged President Kenyatta would be staying during his visit to the UK and urged his supporters to stage a demonstration demanding he obeys court orders directing the government to facilitate his return to Kenya.

"Red Alert! Notice to all Patriots in London! Uhuru Kenyatta will be in London, UK, from January 20, 2020,” wrote Miguna.

He added: "He will be shuttling between the Town House located at 66 Lowndes Square, Kensington, and 10 Downing Street. Find him. Show him that No One is Above the Law!"

"Arrived in London, ahead of H.E. President Uhuru Kenyatta who, at the invitation of Prime Minister Boris Johnson, will join other leaders for the Africa-UK investment summit on 20th January 2020," Dr. Juma wrote on Twitter on Saturday.

Miguna, who was set to return to Kenya on January 7th, is currently holed up in Germany after airlines declined to fly him to Nairobi over a red alter allegedly issued by the government of Kenya. The alert allegedly warned airlines against flying Miguna to Kenya or any other African nation.

This was the second time Miguna was attempting to return to the country after he was deported to Canada in February 2018 over claims that he had renounced his Kenyan citizenship.

Folks like you are a hinderance to Africa’s progress. You make the colonialists have an after thought n dealing with Africans. Do you have to behave like a monkey to justify your stupidity and ignorance??

You can travel across the white man’s continent seeking unwarranted sympathies for you foolishness, but the whites in those countries just think you are another confused monkey of some sorts! They look at you and just wonder what happened to black folks like you. You are a huge let down to Africa and mainly those who claim to be trained lawyers!

With your current abnormal behavior, no wonder you have been barred to return to Kenya. You just stay where you are and don’t return back to Kenya. Wewe ni muchawi!

You can now join hands with those misguided diaspora folks in England who are as clueless as yourself, and have no idea what you are agitating for, to just run your stinking mouth for nothing!

Go away you damn fool! You are just a figment if your selfish imagination!

Kenyans a generally not doing well economically. Miguna simply wants a government that works for the people. It is people like you who keep supporting unscrupulous leaders who focus on lining their pockets at the expense of Kenyans. I wouldn't be surprised if you have a corrupt deal going for yourself and are afraid it will come to an end when people like Miguna are in office.

Who has time for this kind of nonsense? Miguna you are not above the law or below it. Fill the required forms to get Kenya pp. The GoK has the right to destroy your old pp because you got it illegally.

A kenyan does not need a passport to enter Kenya!.....why is this so hard to understand?

Miguna Miguna, I fail to understand why its so hard for you as a lawyer to understand the procedures outlined to regain your legal status. Why don't you feel out the necessary paper work and arrive in Kenya just like everybody else does?. The court orders issued to my opinion carries no weight as you have failed to produce the necessary documents to allow you back in the country.

Miguna is a Kenyan citizen who needs no "paperwork" to go to his own country. Your "requirements" are irrelevant

kenyans in UK and US should take this opportunity to show their displeasure with the antics of Uhuru and Raila not beacuse of Miguna but because they can. Let the authorities out there know that these two are criminals.

You are on record writing that Miguna is more special than the rest of us as he's not bound by the 2010 constitution. Why don't you lead from the front and organize a demonstration against Uhuru....while you are at it, show your open hatred for kikuyus, kalenjins and luhyas living in Houston.

@guest#13 - how are you gonna stage demos against Uhuru and Raila while you work as a hired 18 wheeler truck driver between Houston to New York?

You can stage demos by hooting to your fella truck drivers across the highway - hoping that the HOUSTON highway patrol does not catch you acting stupid!

You should first take the time to think how to own your Truck instead of wasting some valuable time preoccupying your feeble mind with stupidity!

Every body else in the diaspora is very busy working under the cover to earn a descent living!

You go stage demos by yourself. Maybe you will get back to driving trucks when your huge family go hungry. Wacha uchenzi na upuzi.

This is what Kenyan children have been reduced to by Uhuru.
All civic minded kenyans have declared thei government inept. If that is not reason enough to protest nothing is.
https://www.standardmedia.co.ke/pictures/725/poor-state-of-nyatege-prim…

@guest#13 - what are the local leaders (Chief, MCA, MP, Senator, Governor and the local community leaders) in the Nyatege area doing to fix the problem!

Charity begins right at the door steps of a home. The National treasury have allocated funds to develop each county. You can blame Raila and Uhuru all you want but the local leaders are the main problem.

You are a problem too because you are not asking your MP why he has not fixed the school where your cousins go back in Nyatege!

Now I understand why you are just a truck driver for someone else! You have yet to mature to own your own truck. It will take you a change of attitude to have the ownership mentality. You must confront your own problems head on without reflecting blame to the other guy next to you.

Guess what? Soil and water does not cost a thing in Nyatege. I also blame the parents who are not willing to take the initiative to rebuild the falling walls of the school their kids go to. Pure laziness does not help in the cases like this one; which you Ame to be so proud of while sitting pretty in HOUSTON, Texas!.

It takes an ingenious man to do great things - and the same thing applies to your local community and leadership back at home! I blame you for your problems in Nyatege school.

You can effect positive change in Nyatege regardless of where you live in this huge (equally small) world. Tell me what you plan to do about; and I might step in to help!

Here in Kenya where I am many school are like this. It is a national problem. That is why Uhuru needs to step up! National problems call for national solutions.

@guest#13 - I want you to start thinking of what role you can play to effect positive change in Kenya, beginning with the Nyatege school that you kindly put on the International media for the world to see.

Can you visit this school, hold a meeting with the Head Teacher, all the teachers, parents and well wishes to discuss a workable solution to the dilapidated falling school?

Can you also talk to the local Chief/MCA and the MP (ask the MP is he/she can spend 1/4 of the CDF money to repair the school) to figure out why no one have taken any action(s) to repair (rebuild the school)?

The CDF kitty is allowed Kshs 150,000,000.00 budget annually; for your information! Who is the local MP in this area and can you provide his cell phone number???

Finally, what do you want the well wishers (people of goodwill) across the world to do to fix the local problem at Nyatege school?

You can’t just talk, talk, and more talk without providing a way forward - a tangible solution to the current problem!

I'm not just talk. I have paid school fees for several children. They are not in Nyatege though.
I would confront the said people if they did not such so much security provided by the Uhuru government. ordinary people like me can't get near our misleaders.

If Miguna pays me, i will go and protest, but in the Diaspora we have to work to pay our bills. Miguna should ask his wife and children to go protest - he knows where Uhuru is gonna stay, even the address. Miguna send your family there, my brother. Sorry,i have to go back to work, my break is over, and i have bills to pay.

@wamami - I agree with everything else you have said except asking Migunax2 to pay you to go do the wrong thing!

Is life all about the crazy sayings that, “a dead kikuyu will rise up from the dead at the sound of the silvery shillings!?”

You shouldn’t asked to be paid to commit a crime - that is exactly what the crazy politicians do to eliminate those they have disagreed for stealing our resources.

You can Be ashamed for now but dust off the shame and do the right thing - mugikuyu na mbeca!

Dusting my shame off..........but this is ridiculous. Who is Miguna to order people in UK to go and protest? I rest my case "never argue with fools" Miguna being one.
Peace.

@wamami, my beef with you is simply based on your one statement, “if Miguna pays me, I will go and protest....!”, said Wa-mani! And so I asked you, “are you gonna sell your soul for money?”

May I now rest my case?

@Wa-mami...I empathize with your hamster on a wheel conundrum but it is protests like these that will allow you to get off that wheel. I hope you reconsider.

Miguna Miguna is the real troublemaker here. He thinks he is all that. The bus has left you already. You don't figure out that much in the ordinary mwananchi's daily life. Go away.

If all other Kenyans who had to renounce their citizenship before acquiring a new one had to reapply, why would you Mguna Miguna be treated as a special guy?? Help me understand. You can probably fool people who have never left the Kenya and learned about immigration laws and consequences of not following them, but not us the diaspora. You should know better jaduong!