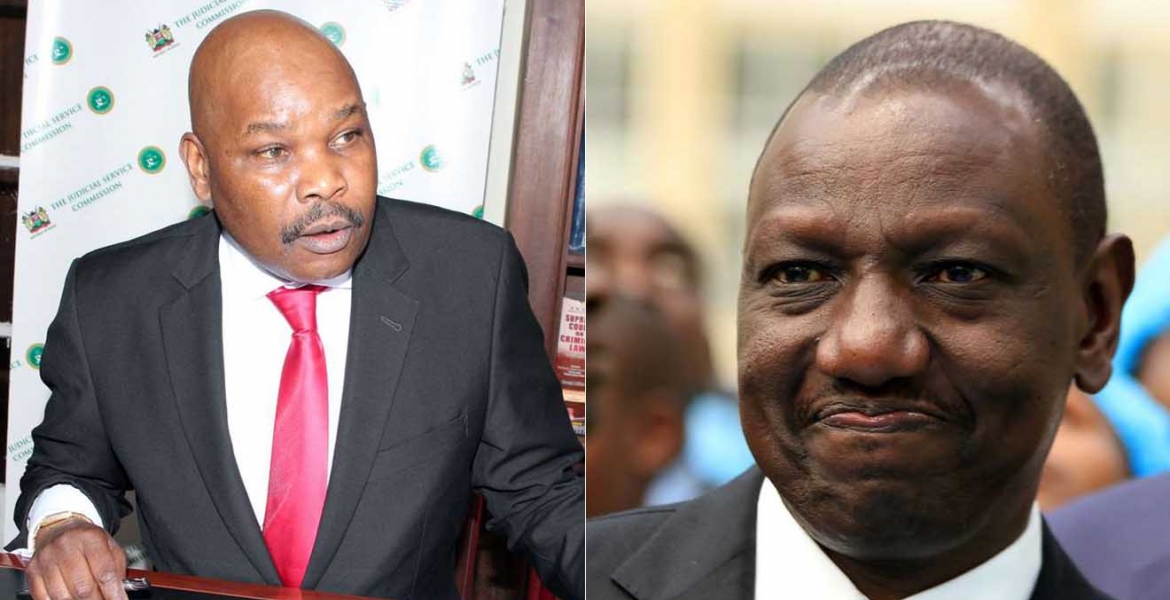 US-based Kenyan lawyer Prof. Makau Mutua has urged Deputy President William Ruto to resign, saying it is clear he had fallen out with President Uhuru.

Mutua, through Twitter, likened the fallout between Uhuru and Ruto to that of founding President Jomo Kenyatta and his vice-president Jaramogi Oginga Odinga, where the latter decided to resign.

Prof. Mutua cited the Saturday’s claims by Ruto that the ‘system’ was out to bring him down over his bid for the presidency in 2022.

"It’s clear William Ruto is at war with Uhuru Kenyatta. Otherwise, how can you accuse your boss of destroying you? It’s time to resign. That’s what Oginga Odinga did under Mzee Kenyatta," Mutua wrote on Twitter.

Speaking on Saturday during the burial of Sergeant Kipyegon Kenei, a police officer attached to his office, Ruto said the killing of the deceased was part of the plot to intimidate and frustrate him.

“It is evident that there are people who want to paint me evil and frustrate me politically. The plan has already been laid. The DCI should do his work of investigating as a police officer. He should not delve in politics,” said Ruto, adding that he was ready to die.

“If they are after my political bid, let them come after me. Not people like this young man (Kenei) whom they dragged into the fraudulent deal and later ended his life."

In a post on Twitter on Saturday, Ruto noted: The DCI has been mobilised, for political reasons, to discredit & destroy my office with all manner NONSENSE and to bring me down. Those in this scheme are boasting that I will not be there soon. Since the system cannot elect anybody, they can only kill. But there is GOD in heaven.”

Makai, you need to hush! Sheeeee! What advise can you give anyone. All you do is bark but no solutions.

Your name betrays you Mutua. You opinionated. You have never supported DP Ruto and you will never. Your law degree has been diluted to stupidity by your ukambaism.

Your name betrays you Mutua. You opinionated. You have never supported DP Ruto and you will never. Your law degree has been diluted to stupidity by your ukambaism.

The key individual on this matter is Rashid Echesa but dp never ever attempt to criticize him directly
If left my house well locked only to come back and find open the only logical thing to do is to change the lock. William Ruto office have security guards chief of staff his personal secretary and other people who man front desk. Up to now none has been changed or transferred yet he has adocity of attacking DCI. Let him do the honor and resign

The last thing Ruto will do is to resign because the DP position is the only thing of value he is tightly holding on!

Ruto is a man under siege from his own personal greed and recklessness! Maybe due to his arrogance and stupidity.

Hehehehe huyu jamaa aendelee kuslave himself kwa mzungu newyork n leave we the kenyans alone.We will elect d.p 2022 by 12pm n send mganga rao straight to fish omena at 78years old.So makau b prepared to move to bondo with yr god rao.Why r pple infected by dp like hiv/aids talking shit about him kila wakati.He may have issues here n there but i if raila is the choice it's beta we elect a straying dog instead yake.

Mutua M; a disgrace to ukambani just like his friend Miguna^2. I would be worried if my kid was persuing law in North America. My 2 cents tell me these dudes are not real lawyers??BTW, What kind of lawyer is Mutua or Miguna;criminal, business or "kenyan lawyer"?? Wale wanadanganyanga wakenya ati they can help with makartasi!!

@kibwegon - let’s face the facts - you can never afford to educate any of your children (if you have any with a bit of common sense) in the USA. That is simply a fact you will have to live with! Don’t be jealous - the two guys are lawyers in their own right regardless of your confused state of mind.

@ Rono: Lol bro! I like your twisted facts or alternative fact whichever it is. Fyi, yes I can and afford to send you too to any school of your choice to expand your limited knowledge. As alumni of Univ. Of Maryland, College Park, (Clark School Of Engineering) I can assure you that my son can attend any school of his choosing in 3yrs time and I can afford it fair and square!
In reference to the article; acquiring knowledge using it wrongly is in itself moronic! Tell it to your boss Mutua M.(don't think he is a real lawyer) Btw; no idea which law school he attended? Kibwezi law school? me thinks!

And for folks like you who should know better but have developed a habit of undercutting your fellow Kenyans there in American, we all tend to wonder why you are so jealous about others who worked hard to achieve their successes. You seem to suffer from some inferiority complex and some sort of insecurity most Kelijins regular suffer from. No one you all ending up killing others at the highest office in the land. And by the way, being an engineer is not all that ass popping thing! We got millions of them hard hitting the ground all over the world without any substantial work to do. Respect others and they will accord you the same level of respect. Leave Mutua and Miguna Miguna alone, and spend your time wisely advising your son not to turn out such an idiot like yourself!

I keep calling you to desist calling yourself Rono and kindly use your Omondi or Akinyi. The name you cannot spell right is Kalenjin not Kelejins!

@kibiwen, if you are bragging for attending Clark School where you studied Civil Engineering, how much should those of us who attended MIT, Harvard, Princeton, Oxford, and John Hopkins University to study Biophysics, Nuclear Engineering, Computer Engineering, etc brag? Humble yourself pal!!

But really, attending MIT shouldn't be an end in itself. There are just too many problems that need to be solved. Besides, no one owes you anything just because you went to Hopkins or wherever.

Eeeer...I do not know what you all are arguing about, but to be clear:

- Makau Mutua attended Harvard School of Law. And was also a Dean of a Law school (in Upstate New York). A Maryland Degree is n match for him. He is well read and I can say moneyed.
- Ruto attended UoN and has a doctorate. The requirements used to satisfy acquisition of his doctorate are in question, but he did get one. He is moneyed too, though via questionable means.