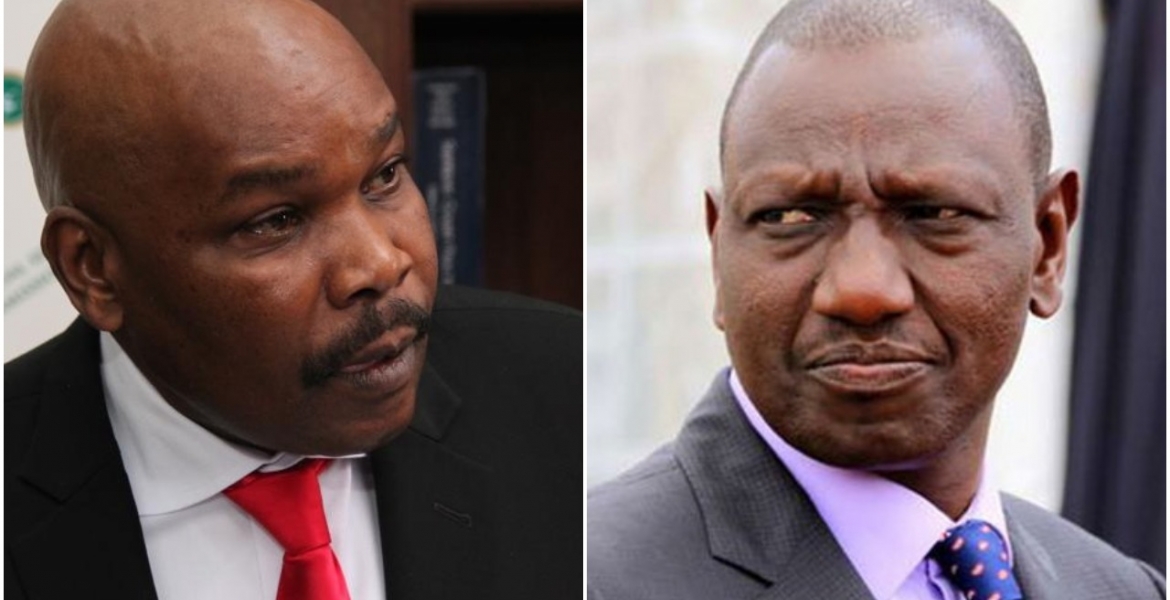 US-based Kenyan scholar Prof. Makau Mutua has hit out at Deputy President William Ruto, accusing him of being a coward.

Prof. Mutua on Wednesday said he is shocked that DP Ruto has remained silent as his foot soldiers continue to be axed one after another.  This comes after Senators Kipchumba Murkomen and Susan Kihika, both close allies of Ruto, were unceremoniously stripped of their leadership positions in the Senate.

The two were dismissed as Senate Majority Leader and Majority Whip during a meeting chaired by President Kenyatta at State House last Monday.

“I am flabbergasted William Ruto’s foot soldiers like Kipchumba Murkomen and Susan Kihika are being picked off one by one while he [Ruto] cowers under the bed in Karen,” Makau wrote on Twitter.

He added: “The man from Sugoi should stand up and defend his men and women.  No general abandons his fighters.”

Two days after the changes were made, DP Ruto is yet to comment publicly on the matter although leaders who support him have protested the decision.

Murkomen and Kihika challenged their removal at the High Court on grounds that due process was not followed and want the changes reversed.

The man is snake.

Mutua, silence is golden. Not everyone payukas like you and Miguna Miguna. You do not know the count of rabbits Ruto has in his bag. The cowards are those axing then likes of Kihikas.

Ruto is all about himself, Ruto and I; period!! He will not stand up for others because he is trying to protect himself first! He is a bonafide coward ready to die fighting for only himself!!

Ruto’s foot soldiers are completely neutered by Uhuru and there is no any other way you can put it; they are finished!! The likes of Kuria, Nyoro,Gitau, Alice, Kiujuri, Ichung’wa, etc are just rented out for a huge pay to talk meaningless smacks! They don’t mean what they say but they will do it for the money.

You can never buy a kikuyu vote with money!! They are just using Ruto, and especially his stolen money, to eat! They will vote with Uhuru once Ruto’s money is finito!

As for Ruto, the man is in a tightly sealed cage and he cannot get out without being impeached! That is the reason the man of Sugoi has kept quiet while his foot soldiers are being scattered like dry wheat!

This is another loud mouth whose relevancy to Kenyan political scene is questionable Who are you to question Ruto .Kambas in their small numbers will never rule Kenya.The man is probably terrified knowing the end is near and he may never ascend to the presidency as he had assumed it was automatic.Well he is learning there are no friends in politics just buddies for a reason and a season.All those harambees each weekend waste of taxpayer stolen funds,Kenya iko na wenyewe

No, Makau’s relevancy in Kenyan politics is non existent.

Makau Mutua you just want to a fight in an open field between DP and UK.

Mr.Makau Mutua, where the rivers flows silently, it run deep. Not all situations demands press statements. A ripe fruit perched so up in the tree will constantly get sticks thrown at,so it can fall and get eaten. Whatever is being throw at Dr. WSR will surely come to haunt them. Watch this space. It's just a matter of time.There is a saying in our Agikuyu pray- book that goes like this," Muikari thii gitinaini kia muti, niwe umenyaga thambo kiria iriyaga" to translate for you what that says,"The one who sits closely to the tree edge,understand what the black ants eats"

“A deep river flowing silently and a ripe fruit way up in the sky??”

Since when did the river get that deep after Ruto’s public outbursts in Kenei’s Murder/burial, childish allegations of others planning to kill Ruto, insults directed at a Raila, openly stealing from the national coffers through fake projects, etc!

So is this your assertion that Ruto is a “ripe fruit” in your small mind? God have mercy on this confused idiot!

Sir Kip, feel free to table evidence of stolen wealth by WSR to the antigraft squad. Their office is located along Kiambu road after you exit Thika SuperHwy. Am still waiting to see a plain view evidence of his corrupt deeds.

The reason why the crooked Dynasties are going after Ruto is because he is not one of their own. His lineage is not from the Rich and the famous. He made it on his own to the Big Boy political class.Now these hyenas are rolling their eyes asking themselves," how did this guy made it here?"

They only care for their own class typical of hyenas. Are you Dynasty sympathizer or kifaranga wa rushwa?

Using figurative names ( dynasties and hustlers) that were coined by Mutahi Ngunyi will not help you! Your friends who call themselves hustlers are merely known thieves!

We can call them here by name beginning with Ruto. Ruto is a confirmed thief. And we can also say Ruto’s signature is in every corruption deal (Dams, fake Arms deal which cost Kenei his life, treasury money embezzled through Rotich, a confidant of Ruto; money belonging to counties stolen by Ruto through guys like Sonko and Waititu, and the list goes on and on.

He shouldn’t steal poor peoples monies to enrich himself. And your boy’s days as the DP are running out real fast! And there is nothing you or Ruto can do to altar the course of actions taken.

You can stay in denial as that is choice to love the thieves; and you could be a thief yourself! You can act like an imbecile but the facts still remain that Ruto has frozen Kenya’s coffers but keep in mind all that money will be returned to its rightful owners in the near future.

I hope UK now understand the primary intention of this handshake.

The hand shake was designed to accomplish that specific purpose of reducing Ruto into ashes! His arrogance brought him where he is right now. The goal is to politically finish Ruto; and it will happen soon! And there will never be a Ruto presidency!

Ohuru brought in Raila to get rid of Ruto. Now that Ohuru’s plan is unfolding - with the Moi’s, Raila smells fish and likely has stronger plan B in the background. If Raila will not get what he wants from Ohuru, he is likely to exit and gang with a stronger group, the Rutos to get to power. With the BBI in place (likely) this strategy will work perfect where power will be shared between Ruto and Raila. With the Covid-19 pandemic, the political game in Kenya is complicated. Better to focus on the pandemic for now; feed the population and settle the political differences later.

@hakuna haki and comrades
Your ruto you are banging cymballs on is just producing irritable sounds in our ears.Ruto is just a scumbag holier than thee theft lord hiding in our dear churches in the name of giving some of the loot to protect his interest.Thats why his ill gotten deep pockets are making you n the likes be his bootlickers because you are driven by the emptiness in your stomachs and not ideologies to help move the society better on.Mr lootall goose has been cooked and eaten keep dreaming and watching an empty pot boil.