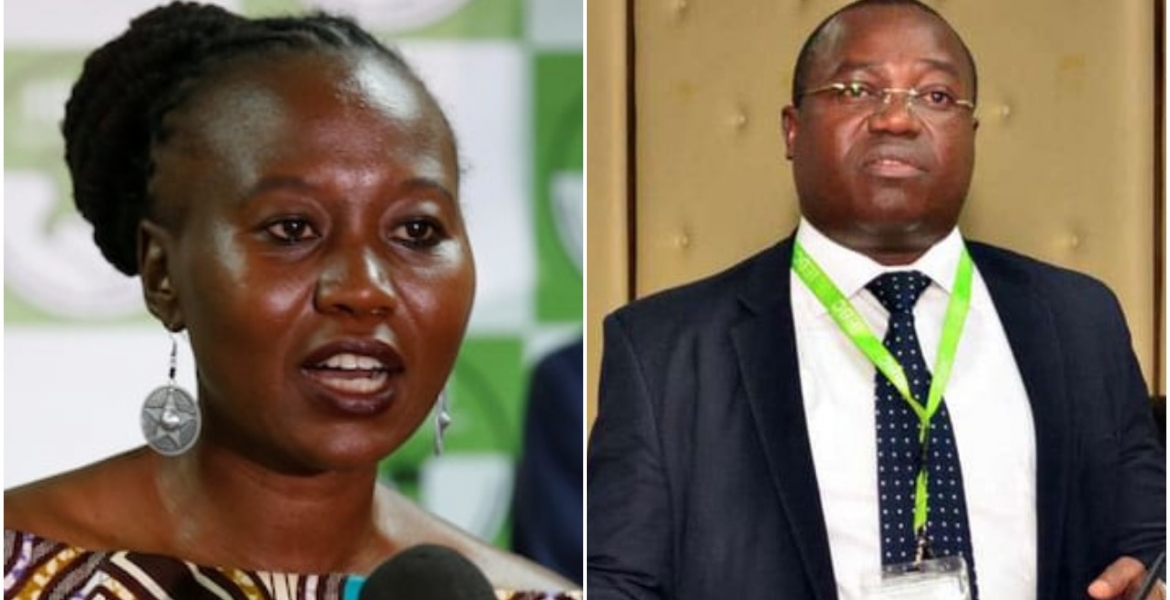 Roselyn Akombe says she is ready to fly back to the country to testify in the murder case of former IEBC ICT manager Chris Msando.

Msando was found dead in Muguga Forest in Kikuyu, Kiambu County on July 31st, 2017, a day after he was allegedly abducted in Nairobi by unknown people.

His mutilated body was found together with that of 21-year-old Carol Ngumbu, with postmortem examination revealing he was strangled to death. His abduction and murder came a week before the August 8th, 2017 general election in which he would have played a key role.

Taking to Twitter on Thursday, Akombe asked Law Society of Kenya (LSK) President Nelson Havi to take up the case due to public interest, adding that she is available to be a witness.

“On this anniversary of my colleague Msando’s murder, could you take this case up in the public’s interest? As I have said in the past, I am ready to testify,” Akombe tweeted.

Akombe fled to the US ahead of the 2017 repeat presidential election citing fears for her life and resigned from IEBC, where she served as a commissioner.

She later resumed her previous job at the United Nations’ Political Affairs Department.

It better be in camera from wherever you are. Otherwise say goodbye to all your friends and family before returning to Kenya. You are going to be just another statistic. Just my two cents worth.

Why would any one want to kill a coward like Akombe!?

She is just finding a way to return to Kenya. Nothing she says can be believed! A red alert needs to be issued for her to never enter Kenya, just like Miguna!

She probably thinks that she is a hero in Kenya, and does not even know that she is not welcome there. Like with Miguna, it is called Vanity.

Big headedness if an ignorant person like Akombe will lead her to a big hole!

This woman is a joke, She Bungled the 2017 Elections and clearly partook on the mire that surrounded the pre-election events. She is an attention seeker, She has been out of the limelight for a while and is looking to recreate herself..
UN should not allow Criminals to work for them, Its a Shame that You call yourself a Kenyan. Msando, If you know this much, why didn't you speak to Authority. Swear an affidavit and notarize it for all to see.

@Akombe - where were you when Chris needed you most? You have betrayed him, his family and the Kenyan people!

Everything you say lacks total credibility! You are already telling lies even without testifying to anything. You are a damn traitor!

You are not welcome back to a country you betrayed and deserted at the hour of need! You probably had something to do with the gruesome murder of Chris. You are not needed here; you are a rotten coward!

We do not need you! No one want to hear from you. You betrayed every Kenyan and now you want to open your stinky pussy mouth to tell us pure lies! Kenyans have moved on you ugly whore! You have zero credibility!

What happened to Akombe? She looks like a very old stressed up trash! This woman is lying about having something information in the death of Musando. I won’t believe anything out her mouth. She will tell lies because Chris will not be there to refute her nonsense.

Akombe is looking for protected trip to Kenya at the expense of tax payers! She should be talking about paying the money she owes the government before she can start pending fool lies! You will not get a visa to enter Kenya! Disappear in the thin air just like you did the day you left! Go to hell you idiot!

She is an America who should be denied entry into Kenya! We have moved on and you can keep your idiotic lies! You are useless!

Don’t think you will fool us for the second time! Keep you madness where you are, you selfish bitch!

Akombe’s betray was far worse than those who betrayed the Kenya freedom fighters! You left 58 million Kenyans in a dice situation to survive a lot in America! What you did at @Akombe still remains treasonable to this day! Don’t come to Kenya!

@Akombe - the only eye witness we want to hear from is your boyfriend MP Moses Kuria who followed Musando to his death bed!

You can add on what Kuria has to say if you and Kuria were secretly driving in the same car on that material day as it is rumored you screwed with him on many occasions prior to Chris’s murder!

Other than that, please keep your stupid mouth shut! You are just a drama queen wishing to awaken the sleeping dogs🐕! Leave Kenyans alone! Nothing you got we want to hear it!!

@👠akimbo - you are worth less than the red shoe in you ugly name! You got nothing anyone can believe! You betrayed young women and children by running away! No girl child can ever look up to you! You are worth a pile of Gikomba trash out the main gate! Go to hell!!

My daughter was 7 year when you took off in the heat of elections. She had been watching you on TV and she was very proud of you as a senior EIBC worker.

She used to talk highly of you then as you had set an example of how high women can go in the world of employment.
She was very heart broken when you left in a huff, and she started talking about how your departure shows that women cannot be trusted with the positions of power! As recently as last week, my daughter asked me about what happened to “that Akombe lady” who left Kenyans dying and went to hide in America!

She is now over 10 years old but she has not forgotten your actions over three year ago. I had a talk with her after reading that you @Akombe want to testify!

I sat down with her to discuss your intent! Wow, my daughter did not have kind works for you at all! She thinks you betrayed the women’s course in Kenya and you are not a good roll model for young women. She does not think that you have anything to testify about! She does not want to see you here!!

Those are her painfully spoken words!!

Kenyan men who are losers and hate successful women and underachieving women like Mary and Beth hating on a fellow woman. Pathetic. Read up on this brilliant lady and her achievements. These are the kind of people who should be leading Kenya, not the drunkards and failed students that know how to steal and nothing else. Shame.

What is brilliant about a damn coward who betrayed millions of Kenyans at the most critical time! She just want to stay relevant airing shit gossip!

@komen - are you freaking serious that Akombele need to be our president? or you just happened to forget taking your Psychosis medicine? This idiot is the last one for me to be jealous about her coward acts! Give us a freaking break!

@konen, Akombe should be hanged for what she did! You can marry her if you think she is such a success! Don’t be stupid @konman!

“Successful” is fairy relative! Academic credential is not the right medium to measure individual success! Akombe failed in every aspect of the word “success”! @komen - calling other men losers because they are telling Akombe the truth makes you sound imbecilic and a dummy!

I think that Roselyn Akombe is going through a Mid-life Crisis. She thought that she would be a hero, by betraying her native land. But no one is singing her praises, even in her adopted land. She does not know anything about Msando's death, because if she she does, then she would already have revealed it by now, consciously or sub-consciously. She is just playing games, to remain relevant.

Is this the same Akombe lady who eloped in the middle of the night with a witch doctor back in 2917 and went to Ethiopia to talk to the spirits of Haille Magistu? She is just tuning her horns for nothing! She got nothing worth listening to except some gossip nonsense!

@akombe. - wow, your gods must be very crazy if you think Kenyans care about your lollipop sucking lies! You got nothing to tell us of any material value! You didn’t even know Chris you liar!

Your drunkard looking face have said whatever you wanted to say. Get lost very quickly! It is a shame that UN hired a loser/you back!

This is like a mental case. There is no inquiry. If you've evidence, call the investigators and provide the info, or even better, call the newspapers and make it public. When someone is dead, you've the evidence and has been holding for 3 years, you're not very different from the killers.

Akombe, the problem is, no one can believe you. You betrayed the trust Kenyans had in you. Swallow your evidence and keep your peace. RAO must be using you to implicate his political enemies who may oppose him in the upcoming presidential elections.

Go to hell and stay there. No one in Kenya like you. You are despised here . You are a traitor.

No wonder no man can stand this Akombe fool! Go get laid! Why do you even bother to open your rotten mouth??

This woman is totally misguided! She is lost like a puppy! No we don’t want you to testify! We don’t trust you! You are full of yourself and cares less about the people’s plight!

@akombe - you are an insult to Chris! Stop playing those you hurt.

What was in the depth of your mental faculties that made you desert Kenyans at the 11th hour @akombe?? Please know Kenyans have also abandoned you pronto!!