Kenyans in Worcester, Massachusetts to Raise Funds for Kenyan Woman Hospitalized for Two Months with Covid-19 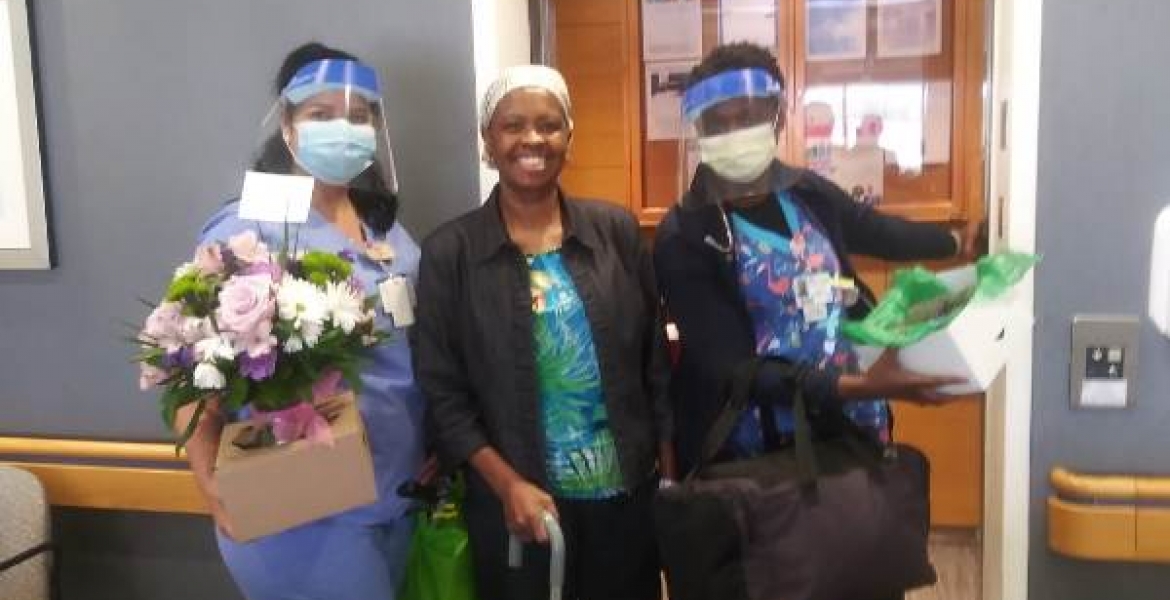 The Kenyan community in Worcester, Massachusetts has organized a fundraiser in support of a Kenyan woman who was hospitalized for two months after contracting Covid-19.

Catherine Mwaura, a mother of two, was rushed St. Vincent's Hospital in Worcester in an ambulance on May 17th and was admitted to the intensive care unit (ICU).

She spent more than two weeks in ICU fighting for her life before she was transferred to the Whittier Rehabilitation Hospital in Northborough in mid-June.

"I don't know how I contracted the virus but I suspect it was either at a homecare agencies visit or nursing home that I work for. I was taking care of so many people with the virus there and a good number painfully passed away under my helpless watch with my colleagues," she said in an interview.

"I did not have any symptoms all this time I was working in the two locations. We were taking all the precautions necessary including a full protective suit when working with the Covid-19 patients. I just felt extremely sick one morning and called an emergency."

Mwaura was discharged from the hospital on July 16th and is now recuperating at home but the ordeal left her struggling financially.

Friends and well-wishers have organized a fundraiser on Sunday, August 2nd towards her welfare.

"We were just shocked at how this disease affected Dr. Mwaura. She was so close to the verge of death but God is great she has just managed to fight and recover. Now as a community, we thought it is good that we come together and raise some funds for her welfare as she is windowed with no one else to help pay her bills for close to the two months she was hospitalized," said Rev. Ben Njuru, one of the organizers.

The event will be held at True Vine Ministries Church at 65 Southbridge Street from 2 pm to 6 pm under strict social distancing rules.

"Those who can’t make it for the physical event can donate through CashApp and all donations will be highly appreciated," said Pastor Njuru.

She is a doctor. There is the state pandemic help and her employers did not or should not have stopped her wages. And then there is insurance. Essential worker help. Massachusetts has several programs to assist before we fleece Kenyans who are now helping relatives in the old country.

Truth is that a lot of Kenyans of lesser means are struggling too. Let us not even mention those without papers. While the spirit of Harambee is great, some communities abuse it. Then shame and guilt those who do not participate. Harambees should not be called simply because someone is friends with a few influential people in the community. Feel free not to come to my funeral. I will be dead anyway. That is the threat Kenyans use if you question as I am doing now.

These Harambees are a nuisance. People struggle with them because they do not want to be shamed. And Kenyan pastors are the worst in lacking common sense; kuomba omba watu pesa kila mahali.

Hehe...
I remember a pre-wedding in Worcester a while back.
Kenyans raised close to $50K for the wedding.
On the wedding day the only thing that seem expensive was a rental limousine.
Being a financial analyst, that wedding cost less than $15K.
Honeymoon they went to Kilifi having done told everybody they'll be going to Hawaii.

Black people (Africans In particular) believe in free stuff ( bwerere bwerere) whether it’s a path to heaven , or hell, blacks believe doors should be wide open for them to get thru FREE. It is what it is, you don’t donate they will label as shetani or mtu mbaya. ( I know and see some of these harambee goers who simply go to eat all the chapatis, chickens & Mbuzi ) at the end they just donate $10 ( only ten dollars).They victimize the victims more and more leaving damage behind, some even carry out to their Toyota’s parked illegally outside, they turn harambees into free buffet, Anyway let me stop here.

@ Seneca, i completely agree with you. these harambees are too much and its whom you know and who knows you.Wacha ikae. The other day a friend doing fundrasing for an aunty who died in kenya..you just find your name in a whats up groupo ya matanga, surely how much is funeral back home that a person here cannot raise than pester people... this is shady business in the making in the name of matanga..its abusing people

'she is a doctor. There is the state pandemic help and her employers did not or should not have stopped her wages. And then there is insurance. Essential worker help. Massachusetts has several programs to assist before we fleece Kenyans who are now helping relatives in the old country.'

Note to everyone that has a job you should have saving that can cater for six months God forbid life was to happen. With that said I agree with the above Kenyans have become too much with these fund rising. And with the COViD we are all struggling.

I can't speak about other states but in my state,health care workers who contracted Covid while on duty continued to receive their pay during hospitalization/recuperation.