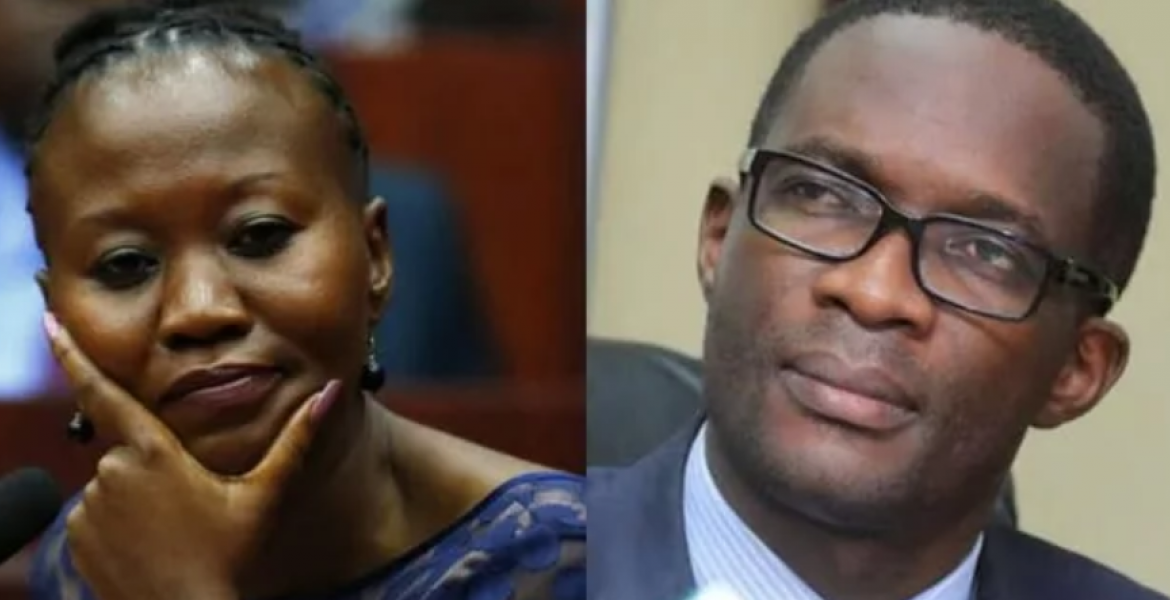 Akombe through Twitter on Sunday posted a screenshot of a threatening e-mail message she allegedly received from Chiloba after announcing she was ready to testify before a Judicial Inquest into the killing of Msando.

“Dear Roselyn, do not attempt to rewrite history, our silence is not your silence, yours, Eza,” the email message from Chiloba read.

On Friday, Akombe claimed that Msando was led to the “slaughterhouse” by some of his colleagues at IEBC.

“Painful that instead on this day three years ago, your own colleagues led you to the slaughterhouse. Like Judas, they sold you for thirty cents. We will find justice for you, no matter how long it takes,” Akombe tweeted.

Msando, who was the manager of ICT at IEBC, was found dead in Muguga Forest in Kikuyu, Kiambu County on July 31st, 2017, a day after he was allegedly abducted in Nairobi by unknown people.

His mutilated body was found together with that of 21-year-old Carol Ngumbu, with postmortem examination revealing he was strangled to death.

His abduction and murder came a week before the August 8th, 2017 general election in which he would have played a key role. Three years later, his family and friends are still demanding justice.

Akombe says the threat from Chiloba “confirms my call for an inquiry. Kenyans deserve the truth. I owe it to you."

Akombe fled to the US eight days before the October 26th repeat presidential election from where she announced her resignation from IEBC. She claimed her life was in danger, and later returned to work for the United Nations in New York.

This aging Luo single lady is going through menoupouse and an identity crisis. If she knew anything, she would be giving specific details, not general accusations that anyone can make. She is just craving attention, like her tribemate, Miguna Miguna.

Akombe is a survivor of a demonic cult. She needs to expose the cult and it’s victims.

Kenya government is a demonic cult. It should be exposed by its survivors.

What difference does it make whether she is Single or Double? And how would you Feel or React if a Person you Knew very Well (or Close friend) got Killed that like that? Won't you Hurt, Mourn, or Quest for Justice in one way or another? This exactly what Ms. Akombe is doing. Let her be; let her do her thing.

Why can’t y’all haters shut the f*** up and give this matter a chance even if it sounds bizarre to you! Obviously this woman ain’t your average Kenyan, she’s an accomplished in her own terms and has a prestigious job! If she was NUTS as y’all describe her, then, how come she’s highly respected in her place of work? Give this cold murder a chance, Msando’s family deserves some answers no matter how long this case will take!

No, no, nooo! Akombe is not Luo! She is a very aging Kisii idiot! Please leave our decent Luo women out of this lunatics mess! Our luo women know better! Okombe would never qualify to be a Lou woman! He mouth is too lose! Thank you!

I totally agree with you @settled normad! But, please allow me to make one correction here! Akombe is a Kisii woman not a Lou woman! Luo women can be mouthy but they are no dummies!

Maybe you can equate to CJ Maraga’s recent outbursts! They both lack good manners!

Miguna Miguna is just a unique beast! But give him a bit of a class! He can’t be like his sister @akombe!! She is in a league of her own way below the idiots!!

Akombe should respond:
There is no loyalty among thieves.
Good day to you too.

Why would you get death threats for exposing a killer of your workmate?

Akombe escaped a cult that is full of serial killers and so of course she will get death threats from them.

The Kenyan government is a demonic cult and it should be exposed by its Survivors.

A government job does not turn people into serial killers. Joining a cult turns people into killers.

Akombe has gone nuts. I think she is sexually starved due to difficulties of getting a mate at her age in the US. Coronavirus ina mambo. She is craving for Kenya in search of sexual escapades. Good luck madam Akombe kombe ngo'ombe.

Stop projecting your sexual deprivation on other people.

Akombe escaped a demonic cult that had lured her with a job.

She needs to tell her story and help other victims of the demonic cult.

Chokora! Who told you Akombe doesn't have a man in her life? Or who said that because she "single" then she should Persue Justice for the Afflicted or Aggrieved?

Settled nomad I agree with your views

Kora panini you're asduming and making a Fool of youself. Sponge is no what ypu're thinking.

All i said was chuma zipo...pesa anazo..sio?
But with all deal respect if she has anything to say...call DCI..CALL KINOTI..
ALL OF US WANT JUSTICE SERVED.
I CAN ONLY IMAGINE WHAT MUSANDO'S FAMILY IS GOING THROUGH.

She got chuma already! As for Kijana - Forget it! Men are not that naive and desperate!! Marecani women mob!!

Akombe should testify to what she knows about the murder of Mr.Msando. His mother grieves even today for the loss of her SON.His wife is a Widow today as his children are fatherless. And for what?, just because certain group of people want to stay in power at any cost.WACHENI MATUSI NA MFAHAM YA KWAMBA MALIPO NI HAPA HAPA TU

Just as all of you are expressing your opinions of which some seem ridiculous,she is entitled to express herself.

Many of you on this Forum (including Ezra Chiloba) sound ACCOMPLICES in Chris Msando's murder. Lord have Mercy on You for You Know Not What You're Doing or Saying.

Roselym, leave these ignorant idlers alone. Let the truth out.

Unfortunately, you are unable to see a liar for who she is! This woman is smooth operator and a manipulator. Akombe is not telling a grain of truth! She just want to settle some scores with those she left at IEBC! Very sad indeed!

@Ezra and Chebukati - both of you need to lawyer up very good!!! All indications from the mad woman @Akombe are directly pointing 10 fingers at both of you and maybe more!

When a mad woman start cutting lose (farting) in the market place, every devil start running! Her demons have been losed!! Remember Ihuona in the novel “ Things Fall Apart”!

Beware Chiloba!!! You can’t stay naive anymore! The Lucifer is coming your way in full sunami force! Protect yourself!! Lawyer up!!

@Chiloba - it is pay back time from whatever you willingly took from under the skirts of Akombe! Sorry bro!! She is coming at you!!

The screen shot I read from Chiluba to Akombe is not threatening at all! Akombe is reading a little bit too much from what Chiloba meant!

Akombe is trying to revenge on a past sexual relationship gone bad with Chiloba! This woman has a PhD but she can’t even understand some simple sentences!! Really???

Is Akombe working very hard to undoing herself while she thinks she will hurt others and gain notoriety? Time will tell!!