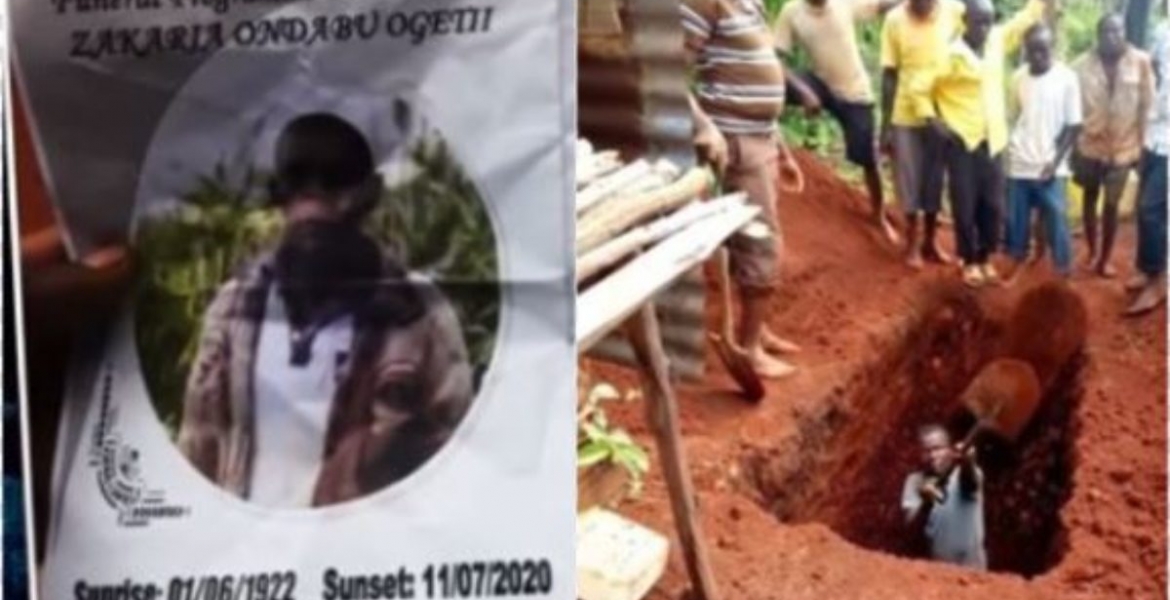 A Kenyan family from Mwamarita village, Kisii County is in shock after learning that their son who lives in the US faked his parents’ death to solicit money from friends and well-wishers.

Kenfrey Ondabu of Texas is said to have printed fake obituaries and death certificates in collusion with some people back in Kenya.

To further support his lie, he printed photos of men digging a grave where his ‘deceased’ parents were supposed to be laid to rest and a funeral program.

Ondabu used the fabricated documents do deceive his friends in the US into making contributions towards his parents’ burial arrangements in July. It is yet to be established how much Ondabu raised from his friends,

But Ondabu’s scheme was exposed after one of his friends, who also resides in the US, traveled home in Kisii only to find his parents are alive and healthy.

Zacharia Ondabu, the suspect’s father said the family was not aware that their son conned people by faking their deaths. He wants police to conduct a probe into the matter.

"We want to know who printed the papers lying that we were dead," Zacharia told Citizen TV on Thursday.

Reports indicate Ondabu may have conspired with a local chief and other people Kisii to produce fake death certificates.

Another family member said: "We want justice to be served and if it means going to court, we are ready."

U got to give him an A+ for comimg up with this con.

How many times have I warned about some of these Texas Bastards? Let's see how @Maxiley is going to defend this man (like he has defended his other 13 disciples in HstnTx).

Why do you call them his disciples?

Don't point at texas, this is everywhere in diaspora sites. Ask yourself Why do we have to advertise deaths in Kenya on diaspora site? I do see that as a way to just raise money for most people personal use nothing different from this Texan guy. Bastards are everywhere.
The more we misuse our dwindling funds meant for diaspora the less willing people will be contributors to real diasporan problems. Funeral in Kenya are not that expensive to have cash app and routing numbers plus usa pastors organizing harambees to raise funds to transfer the deceased from city mortuary to langata. We need to sacrifice towards some of our Kenyan funeral without involving others who are stretched to the limit with cash apps otherwise we are abusing the generosity. It takes a village to conduct a funeral in Kenya but takes generous contributors to do one in diaspora. Get me I am not responding to disrespect the death as that's where I am heading.

It is about time for those conning in the diaspora to start living within the means and stop these high crimes of conning others!

Kenyans in America used to be respected but the kind of shady dealings most are conducting there is rapidly causing them to lose the pride of being good citizens of the world!

So regularly in these days you keep hearing of a Kenyan conn being arrested. Others are milking their fellow men by starting some bight tech conn groups that are registered to make sham schemes sound legitimate! People - stealing is stealing - point blank!!! You can’t register an organization with a clear intent to collect ton- load of money to benefit yourself. Aisha!!

Are Kenyans in the diaspora going the same route that caused the Nigerians to become conn suspects world wide??? How do you feel bragging around with money you have conned from hard working fellow diaspora? Hii Tamaa ya pesa - is it worthy it????

Yes, let us all join hands to stop the madness of stealing (conning others) to preserve the good name Kenyans have had across the world! Surely every body got to be tiffed off by a country man/woman thief?? A conmanwoman is a predator that ought to be stoned to death!

Surely, this is not who we are as Kenyans in the diaspora!!

@ Guest 1,why would i defend such a scondrel? Iam shocked and disgusted that ahuman being could do that.Guest1,ihave defended consenting adults engaging in tge sexual escapades. Surely the two are not on the same par.Come on guest1.Try commenting before smoking that mind bender...

Conning others in the diaspora have become a normal occurrence and it is frankly getting out of control!

It all started with Kenyans coming up with some social groupings in the name of agitating for the rights of Kenyan diaspora to the political class back home! They tell us they want us to vote in Kenya but never accounts for the money contributions made to support this venture!

Then it ventured to forming shady business enterprises where lots of money is collected to buy land in Kenya and then the conmen/conwomen disappear. They will even tell you that they will help you get rich quickly by buying and selling Tanzanites.

Then there is the group collecting money to fund education of young Kenyans in the diaspora. They will tell you oh we are sponsoring orphans in Kenya and a few of them have done very well in Major in major national exams and now we want to bring them to the diaspora to further their education mainly in medicine and law.

Then there is another know group led by a shaggy guy called Martin Lutta in Houston scamming kenyans into starting Home Health business. He will charge you arm and leg while he is working with akata state agents to make sure you never get the licenses he promises so you can start the Home Health Business. This Martin here is a certified Luhya conman and have run away with millions of dollars from Kenyans, Nigerians and other Africans! Beware diaspora folks wanting to venture into home health business especially in the Houston, Texas, Area!!

Now there is a group collecting money (shs 200 million) to support the government in covid19 war! Imagine part of your shs 200 million going to Kenya to build apartment complexes for your buddy in the diaspora!

And then there are the new breed of preachers of gospel who are enriching themselves collecting sandaka every Sunday morning in make shift churches! You will give willingly to support the Lord’s missions but some guy is channeling God’s gift into personnel expenses! This is a huge one folks!

Then fake lawyers, eg Senator Susan Kihika, etc. The state of Texas is the main conglomeration hub for diaspora scams!

Folks, the scams are more than anyone can count in the diaspora! Do not allow these greedy folks to conn you of your hard earned money! Be wise and think several times before you willing part with your money to a conn! Period!!

Even Agīkūyūs can not come up with this below the belt kind of lies.

Zac Ondabu is not the only conman in America! There is a well oiled network of diaspora conmen/women in America.

Conmanship is a well established business within the diaspora community, mainly in the good USA!

The same scams you see in Nairobi have taken big roots in the state of Texas! You will be very surprised to know how many diaspora members are doing these shoddy money stealing scams! Some are your next door neighbors and some are professional, even with PhDs!! That is how bad it has gotten!

Don’t be lured into something you don’t understand! Don’t give to anyone on account of death back in Kenya - burying a relative in a Kenya won’t cost more than $5000 (shs 500,009) in Kenya!

If someone in America can’t afford $5000 to burry a loved one back home, you should know that individual is lying to you.

The problem with 99.999% of the Kenyan diaspora is lack of integrity, honesty and accountability! Diaspora Kenyans will play mathematically damn when it comes to collecting money! No one lays a plan and a budget! They never tell you what is plan is and how much money is needed to cover the cost! Don’t you think that someone living away from home (Kenya) ought to have a plan for a rainy unknown day(s) ahead!? We must tell the truth to stop these conns from stealing from other diaspora Kenyans! We must!!

No one should be buried with a coffin of gold if there is money problem! If you did not think that person needed to live a life luxury when they were alive, why the gold and bling bling when they are dead????? Stop covering the shame at the burial cites when the dead lived a very shameful life here on earth!

You don’t have to be in Kenya to know how your keen is living! You know the problem and should fix it so that keen can live a longer life!!

The dead can also be cremated for shs 25,000 or less! And remember this, no one in the diaspora that is traveling to Kenya in the covid19 times to burry the dead!!

In a nutshell, Don’t be conned while you watch by your fellow greedy diaspora! Use your general common sense to assess what the dude is telling you and to decide the nonsense a diaspora is passing on you to you.

We have come to this ugly point in time where diaspora Kenyans have sold their souls to money! We must fight this conning act with the severe pity it deserves! We must turn the scam artists in to the authority ( a con will be deported with citizenship, green card or none in America)! There is nothing to fear when a Kenyan is doing wrong next to you! Conmanship in the diaspora must be stopped by all means!!!

Time to be self sufficient with this buria) stuff