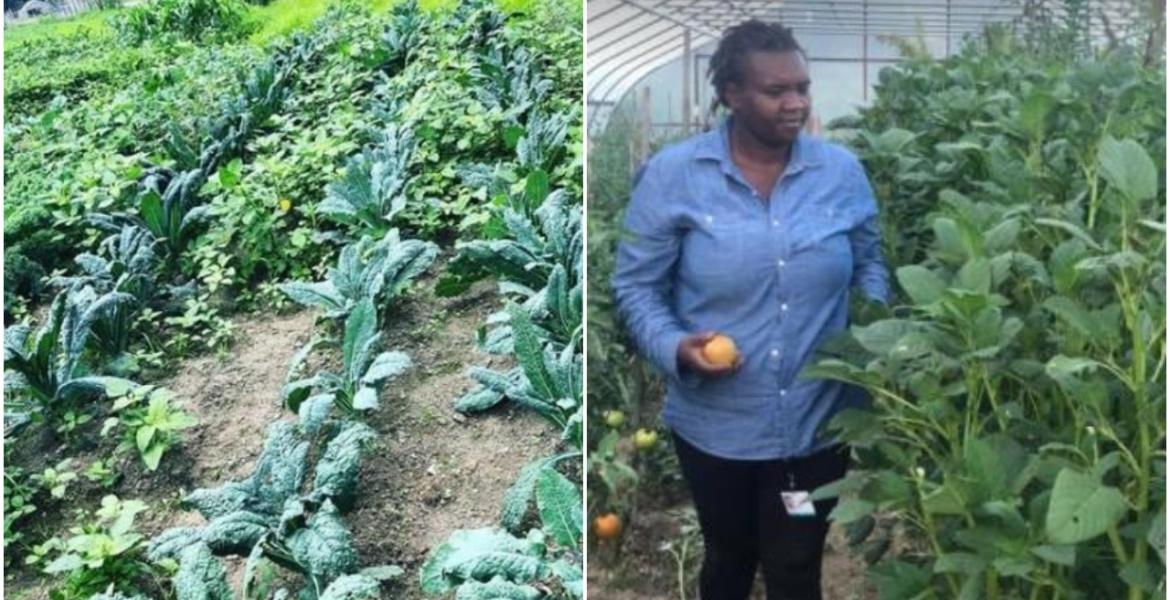 In 2018, Kenyans were ranked as the third most industrious immigrants in the US behind Ghanaians and Bulgarians.

Kenyans scored 73.4 percent to emerge third in the list of hardworking and most skilled immigrant groups in the US, according to the report compiled by Bloomberg.

Henrietta Moraa Isaboke of Massachusetts has proved that Kenyans in the US are indeed enterprising and hardworking.

Moraa, who moved to the US 19 years ago aged 13, is reaping big by mainly growing traditional vegetables such as managu on a one-acre parcel of land.

“My father obtained a green card in 2000, I was 13 at the time so I didn’t have a choice of whether I was moving or staying,” she told Kenyans.co.ke in a recent interview.

The idea of farming originated from her mother who started a small kitchen garden in 2006 where she grew vegetables for family consumption. She later expanded the farm and was able to supply vegetables to friends in Massachusetts and neighboring states.

“She used to grow small things that were readily available here like collard greens, kale (Sukuma wiki), Swiss chard (spinach), and tomatoes. Soon after she was able to provide vegetables for families and friends that were African especially Kenyan who lived in our state and some from surrounding states like New Hampshire,” Moraa explained.

Moraa later joined in to help her mother in farming, a venture that has resulted in immense gains for the family.

“It wasn’t hard getting customers for our traditional vegetables. I would just go outside a Kenyan church and after their Sunday services, they would buy the vegetables. 98% of the time all the farm produce I had would sell out failing to meet demand.”

World Farmers, an organization that helps immigrant and refugee farmers in the US get access to land and market, came in hand for Moraa and her family.

“We usually sell to World Farmers wholesale and they distribute to buyers throughout Massachusetts. This way, we do not have to individually venture into the American wholesale market.”

What challenges did she face?

She says “…. planting on such a large scale is difficult due to time constraints without the proper machinery. Man and woman power is not enough with a Jembe in most cases.”

Moraa, a mother of two girls aged nine and two, admits the venture earns her family some good cash.

“The thing about farming is your ultimate boss is the weather. We only plant 5-6 months because of the changing seasons. We do have a High Tunnel (greenhouse), which allows us to extend the season a little. As for how much we make let’s just say it’s enough to keep me going back year after year.”

Besides farming, Moraa has two full-time jobs. She works in an assisted living facility during the night and as a therapeutic aid for autistic individuals during the day.

“I am also a graduate student at the Southern New Hampshire University pursuing my Master’s in Public health,” she says.

Her family members including her mother Veronica Nyaigoti, father Henry Makori brother Entricus, sisters Valerie and Immaculate, and cousin Violet Guto are involved in taking care of the farm.

“I would love to expand my farming venture so I can be able to have enough crops to meet the demand and be able to supply across the US and Canada. I am hoping to one day own my own farm and of course like most Kenyans in the diaspora I hope to one day be able to go back home and continue my farming. With everything I am learning and continue to learn, I think farming would be the best thing to retire to,” she noted.

Her advice to Kenyans in the US aspiring to be farmers is to first do research in their areas.

“…there are so many resources available to farmers if they take the time to look around. We have many organizations that host community farms or gardens across America for very low cost and that would be a great place for anybody and everybody to start.”

“For those that own their own homes I would say turn your flower gardens into vegetable gardens there is nothing better than eating food that you grow yourself, especially now that one never knows what chemicals are put in the foods we eat.”

What is the point of farming if you still have to toil madoubles.

This guy writes these stories
for us drunk? Makes spelling errors many times

GO GIRL GO, HOW CAN WE BUY YOUR PRODUCTS?

Collard greens ndio Sukumawiki not kales, which has wrinkles.

Good job girl. I grow some vegetables in my backyard like 'Dek' and they really taste good.

Doesn't sound like a sustainable venture if she still has to be employed. Go back to the drawing board Moraa. Sustainable entrepreneurship needs alot of strategy then you won't have to work for other people.