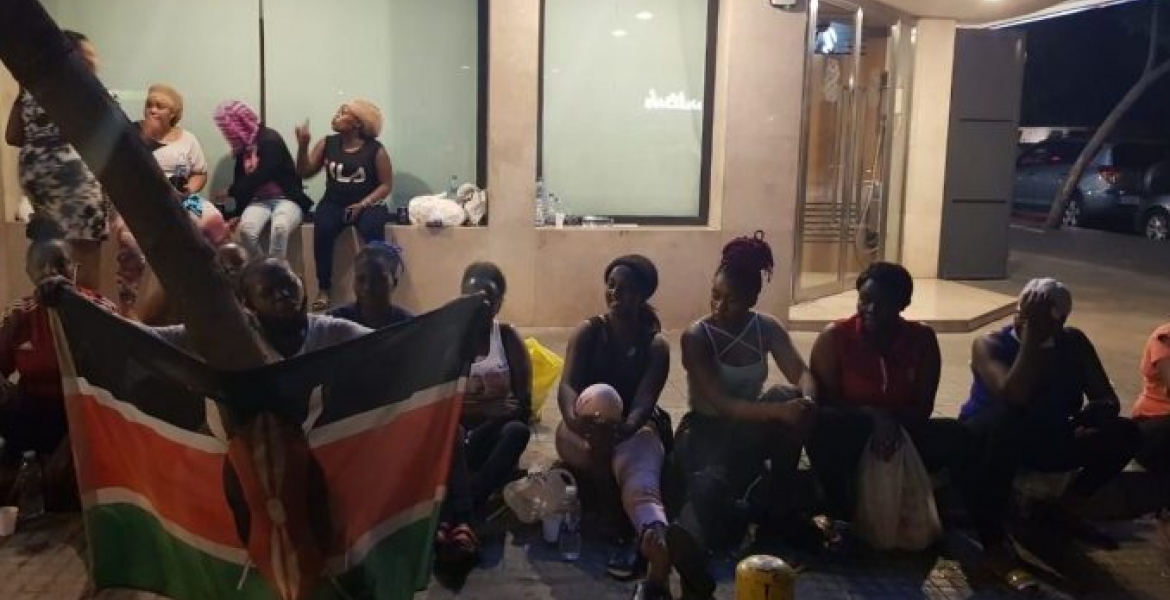 Imagine working abroad for nearly a decade only to return home without anything. This is the story of Teresia Wambui, a Kenyan mother of two who recently returned to the country from Lebanon after nine years.

Wambui, who hails from Thika, Kiambu County moved to the Gulf nation in 2011 with the hope of securing her future and that of her two kids but ended up wasting nine years of her life.

Soon after she arrived in Beirut, her employer confiscated her passport and would later learn that she had “been bought.” This was the beginning of a miserable life characterized by sexual harassment, torture, mistreatment, and racial discrimination.

She says she learned to appreciate simple things such as getting out of the house freely, making phone calls, and meeting friends. She was always monitored whenever she went out or made a call.

“I was not allowed to eat with them, touch their children with bare hands and I would work from 5 am to 1 am. It was exhausting and I was suffering,” she told Daily Nation in an interview.

A few years after her arrival, she visited the Kenyan Consulate in Beirut to seek help in processing travel documents but she was asked to pay $2,000.

She could not raise the amount and was forced to remain in the country until this month when she returned to Kenya alongside a group of other Kenyan women stranded in Beirut following an explosion in August.

For Wambui and several other Kenyan women in Lebanon, the August 4th explosion in Beirut was a blessing in disguise. Following the deadly blast, they camped outside the Kenyan consulate and after weeks of protest, the government facilitated their repatriation.

“I may not have returned with anything from Lebanon, I’ve come back empty-handed but I’m happy. At least I returned alive and with my children,” she said.

Hold your head high because others went and did not return alive.
The government of Kenya does not care for its people outside the country and this is yet another good testament.

So called hospitality business in the Middle East.And people are still being recruited to go there .Somebody made a profit out of your suffering time they were made to pay.

She wasn't working, but held as a slave

Pay $2000 to get travel papers! My foot! You are trying to get away from slavery and a fellow privileged Kenyan earning a hefty check asks for a bribe? Are Kenyan Embassies abroad revenue collection centers? Why are most Kenyans so greedy? Why do we want to take advantage of our own suffering people? No wonder we have earned the label of being one of the most corrupt nations on earth. Pole mama, the good Lord will give you a new beginning.

All this slavery in the Arab world started with Jubilee Govt. Na mnasema hapa mambo ya legacy! Chinese ndio hao canning Kenyans in their own land.

The editor and most Kenyans need to deal with the reality that not everyone can succeed in the diaspora or Kenya for that matter. What's the definition of success anyway, money?

What type of government charges distressed, human traffic victims any amount to get travel documents? Treat your citizens with compassion.

Wambui karibu nyumbani.Ur not alone many in diaspora r slaves.Working 2/3/4 jobs to survive,some left their families in kenya including kids n husband/wives n more than 10yrs r still stuck so hio ni modern slavery juu yr families should mean more than majuu life n papers.If u struggle for maximum 5 years nauliacha watoto nyumbani u should pack n leave.Have a plan b n c always.Lack of mapapers should never ever b an excuse why one shouldn’t b returning to his kids or partner.Ukifika majuu unakula tano unainvest gichagi 5 for that shitty day.But as someone said here Wambui ur lucky to come home alive n trust me if u open yr eyes more hapa kenya u will make a living.Visit Pete Redhill farm nitakutafutia kajobs kakufanyanga

Did CS Chelugui read this story about his highly advertised hospitality jobs in Lebanon? Chelugui should read this piece and then put his very ugly fat face to shame for lying to the youth! Why lie when people are being held as slaves in the Middle East! Why CS Chelugui?

She's lucky to be alive after cooking snakes and frogs for the rich slave traders.

No where in this world is safe. The conscious choices we make are all enshrined in fate and destiny. Success is relative depending on how you define it. A one my prof Dr. C once told me ‘not everyone is cut for life abroad, and not everyone is cut for life from where they were born’ There are Kenyans who are doing so well abroad, just like some are doing so well in Kenya. Home is where you feed your family from. Not where you were born.