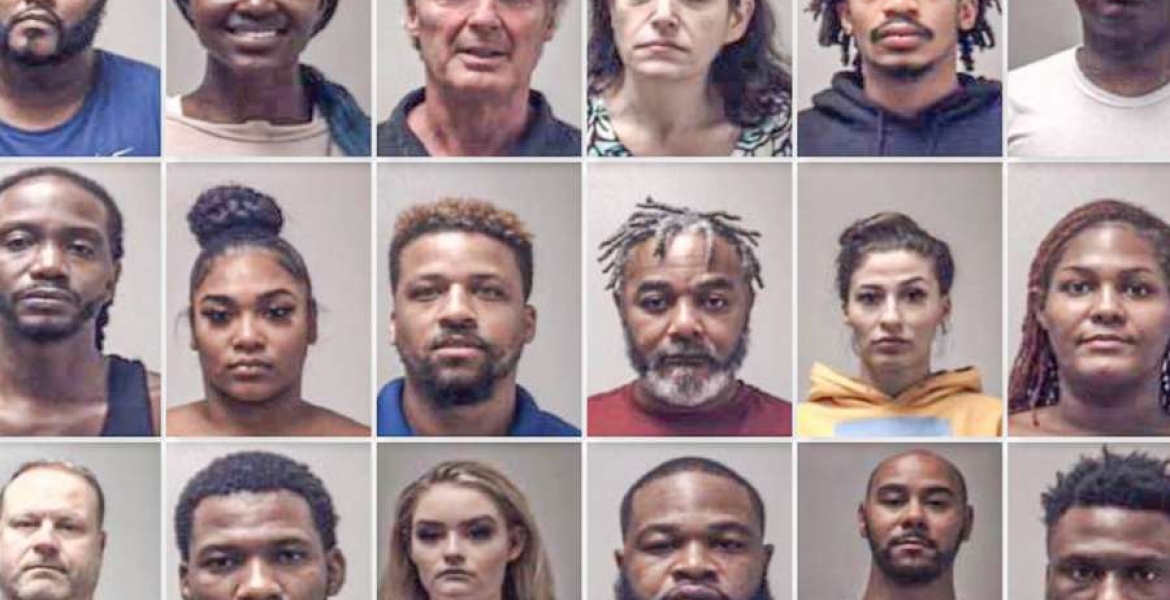 Lt. Edwin Rivera from the sheriff’s office said investigators then made multiple phone, video calls, and text messages to confirm commitments for the exchange of sexual acts for cash.

He added that crucial information was obtained during the operation to help detectives in investigating suspected human trafficking offense.

"Although we didn't get a direct outcry, there were indications they were victims of human trafficking and offered the appropriate resources,” he said.

"Our sole goal is attempting to locate victims of human trafficking. In order to do that, we have to arrest women who are advertising as escorts, and reverse that with undercover officers posing as prostitutes to get the John’s to come in."

58-year-old Malcolm Edward Durden Jr., who was charged with pandering and narcotics possession, was the only local resident nabbed during the swoop.

The Kenyan man arrested during the operation was identified as Bruce Ngatia Gikunju-Wanjohi of Lithia Springs, Georgia.

Mwakilishi put a circle around his picture. How can we know who he is?

What is done under the cover of darkness shall come to light.
That man's name is tarnished

Republicans are supposed to have family values. I suspect that man is a Mwakilishi democRAT.
#MAGA

Damn man! You're really cryin' out for attention! So what does your silly acronym has to do with this story? Well, there is a place to air out your "cry for help" grievances but THIS is NOT that spot!

Nonsense if they are adults and agreed on the terms of services the sheriff has no business charging anyone unless they can provide that service. Hypocrites they preach water but drink wine.This is the oldest profession,wacha watu wapige vitu.

@Ras Menelik,its all about SEX,and in any known human society,it has been regulated to a degree. Think about marriage.If women insisted on sex before marriage, prostitution would skyrocket.
Men drive protitution.They pay to ejaculate in a woman.And awoman has to charge for her body being used.Fair exchange,you say,probably,untill one finds out that his wife or girlfriend prostitutes to make ends meet.
Even where regulations are in place,there exists cheap underground business...As you can see two consenting adults dont operate in a vacuum. Social mores,customs, morals,and law come into play.All are created by man,and all can be changed by man for better,or worse.Unfortunately,or fortunately depending on your moral position so long as men have need for sex,prostitution will exist.

Wanjohi my man, u went for a happy ending and ended up in Jail.Well u still have ur hands idiot.

Ngatia, your deserve to get rear ended in jail! Bruh, you make us look bad out hear. If you can’t make love for free ... just rub it off, I have Vaseline for you. Now you know.

Gossipers meanwhile real criminals are out getting away with more crimes

If you want to know a Kenyan just check the Hair line he is the second last person.

Or go to a strip club and get lap dances in the private lounge.

Surprised NYO-TAA... ain't on there

Surprised NYO-TAA... ain't on there

Were they targeting Underage Children? If they are investigating Adults, how are they going to differentiate between prostitution and consensual sex? Are there no real Crimes in Coweta County worth investigating? An Idle Police Department. Waste of Public Resources.

If you don’t have the facts of the whole case stop tarnishing people’s name.