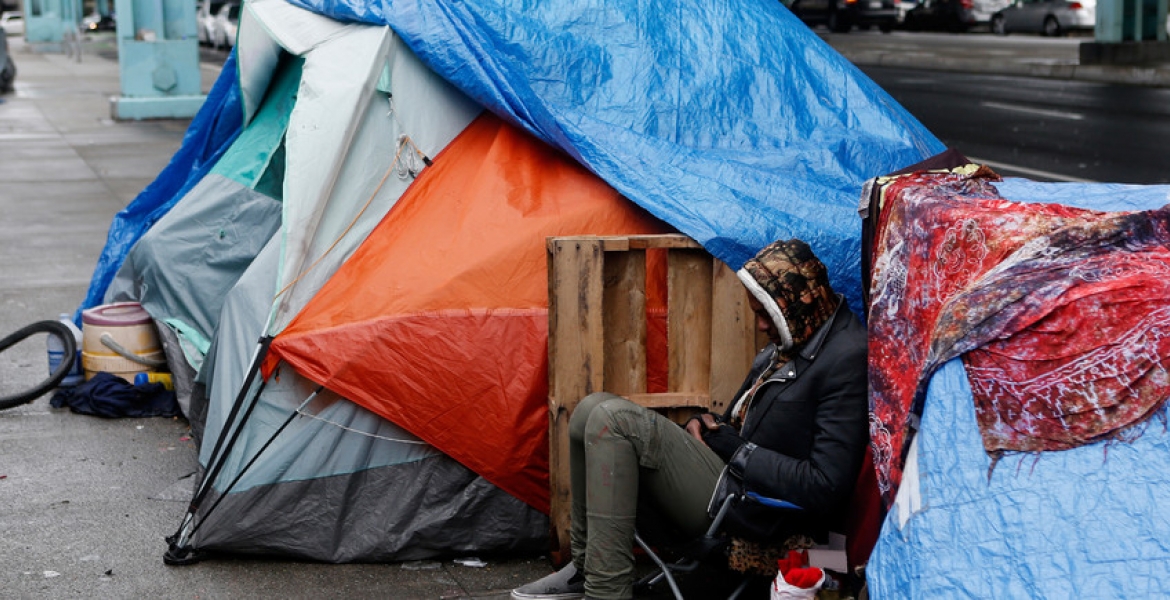 A homeless man in the US

The Covid-19 pandemic has disrupted the lives of many immigrants in the US and Kenyans have not been spared either.

One such Kenyan is Kariuki, who moved to the US in 2015 as an undergraduate student at Temple University in Philadelphia.

Speaking to Daily Nation’s North America correspondent Chris Wamalwa, Kariuki who hails from Nakuru County said all was well until Covid-19 broke out in the US early this year, leading to restriction of movement and shut down of schools, colleges, universities, hotels, and shops in the state of Pennsylvania.

“My mom, a hawker in Nakuru, raised the initial $10,000 for my tuition and that could only last me a semester and a half. Fortunately, I got a part-time job at the library in college but I still had to work at a local grocery store in the evenings and play drums for my church on Sundays where I was paid $100 every Sunday. Things were okay until Covid-19,” said Kariuki (first name withheld for privacy reasons).

He added: “My roommate, in whose name our apartment was registered canceled the lease and returned to Memphis, Tennessee to his family. For almost three months, I lived in my car. It was hard to find food. The nights were cold. I started developing regular panic attacks that left me feeling like I was going crazy!”

One day, police found him at the busy junction between Island Avenue and Lindberg yelling at motorists and trying to stop them.

“I cannot remember doing this,” adds Kariuki who says he was “stressed, depressed and contemplating suicide” at the time.

He would later wake up in a psychiatric facility in West Chester and was informed he had been there for three weeks.

“I was totally confused, and heavily sedated. I had nowhere to go but at least I knew I had to leave that place,” he noted.

He later decided to camp at Philadelphia international airport, where he would get food from a classmate who worked at an eatery that had remained open. Here, he would also enjoy heating during spring and cold air in summer.

He stayed there for months until recently when police rounded him up together with other homeless people and were taken to a shelter for the homeless on Island Avenue in South Philadelphia.

His story is one of the many familiar stories of Kenyans in the US whose lives have been made worse by the pandemic.

Ohio-based Kenyan-born counselor and clinical consultant, Abel Oriri said: “It’s, of course, true to say that Covid-19 has led to a significant increase and demand for mental health intervention due to anxiety and depression. In fact, recent research indicates that more than 53 percent of adults in the US have reported that their mental health had negatively been impacted directly.”

“Many report difficulties sleeping, eating, increased alcohol consumption, and substance use. Worsening chronic conditions from worry, depression, and stress over Covid-19. The anger management and domestic violence groups that I have been providing for more than 20 years have surged one hundred percent in enrollment since the pandemic began,” he added.

Washington-based Kenyan Pastoral and Clinical Counsellor, David Bulindah said the lives of many Kenyans in the US were disrupted without warning by the Covid-19 pandemic.

“Most people could not leave their job and or could not go to their second job. For someone who had been enjoying consistent income to suddenly lose all that, stress, anxiety, and depression thus kicks in,” he said.

“People should know that it’s okay to lose a job and it’s okay to experience mental health problems. Those affected should not isolate themselves rather, reach out for help.”

Most Kenyans in America are one cheque...one single mutha facking cheque away from being Homeless

The only time this Chris Wamalwa guy pens on something, its either the bad or the worse of us. I am a jua-kali writer, but even without going to school to learn the basics of journalism, I have a smelly writing nose that that senses that, in its curriculum, the professor teaches them about 'balance reporting', not bad and bad and bad. That's why Trump calls his tax expose...fake news. I have being tracking this guy for years and all he does is write bad things about Kenyans, excluding himself. But I understand that he got to get paid by the Nation. Just that, while writing about issues afflicting Kenyans in the diaspora, he should also, on the 4th paragraph or thereabout, continue his story with... "However, there are fellow Kenyans who are doing extremely well despite the ...." But Chris Wamalwa is gotta write a an imaginable story not just for the sake of it, but please his masters in Nairobi. Covid-19 has hit all and sundry, all over the world. Specifically selecting one geographical area to highlight universal issues is very unfair. And he ONLY enjoys the kind of journalism that pin-point Kenyans' mashidas, ma-downs, homelessness, joblessness etc just because his wallet is always well supplied. Living in America, or outside your motherland, is not a walk in the park. You see those Kenyans living well or driving good car, its hard work...I mean really hard work. If I was a nyeuthi, Iwould have told you in the face, "man-up". But for now, go write that MjuAji is broke from Covid-19 effects. Mmmmm!

@mjuaji - One thing you do not know is that what Wamalwa is writing here is his personal story in form of a third party! The guy get paid by writing horror stories to draw some audience!

If you have ever closely looked at this guy, he is just obese and seems like he is under a lot of stress from within! How do you expect such a guy to write anything positive about Kenyans abroad while he has a very poor image of himself? The guy may not even have deep pockets as you may think! What is what it is!!

Kariuki need to check out kenyans in PA and see if they can assist in housing. This deal of kenyan coming here and think its easy and isolate themselves. Get where wakenya wako and see how they can help. Then transfer to a junior college as it cheaper. And if you want to maintain both there is what you call co-current student junior college and University. Take lower level courses and high level courses in university.

Wow @gaki you seem to know everything about others except yourself! How do you know this man did not know what he was signing for coming to study in America! One thing I give credit is the advice of attending cheaper junior colleges and transfer back to an accredited University in the senior year! There you got a point pretty gal!

Let’s not be overly critical. What some of our Kenyan counterparts are going through could have happened to anyone. Covid-19 was/is not selective of who to strike on. Remember we are still not out of the woods yet. Kariuki’s situation is a sad one but not isolated. Too many of these stories been shared globally. Let’s do what other nationalities in this country do for their own and help each other out. If anyone knows someone in the Philly area that can lend a helping hand to brother Kariuki, do the right thing and make the connection.
2020 is a year that no one in our generation will forget. Like any war, there are survivors, casualties and those that perish. Let’s fight this covid battle as a community. Unlock your Future blessings by those who need help now. Love you all.

Most Kenyan in USA live in denial, had high hopes but when it does not happpen they don’t want to face reality

Use, that too! Nobody want to accept to be defeated! But at times, accepting a temporary defeat is an ok thing until you can regain the grounds again. It can be tough out there!

Very true. High hopes and ignorance when we leave JKIA. Without proper support, good company, and guidance, this country can swallow you like "Noah and The Big Fish." Vitu najiona hapa! Mungu anifunze kunyamaza

Does anybody know how i can get in touch with Kariuki or the reporter? I live outside of Philly area and we can try to help him out. I have heard of people who became homeless in this country and end up losing their lives. We shouldn't let one of our own loss their life if we can help.

Does anyone know of his full name? I live in PA as well, including myself I know that there are several Kenyans in the area who want to help him get back on his feet. We just need his name so we can find him

Does anyone know of his full name? I live in PA as well, including myself I know that there are several Kenyans in the area who want to help him get back on his feet. We just need his name so we can find him