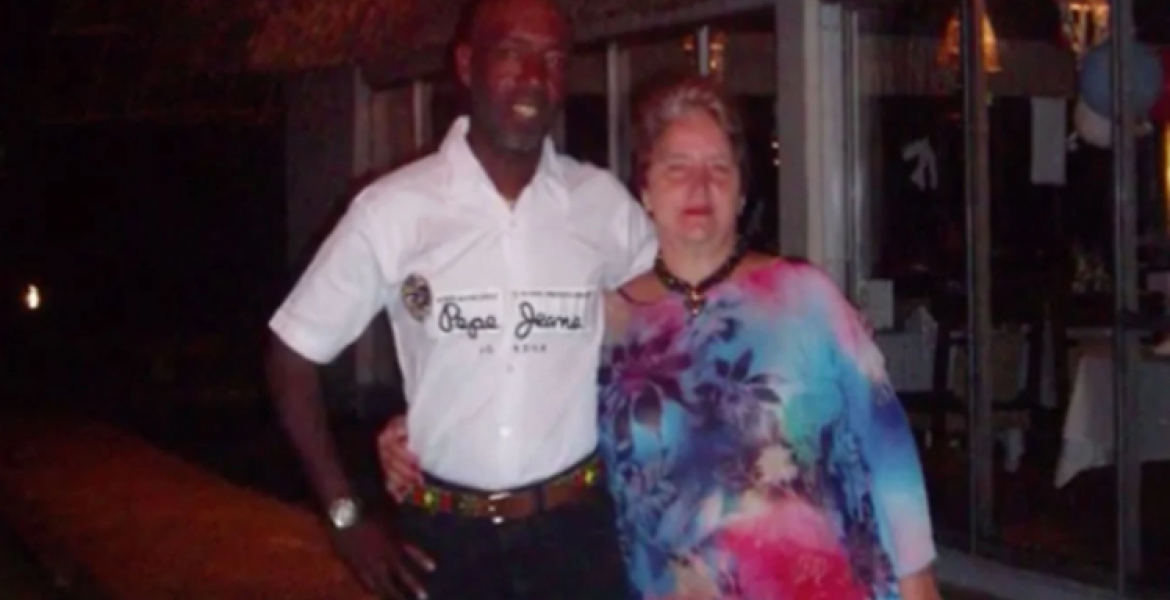 The late Abu Bakari and his wife Astrid

A family living in Switzerland is seeking answers following the mysterious death of their kin in Kenya.

The family from the Swiss city of Winterthur received the shocking news of Mr. Abu Bakari’s death early last month but the cause of his death remains a mystery.

Bakari died in Watamu, Kilifi county barely nine months after he returned to Kenya following his retirement in Switzerland.

The deceased’s widow, Astrid Bakari said the family received different versions of the cause of her husband’s death, which raises more questions than answers.

He is said to have drowned under unclear circumstances but the family suspects foul play since Bakari was fit and healthy before the incident and had even spoken to his family.

“One version claimed that he was carried away by the tide, another claimed he was trying to rescue a friend who was drowning, while yet another claims that he broke a toe at the beach,” Mrs. Bakari told ZüriNews.

The family suspects his death is linked to the Sh19.5 million (165,000 Swiss Francs) pension payout he received and which he gave a relative the full power of attorney.

Bakari was born in Watamu and lived in Winterthur for over 35 years before his retirement and return to Kenya in January. He worked for the Parks, Gardens and Open Spaces Department of the city of Winterthur (Stadtgärtnerei).

His three daughters have vowed to get to the bottom of his mysterious death.

Be like me, stay in Kenya but be deadly armed. Don't let low life take your freedom away!!!. Don't let them chase you away from your motherland, the place that God chose you to be born. Arm yourself legally like I have done, it's easy to get legal firearm in Kenya to protect yourself if your life is endangered. I am legally armed, lethal to anyone who dares to endanger my life but I am also harmless, best peace loving person you can come across. I can't even harm a housefly

Is it GREED OR INSECURITY??

Keep a low profile and you will be alright. The problems is when you become the preacher at the watering hole flashing all the Benjamin's to prove you've been majuu like being in the airplane is a big deal hence disrespectful. I got deported or deported myself in 2016 and I have been living both in shags and town happily ever after most people don't even know I lived in mid atlantic for 2 decades. I do what kenyan men do apart from drinking and hanging idle in the shopping center.

Kiihu, you got that right. Keep off, stay away, keep low, talk less, show less, confuse these thieves, lie low like an envelop. After relocating about 5 years ago,I became a rare confusing specie to track or pounce on. All Kenyans look for an easy prey. Run when where you can.

IdaVethi, I recall your Kiswahili posts in another online forum I few years ago prior to your relocation. Would to hear your thoughts on the pros and cons of moving back to Kenya. I am planning to move back in less than a year. It’s time.

Nani, you have to get prepared for many things simultaneously. I dont know how long you have been away, but if its more ten years, you are just a Kenya by name, meaning, you will be a stranger in a country you call yours; or simply, you are will be starting again from the scratch. Na nikuambie uso usoni, utaandamwa ni wengi wanaonuia kukupora au kula ulichokuja nacho.
Prepare yourself, Sir. First build or buy a home kulingana na mfuko wako. I assume you have a family. Ukiweza, jenga tunyumba or start something that could bring in something small for you at the end of the month before you arrive here. Dont come here with all the benjamins and think that you could invest instantly or do all this things at the same time. Zinaweza kuisha kabla hujamalizia. And dont just pack up you bags kwa hasira uje hapa. Starting a new life anywhere is not easy, even kwenu nyumbani. Pciking up or getting results fro what you started takes between 2-4 years at most. Kenya is a man-eat-man society. Once you arrive, depending on how are, go under for a year or so, and dont settle where you are well known. Kuwa unatembea huko tu. Dont rush to start any business. Take your time. I have tried several and all Kenyans want is a pie of your sweat. I dont know how old you are, but either way, dont show off that you came loaded, especially to your relatives, villagers, friends notwithstanding. Those people you used to help or someshas are useless, they will never help you. Ile 50, 100 or 500 hundred dollars you used to send them kwa kale kanamba .... After two five years, you will realize what 50, 100, 500 dollars was a lot of money once you wipe out your savings. Getting them to give or loan to will be unheard of. You will feel abused, misused and conned. Stay as low as you can. I pray that you had some investment here and there. That's good. There are the best shock absorbers to cushion you. Dont trust anybody, your mother, father, sister, brother, old friends...treat everybody with suspicion, even Idavethi. With time, you may pick one to hold your hand along. Dont buy a car and immediately start driving your self. Configuring your left handed brains to right hand scenarios will not be easy. Either buy and hire a driver or use Uber. Give yourself anything from six months. This is a chaotic country. When crossing the road, dont worry about motorists, worry about nduthis. Be ready to have food shock(foods here are very strong for your digestion system), culture shock etc, and a culture of very dishonest shameless people. Otherwise being at home have made me younger and less worries. I can go to church, attend social gatherings without getting worried about going to work or pay useless unending mountain of bills. I live a simple life. Bill yangu ni maji, stima, and phone scratch cards, which i can choose to buy or not. Unlike in the US where I used to have many bills excluding trouble-making credit cards and other loans. So much for that. You can give me your temporary email where you can ask me what i may have left out. Disclaimer: my advice might not work for you because your goals for relocating might be different, coz we are different individuals. Use it as a guideline or info center. But may work for you.

No need for a disclaimer. That is advice that is useful yesterday, today and tomorrow. Like nani?, I plan to return but in a few years. I replaced beacons with fencing and I am in possession of my title deeds, my will is written and notarized to avoid conflict, my accounts are open to no one but me. I had not thought about waiting on a vehicle so that is food for thought. Any ideas on the best most reliable 4WD crew cab pickups?I have become used to family friendly pickups and my day to day will require it

Red flag to all those thinking of retiring back home. Not only strangers but even close friends & relatives might do you in, true story. It's a tightrope if you ask me, my advice, proceed with caution!

@Kiihu how do you return to shags after 35 years and not get noticed? Whenever I return, word seems to go out rather quickly. As a diasporan whatever you do will bring criticism from some random corner. I missed the part where he was hanging out in bars, preaching and flashing cash.