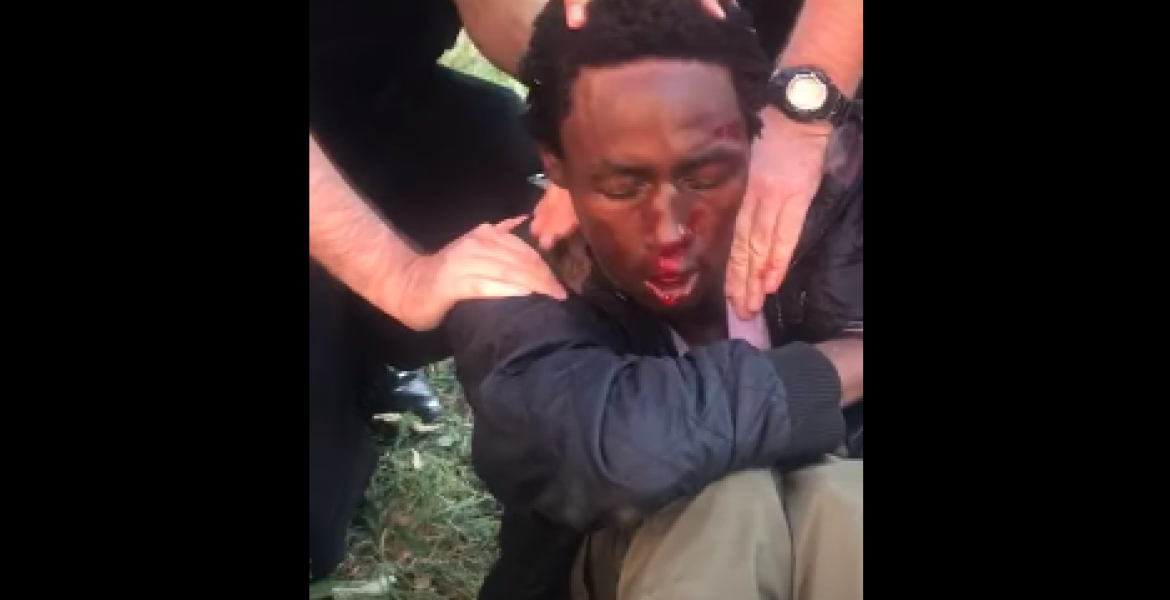 Police in the UK were captured on camera beating up a young Kenyan man in the presence of his mother.

The man’s mother said her son suffers from mental health issues but police officers would listen to none of it, according to an article published on www.kenyanparentsinusa.com.

The incident allegedly happened a few weeks ago in Essex, a county in southeast England.

“He was beaten and the mum had been denied the right to visit him for more than 3 weeks,” the article reads.

The woman whose identity and that of her son were not disclosed is appealing to the Kenyan community to assist her so that she can be allowed to see the son and have him back in her care.

“The police have warned her of dire consequences if she shares this Video, but she’s ready to face any consequences to secure her son’s freedom,” the article adds.

In the four-minute video, a group of policemen is seen pinning the young man to the ground and her mother can be heard crying loudly.

The man is handcuffed, legs tied and blood can be seen coming out of his nose and mouth before he is carried to a police van. It is not clear why the man was picked by the police.

“This is outright police brutality and making this message to go viral, can maybe reach higher authorities to act accordingly,” the article states.

Watch the video below; https://youtu.be/Ntp-xhABSZQ

The mother can seek lawyer services to file a lawsuit and help her secure the release of her son. Police fear lawyers..

Surely the level of stupidity and ghettoness Kenyans have abroad is beyond what one would call retardants. Will the screaming help the situation.? Ama UK Nduru husaidia? Bwana thats not kayole or gikomba.. pack your bags and go back where you belong.: Alafu mambo ni kuomba tuu ni kama mnatumanga kakitu..with all of you Huko Kila mtu apambane na Hali zake..na mkikuja hapa Kenya we cant breath na vizungu hazina msimamo.. Bure Kabisa.. Mbogi za ujinga

You sound like a bitter bitter man who has just relocated from Kayole or Gikomba. The video is saddening to watch, and while their plight may not directly concern us, your indifference and the subsequent elaborations ati "the ghettoness Kenyans have abroad..." Nyamaza! We ndo bure pekee yako! I swear you're probably one of those really uptight square jamaas who are (not-so-lowkey ghetto af! Nkt! You've even left a bad taste in my mouth.

U have to mature and don't judge people by what your family members do. Akikuja Kenya utampea job or u r just poor

Damn bro! You that mad??

"The RIGHT to visit"?

I see police trying to restrain a man who is bloody and spitting. Where is the assault? Placing a spit hood over his head now assault? Black people obey lawful police orders. When you are asked to stay still please stay still.

That is not what happened. Are you journalists?
The family is the one who called the police because the boy, who is batteling mental illness, was being a danger to himself and others.

Whenever the police are called, they are going have to subdue the person in question. He was not killed, it might have been a little excessive.

Omondi seems to have been born after the guy was brutalized by the UK police.I wish Nyako informed him that Kenyan police are worse.Nyako tell your brother how the Kenyan police are killing Kenyans for petty issues like not wearing masks or lack of ID.Tafadhali Omera ukae ukijua Polisi,awe wa Ulaya,United Kisumu ama wapi ni KATILI KULIKO MWIZI.NI MUNYAMA KWA YOYOTE/PAHALI POPOTE.

He is lucky this happened in the UK where cops are not trigger happy. If it were in the Donald Trump land, this young man would have been shot. So mum will see her son again at least but she needs to seek mental help for him if he is surely ill.