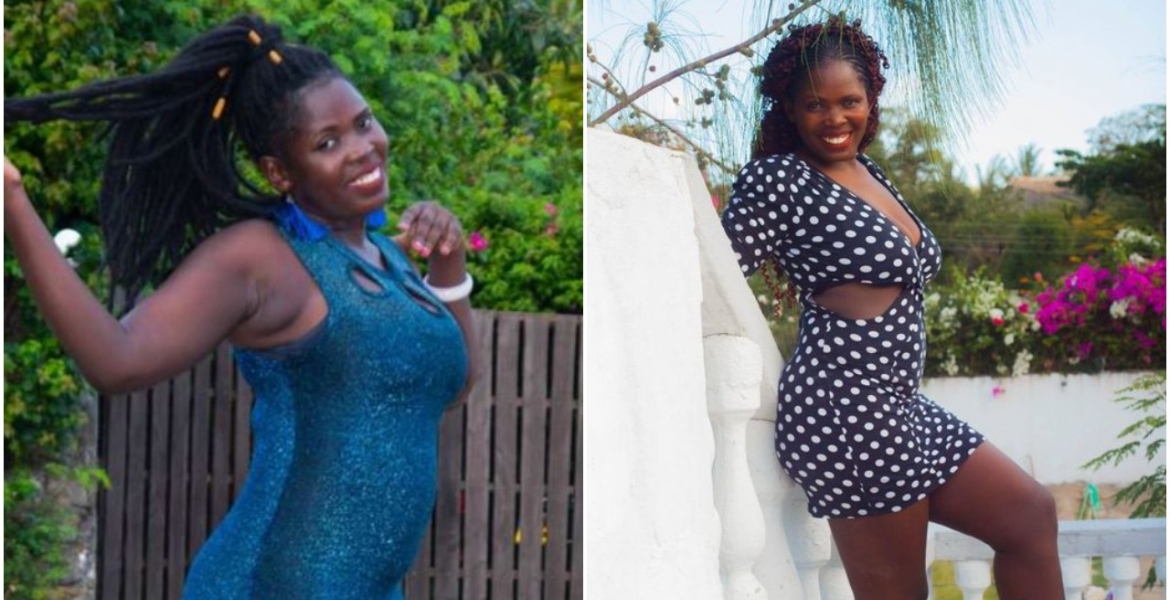 An upcoming Kenyan artist whose song recently went viral on social media has narrated how she was deported from the US after serving a five-year jail sentence.

In an interview with Daily Nation, Mercy Atis said she is trying to get back on her feet after she returned to the country following a painful experience abroad.

Mercy, who hails from Kisumu, moved to the US in 2005 to study courtesy of a sponsorship by a local church. She enrolled in a nursing course and was required to market Christian books of the church.

She completed her course and started practicing but things took a different turn after she was arrested and charged with arson. She was convicted and handed a five-year prison sentence.

“In 2009, I was arrested for arson and jailed for five years. What do you do when you are arrested in a foreign country? No family visitations and you don’t know anybody? You start looking for solace. I turned to music,” she said.

After serving her jail term, she was incarcerated in an immigration jail for nine months and deported to Kenya in 2014.

“I returned aboard a military plane from California, the USA to Kenya dressed in a hospital gown. I was accompanied by eight people including a doctor and a therapist.”

“There were no signs that coming back, a deportee, will make my life better as I had no money or assets to my name. However, on my way home, I have one resolve— to make it as a musician,” Mercy added.

Upon her arrival, members of her family were not welcoming, forcing her to live with a friend and do menial jobs and hawking in Kisumu to make ends meet.

She later met an old friend who offered to help her record her songs at an affordable rate but things did not work, forcing her to relocate to Malindi.

Mercy hoped her new song ‘I Don’t Wanna’ Know’ would be a hit but it turned out to be a nightmare for her due to hostile response from Kenyans online.

“When I shared my latest song titled “I don’t wanna know” on Facebook and YouTube through my stage name Mercy Atis, I didn’t expect to go viral…As an upcoming artist, this should have made me happy.”

“However, the first two nights were tough. I couldn’t sleep as I wondered why people were being so mean to me,” she noted.

But despite the backlash, Mercy says the suffering she went through in a foreign country helped her grow a thick skin.

“The five years I was jailed taught me to be brave and persevere. We were encouraged to start a new life for ourselves. What I wasn’t prepared for, is that sometimes, the same people calling for your change will be the same one mocking the process.” she said.

The song may have flopped but it helped her reconnect with a Kenyan friend who lives in California after losing touch for eight years.

The Stone the Builders rejected Shall become the Head of the Corner.

Could also be Anger problems or just Revenge. Some women have set their Husbsnds' or Boyfriends' Houses, Cars, or Clothes on FIRE in Retaliation of being Cheated on, Used or Dumped.

May it b a lesson that huko unaitanga kwenyu sio kwenyu.Make use of that chance u have in majuu to b smart.Never ever ever forget home.Buy a plot build a house wacha ikaange hapo u will never know.U may never b deported but yr wife or hasi can frustrate u big time nakama uko nakakitu utaondokea shetani mwenyewe.Buy cheap land which is everywhere Hata kama iko ndani ndani kabisa??Last year my cousin was deported after 26 years in uk.Jamaa alirudi bila nothing kizunguu mingi tu but he cannot even afford sabuni ya kuoga.Hata squatting to shot nishida??

Kwenyu kuna mkosi, you got deported and now your cousin.

I think you're right. Mkenya halisi Always sounds a Deportee.

You don't drive a car while using the side mirrors. You look straight ahead. Life is great ahead if you're determined and focused

Wewe wacha zako.🤣🤣🤣Dont you Think you use Side mirrors when Changing lanes; or to see who's following you, or if Traffic Police is about to Pull you over?

So, what are side mirrors for? Shaving beard?

Nyako was obeying her tribal god's(Raila) orders to torch any property belonging to his opponets.But she didn't know that impunity or licence to destroy was confined to Kenyan territory only.

Keep working on reinventing yourself. Some was not built in a day... All the best!

Alot of people r gonna be hia trying to encourage u n give u hope, not me as i will keep it real with u. U went to Cali thru a church meaning at one time u were walking hand in hand with the Lord, now u r shaking ur ass holding trees saying i don't wanna know.Sister i do wanna know what the fuck is goin on in that nugget of yours. U went to Cali to do nursing, completed the course n were working before maybe drowing a couple of Old English bottles that brought the Devil in ur corner n ended up in Prison. Got sent back to Kenya, sad ur family was not in ur corner but reading from ur story shows u r not a ngombe so am sure u can use ur nursing experience to earn money as not all of us were blessed with singing talent n since u discovered that in Prison, somebody lied to u .Take ur ass back to Church n maybe someone might hear ur cry n offer a helping hand. Yes u should know ur song sucks, ur voice can only be appreciated by an Ex_terminator trying to get rid of rats, feel bad for the trees that were forced in ur video but sister unless ur trying to be a comedian, music u should leave for the shower.

Bwahaha! You are evil Shaka. God forgive you

DON'T JUDGE AND YOU SHALL NOT BE JUDGED.
I won't judge.
Keep your head up. Do your best and leave everything else to GOD.
When driving you don't focus on the side mirrors, your focus is always on the windshield, you glance once in a while to check where you're coming from, meaning what's important is the journey ahead.
GOODLUCK SISTER.

Soldier on, ignore the nay sayers and do you.

Come on, sister, ignore Shaka. Continue shaking ass, since, from the photo, it seems you got a good ass

Keep your headup!! Keep up the good work. Your blessings are coming!

wow sad story dada yangu..sisi tuko hapa uzunguni FL USA and wale wanao jua venye mambo inaweza kwenda mrama know how this can unfold my advise to kenya diasporans in the USA kwa wanaume wenzangu vuta bangi ya kutosha and cut down on liquor wewe weka break ya mambo ya kuchapa kofi mabibi and for my sisters stop getting into toxic relationships unaweza nyongwa na wazimu or worse you can do something stupid like what she did and go to jail and then krome and lastly invest..invest..invest..invest back home buy plots for 2k.3k.4k or 5k jenja bed sitters..build ten then take abank loan against the title deed and use it to build ten more..keep doing it till you can generate 3k amonth then panda ndege one way ticket

You need a choir master to give you thorough training and guidance in singing! Wow, where is Simon of you got talent?? He would have told you the real truth of your new found talent in singing!! Hehehehe!!

How do I politely say this about your song? Well, the song and the singer literally sucks! Look at how you are dressed! Holy cow! I think you should look for a job in nursing to start your professional life all over!!!