Kenyans in the Diaspora Express Displeasure with BBI Report 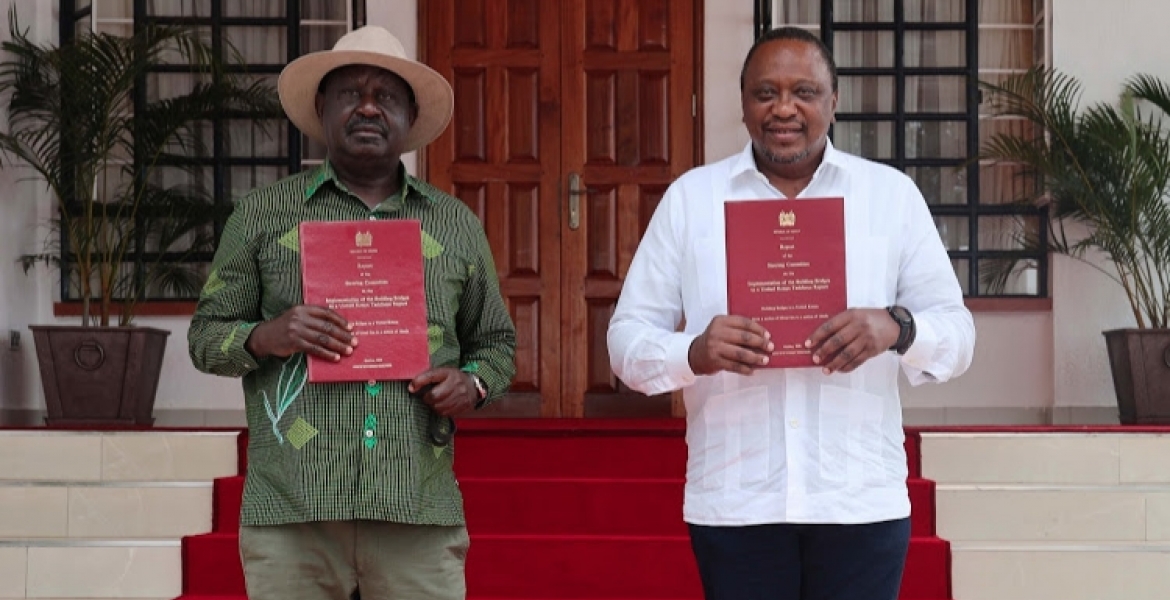 Kenyans in the diaspora have faulted the Building Bridges Initiative (BBI) taskforce for failing to include their views in the final BBI report.

The final report launched at the Bomas of Kenya on Monday did not capture any of the recommendations submitted by Kenyans abroad to the taskforce.

The diaspora community is now appealing to President Kenyatta and ODM leader Raila Odinga to address their concerns if BBI is about inclusivity as they claim.

“Our voices must be heard; our challenges and aspirations must be captured in the process of governance of our country. This is the surest way to feel a sense of belonging as Kenyans,” said Samuel Ondicho of Minnesota as quoted by The Star.

Mary Jacinta, a Kenyan living in Germany, said: “We matter as Kenyans. Relegating us to the periphery when we contribute massively to the country’s economy is a travesty to democracy, inclusivity, and fair play. We are Kenya’s frontline ambassadors and our ideas cannot be trashed as if we don’t exist.”

Early this year, Kenyans abroad made a raft of recommendations to the BBI task force through the Diaspora National Assembly (DNA), and the Kenya Patriotic Movement (KEPAM).

Among the proposals made by the two diaspora organizations was the creation of a Diaspora Constituency to handle issues affecting Kenyans living abroad in Parliament.

They also suggested a Ministry of Diaspora Affairs be created and headed by a Kenyan diaspora, similar to that of Israel and India.

Kenyans in the diaspora further proposed the removal of the clause in the 2010 Constitution that bars holders of dual citizenship from holding and running for public office at the level of a State officer. They termed the clause as discriminatory and a violation of their birthright.

They also wanted Kenyans abroad to be allowed to take part in general elections as stipulated by Section 38 (3) (a), of the constitution.

All they care about are the billions of shillings send to Kenya on monthly basis.

Stop sending money for 3 months and you will be heard!

Diasporas send money to their families! Not to all of us! They wish they could stop sending the money but papa na mama hapa nyumbani want the money. So how are you leveraging your opinions based on the money you have to send anyway??? Papa and mama will curse you if you stop sending the money - and we support them to do so cos we also benefit!

GG,you don't send money to the poop govt.You send it to your loved ones or projects.GG seems to ignore the fact that parents never borrow or beg for money from their children.They DEMAND it.Hakuna kupembelezwa bwana ata uwe nani.Other people send money to conmen led by fake bishop&Dr.Kariuki Ngari,Kithaka(FEP) etc.

While the inclusion of the diaspora is important, can someone tell me which other country in the world has a president, a deputy president, a prime minister and two deputy prime ministers at the helm of it’s leadership? Isn’t this just a way of rewarding tribes by lifting one of their own to eat the national cake? Sometimes we think through the ass.

This I can agree! We need to go back to chiefs on local basis, eliminate senate, cut MPs in 3/4 and eliminate leader of the opposition slot. It is too much redact in this government. Even Uhuru has shown us that he can run the government without Ruto. Why is Ruto getting paid while the only thing he does is campaign and issue some shitty wheelbarrows?

Cool your heels diasporans. The BBI report is going nowhere.

Y’all idiots in the diaspora (basically so damn truck drivers) are shit! Useless nyinyi! Wewe Kaa conjoined to your wifey trucks! Leave our Kenya kwa wenyewe! Si you ran away?? We don’t value your maddening views.

Ondochi and Mary - you can kindly stop sending money to Kenya. We don’t need your freaking money. Worry about whatever is going on in your new home of America and Germany.

You ain’t important at all to us. Nobody asked you to send the little money in your shallow pockets. Tembea huko hell and sort out your problems there before Trump get hold of your skinny ass! Na huyu wa Germany ni mrevi. Mary stay drunkard there!

The two organizations demanding to be heard on BBI are led by crooks! Give us a break!

We are not Indians and Israel to create a ministry of diaspora affairs like them. What wrong with these black- white Kenyans?? Now you have taken the place of wazungus to tell us what we already know. We don’t want wazungu opinion - this is 2020!

You left on your own volition and need to put your heart in your new home! Don’t tell us how to run our affairs while you have failed running yours!

Who made those demand on my behalf?Why demand a ministry and constituency?For who?What is the difference between those demanding nonsense and thoose creating additional 100+ MPs'seats for SERVICE women,PM & deputies in a corrupt country with limited resources?Do they know that thug Uhuru & Co.take expensive loans to pay salaries then loot the balance?The bloated useless govt should be cut by 75% starting with senate,2/3 or 1/3 gender poop and financing of private political parties owned by thugs Uhuru,Ruto,Kalonzo,Mudavadi,Wetangula and muuaji Raila.Do Kenyans know they pay Uhuru and Ruto shs 14m.per day for being JUBILEE owners?Raila is paid shs 10m.for ODM.The other NASA thugs get shs 1m.each per day.Pole sana hungry billionaire Kenyans.

I wonder why waKenya wenzangu want to pass the BBI with a parliment of 500 MPs,100 senators and 50 governors,ati Kenya I.we kama USA.All other nonsence can be passed by Parliament without wasting shs 15 to 20b.which kina Raila and Uhuru want so that they loot 75% of it.The same demons recently looted shs 78b.loan meant for COVID patients.

The irony and stupidity I have read on Mwakilishi is someone saying how "useless diaspora truck drivers are". If diasporans mean nothing to you, what are you doing on a diaspora website? Just login to Nairobi or tuko news and read all you want about your fellow Kenyans. Leave diaspora sites to diasporans.

You sound so mature. No need for me to talk much on this. You made summary in a brief & precise form.

No one should use abusive words, not to those in the Diaspora or those in Kenya. That is if we are communicating because we love our mother Land. Our Leaders are a reflection of our own selves; sorry but it’s the truth.
Who appointed Diaspora representatives.. How do we even allow a criminal sitting in Nairobi to lay Claim to Diaspora leadership?
I support BBI. I want a small Government, less or no Thieves. Why do we need 1,450 MCAs and 350 MP’s? 60 Senators, then CS, County Commissioners, and Chiefs
Why do we need 47 county governments, a duplication of the National Government, of Governor's wives, Concubines, Girlfriends, and Family Members? Not To Mention The Gross Stealing In Contracts and allocation of Funds..
Why do we have Over 700,000 civil servants, Elected and Nominated Kenyans, Less than %2 of Kenya’s 50 M population pocketing over %50 of every Fiscal year %100 Population Tax revenue?
They follow up with looting %35 of the remaining less %50 and %the remaining %98 of the population has to contend with %15 0f the Fiscal year revenue for Government services and other needs.
BBI? YESSSSSS, One man one vote one Shilling is the answer. Small government, more accountability, NO allowances for all these thieves for life after removal or retirement. Revoke all increments on their Salaries and allowances
SAVE KENYA

But BBI doesn't address the big government issues. It creates a monster president who appoints ministers without vetting. That's how we had ministers who were accused of murders in the past. Remember Dr Robert Ouko?