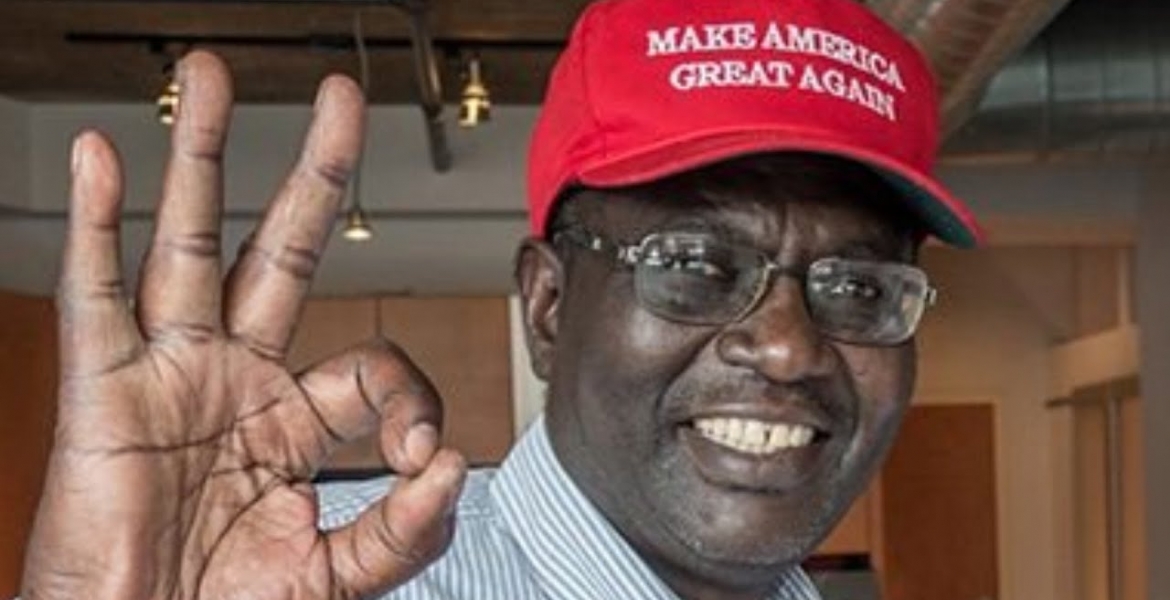 Malik Obama, the half-brother of former US President Barack Obama has given his take on the 2020 American presidential election.

In a series of tweets, Malik likened the US election to Kenya’s 2013 presidential election that was marred by irregularities, adding that “it’s like a movie.”

Malik, a strong supporter of President Trump, further termed the events surrounding the US election as “completely crazy.”

"Elections 2020 in the USA is like elections 2013 in Kenya. I've never seen anything like this in the USA. It's like a movie. Completely crazy. Rigged," he tweeted.

He further questioned the delayed tallying of votes and the announcement of results in some states.

"When was it that all the votes had to be counted even if it took a week...or more? Fake votes. They are waiting so that they call it for "Sleepy Joe"," Malik lamented.

Democratic Party candidate Joe Biden won the election after he crossed the 270-point threshold needed to become the 46th President of the United States.

In his victory speech, Biden said he is seeking to unite the country amid the Covid-19 pandemic and an economic and social turmoil.

“I sought this office to restore the soul of America, and to make America respected around the world again and to unite us here at home,” Biden said.

“We are not enemies. We are Americans.”

Incumbent President Trump, who has made repeated claims of electoral fraud, on Saturday accused Biden “rushing to falsely pose as the winner.”

Malik Obama, Barrack Obama's half brother, and Best Man at his wedding... he cannot understand why, or how, he was unable to 'eat' during his brother's Presidency. It is unafrican, and he still has a grudge. It is also unafrican for a sitting President to lose an election, unless it is rigged, or stolen. News for Malik. You were not entitled to anything because of your brother's Presidency. Accept it and live with it.

What an embarrassment: Ndugu Malik went against his brother the former president of the USA and supported Ndugu Donald expecting (probably) to be given a position in his administration. What a shame! He got nothing from Donald.

Dude ur brother is the famous Obama, u r just a nobody that is related to him n ur words only seem to be coming from a jealous idiot . Its Biden for President go fuck off.

You're a very disturbed individual craving for all the attention that you can get no matter how you'd would get it. So you chose to wear a silly red hat because you're tryin' to get back at Obama? I got news for you, he did not see it, you can only make it to ghetto news and not any higher. Since when did you hear Obama messing with 3rd world lower class news? He'd be stuck down there with you if that was the case. Listen dude, fight for your own! Be a man and stop mooching off of Obama's fame if you are not on his side. Telling the whole wide world you're out there fighting with him to gain attention is the most deranged and sickest thing you can do. Jeez without Obama you're just another bum on the street, always always remember that!

ThankHe more we talk about this self grandizing ingrate,the more we tend to give him publicity he does not deserve.Mwakilishi should not waste printspace on him,unless he does something newsworthy, like becoming miguna miguna's shamba boy.

You should also leave the US now that your role model has been defeated. Asiyefunzwa na mamaye, hufunzwa na ulimwengu. You are forgotten material.

The incumbent is a dying horse,a big looser in his own game.Down with Trump, down with his policies.

Trump has not been defeated. The election was stolen, the same way that they Steal Odinga elections in Kenya

Since Mwakilishians have experience in stealing Kenya elections, I suspect that their expertise came in hardy

@ Ex diasporan Trump lost, bigly. No amount of wishing will change that. He lost the Electoral college and the popular vote. 75 million Americans are thrilled. It would be even more thrilling if the New York's AG can help arrange for continued room and board at taxpayer expense.

Ha ha, Trump and Rudy Giuliani are saying that dead people were voting in Pennsylvania, long after polls had closed. If you count the LEGAL votes, Trump wins. This kind of argument we have heard it before with Raila Odinga. Tafakari hayo

Deadmen walking,deadmen getting apaycheck,and now dead men voting.. what the heck is going on