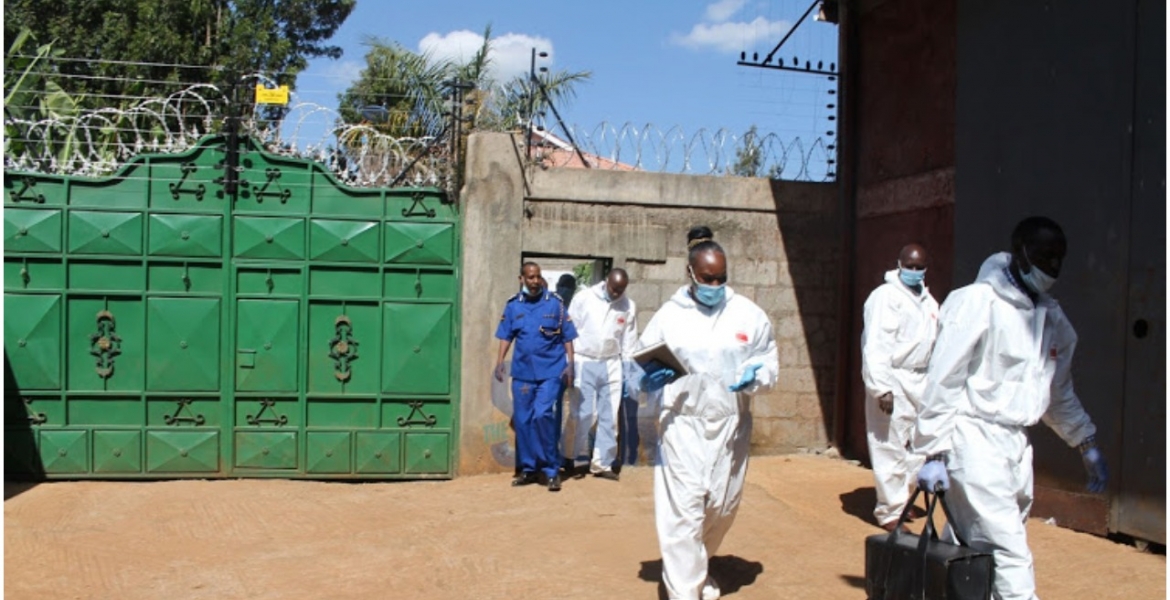 Detectives have opened a probe into a land deal linked to the murder of US-based nurse Nicholas Njoroge Warunge and his family.

The lifeless body of 55-year-old Njoroge was found lying within his compound on Wednesday morning while his wife, kids, and nephew were found murdered inside their house in Karura village, Kiambaa. The dismembered body of their casual laborer had been found in a neighboring compound the previous day.

The whereabouts of Njoroge’s eldest son Lawrence, a university student, is yet to be established but police are said to have tracked his phone signal to Naivasha before it went off.

The Standard reports that investigators are looking into a land deal that Njoroge was negotiating days before he was killed in cold blood. They are also set to revisit the murder of Njoroge’s brother, who was shot dead in 2018.

Addressing the media on Thursday, Kiambu County Police Commander Ali Nuno said this was the fifth such incident in the family.

It is believed that the killers arrived at Njoroge’s home aboard a white Nissan Sunny saloon car and two motorbikes and there is no indication of forced entry hence the conclusion that they were known to the deceased persons.

A blood trail shows that Njoroge may have tried to escape from the attackers, having jumped from his bedroom balcony and injuring his legs. “They caught up with him, overpowering him and dismembering his body at the gate,” a detective said.

Nuno said Njoroge was stabbed 34 times and his throat slit, but neighbors say they did not hear a cry for help from the family.

“We have not witnessed this kind of crime in the area for at least 10 years. It was not robbery because nothing appears to have been taken away,” Nuno said.

Njoroge arrived in the country on December 4th, 2020 to spend Christmas holidays with family.

The bodies of the deceased were taken to the Kenyatta University mortuary as investigations continue.

Buy Bitcoins and Tesla, instead of lethal land in Kenya.....

Not every body is an expert in trading equities! People should invest in land, real estate, etc without the fear of losing their life! This is quite ridiculous!

Amen. Bitcoin and Tesla it is.

These two are not the only investment vehicles that can help you achieve your financial independence. The fundamentals of TSLA and BITCOIN are highly overrated! Just look at the P/E ratio of TSLA at 1600 times higher to the expected price! Pretty soon these two will be going up in flames! Remember 2000/8? Simply diversify your investment in the stock market. There are a lot good equities you can buy.

This reflects on bad governance.
INSECURITY is bad,but when a whole family is murdered...come on now...but because NJOROGE is not someone who was well connected, we should see justice.

@ Kora Kanini, the perpetrators of this heinous crime dont fit to live in the human family.If they can do it once,they can do it twice or more...under same circumstances that prompted this massacre.
The flag should fly half mast for these innocent victims.Are we so desensitized by the frequency of killings that we do seem to just give a momentary notice and go on with our business?And leave the family,and police to fight it out?
If the whole community gets involved with a corrective purpose,the criminals will not hide anywhere.They live in the community.Unfortunately by community shielding them,they are acquiescing to this horrible act.I hope this"shieilding" is temporary till acourageous member of the community with information leading to the arrest of these animals steps up.

I think it's his GREEDY people that Killed him.

This reflects on bad governance.
INSECURITY is bad,but when a whole family is murdered...come on now...but because NJOROGE is not someone who was well connected, we should see justice.

This is beyond sad.Just goes to show the extent of greed some people who think they too will not leave this earth just as they came landless will go.Corruption is even at the land registry where these crooks are hoping to obtain faulty or amended titles once they eliminate all living relatives and witnesses.Surely Kenya needs to bring back death by electric chair now that firing squad was termed inhumane

Mwenda, I didn't say that you should only invest in those two, there are many investments with such characteristics. The problem with Kenya land transactions are the fraudulent nature of everyone involved, including GoK officials. Remember, a past president sold land 3 times in the past?

Mwenda, investors are hedging on disruptive technologies, that's why they are investing in Tesla at that P/E....

The other problem I have seen is that when the Nairobi real estate investor will die, he will leave his kids with a real estate in Kenya while the kids live in New York.... It is not very easy to manage such an asset from such a distance.