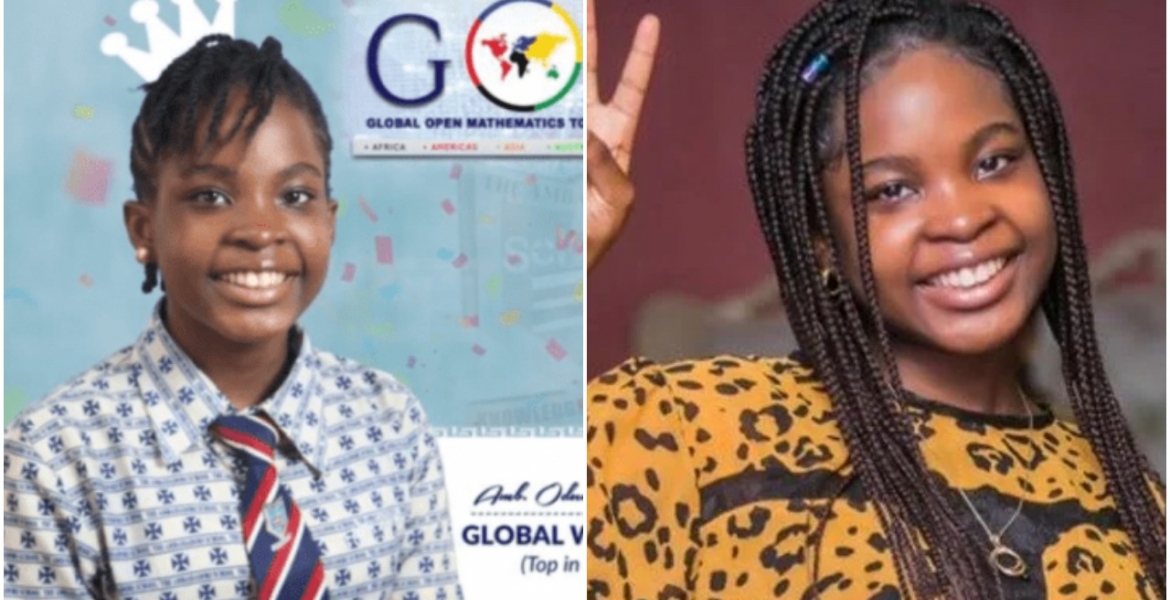 A 15-year-old Nigerian girl was named the winner of the just-concluded Global Open Mathematics Tournament.

Faith Odunsi from Ijebu in Ogun state beat several other participants from Europe, Africa, America, Asia, and Australia to emerge the winner of the global competition.

The winner of the competition walks away with a monetary prize of $1,000.

Speaking during an interview with The Punch, the SS3 student described the contest as tough, adding that she is proud to be crowned the winner. Faith says she passed through various stages of the competition before she was declared the winner.

“In the first stage, there was a computer-based test and we had to answer many questions in one hour. My score on the test was 66. The second stage took the same format and I also scored 66,” said Faith.

“The quarter and semi-finals were on Microsoft themes. We were asked questions and we put in our answers; the first to put in the correct answers got 10 points,” she added.

Faith says she spared time after school to prepare for the contest with the help of her teacher, who would coach her after class time. She also took some lone study time from 11 pm to midnight.

The final year high school student at the Ambassadors School set a record during the 2018’s Cowbellpedia by answering 19 questions in 60 seconds.

Faith’s dream is to become a computer engineer in the future. Her father is a doctor while her mother is a businesswoman.

Congratulations Odunsi!! From here on, Africans need to learn their history and culture in their languages. We also need to reclaim our names to connect with our ancestors and stop being the shadow of another.
Become a computer analyst, but be an African first.
We are not supposed to carry the burden of our masters names!!
What is Faith's first name? Odunsi,not Faith. The first name she was given when she was born by her parents. Africans, we need to pay attention.
"What is in a name, or shall we call you anything?"
Faith is not your name, it is your master's name.

This is good news for africans in the continent,and diaspora.Let's this not be an oddity.One thing that is obvious is that,apart from her natural gift in being bright/smart,she works hard,and appears disciplined,and garners great support from parents and teachers.
If one wants to look for recipe for success, look no further than here. Congratulations Faith Odunsi.You are an inspirational to all humanity.

@Mwororo I believe we as Africans have more urgent and enormous problems than names. I don't really care for names as long as one has character, substance, and humanity. Mobutu Sene Seko banned all Western names in Zaire but still fed his county to the dogs. Uhuru and Jomo Kenyatta have unleashed unspeakable harm on Kenyans even with their African names. Gen. Dani Abacha of Nigeria was a real nightmare. I could go on.
We have to accept that the entire world has progressed from tiny tribal subsistent communities. We need to deal with the here and now, get with the program, or get left behind in the dust. Kudos to Faith on her prowess!

Good job Faith. I don’t have any problem with your name. Keep it up.

How did it happen? some magic

The answer is found in JUJUmatics