Woman Carries Placard in Streets of Nairobi in Search of Husband 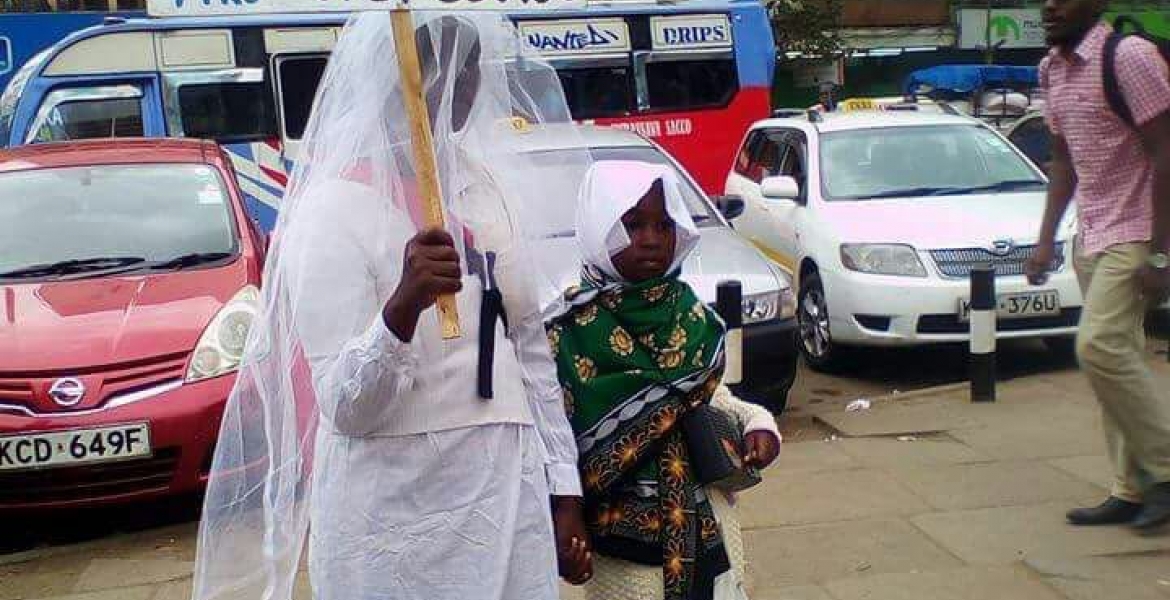 Nairobi residents were on Tuesday to a rare dramatic incident after a middle-aged woman paraded herself along busy city streets carrying a printed placard announcing she was looking for a husband.

The 28-year-old mother of one was seen walking along with her 7-year-old daughter wearing a wedding gown along busy Tom Mboya street.

On the placard, she identified herself as Nyambura and christened her mobile number on the placard for those interested to contact her.

Kenyans as usual took photos of the rare spectacle and took to social media pages to share her 'plight'. While a section made fun of the lady's predicament, others sympathized and empathized with her and called on potential husbands to make 'bids'.

Some other Kenyans politicized the matter with one user reminding Kenyans that Opposition leader Raila Odinga had such single mothers in mind as captured in his campaigns.

The National Super Alliance (NASA) presidential candidate had promised to have a special fund for all single mothers if elected president in the just concluded elections.

"When I say Railla is baba some of you think am mad. Raila had seen this and single mothers dint vote for him. Sasa this one should go to the delivery portal pick a husband there. My luhya brothers i know apart from chicken appetitie, you also have so much appetite for women. Please dont be tempted. My morning made,, this what I bumped into this morning.. Mabwana mupo??? Kedego Kigwiru said.

Mwenja Kiha Joseph, "For those women who cheat or complain that their faithful husbands are not good enough for them, remember that there are some fellow women who are looking for husbands. For instance, Nyambura (shown above). Don't let your pride lose your husband to another woman who is searching,".

Wayne Amos noted, "And why is her number bussy since morning... Wanaume nakuokolea,najua hivi sasa anahama...,".

Willie Njoroge slammed her for exposing her innocent daughter, "Whatever the case exposing the little angel to the marauders of men in the street really pains me. She has her freedom of association but has the responsibility of protecting the child's life and dignity. The kid ain't looking for a husband. Is she?,".

Shuah Muhonja said: "Really? God's time is the best,this Lady took it far she could kneel down and ask God for a good husband, i saw this coming Githeri copy cat seeking attention we have many single mums who are toiling out there and praying for better husband,does it show she's that desperate if she's just normal she must look descent not like that,".

She is not middle age. 28 years old hawa ma-journalist wa kenya did not pass Matiang'i exam walipita ile ya cheating

What is the big hurry she is only 28.What will a marriage bring her that she does not already have.What happened to the father of her kid was he not ready to marry her or was she just having fun or was tricked by the dude?Women stop this mentality that you are "less" than because you are not married.Most women are ready for the ceremony but not the actual marriage.Get off the Streets and think about your daughter .It is her future that you should be toiling for as your goose is already cooked.Be ready to be a side chick or a second wife if you are that desparate to get married.

Is this fake new,or some kind of social experiment...I wonder why she is skipping the dating part,straight into marriage.Doesn't she have relatives,and friends who can hook her up with somebody? I guess long gone are the days when women of marring age sat home and waited for papa to bring home a suitor.I wonder why fathers absconded this duty...
Apart from a child,what else is she bringing to the table.Ithink if she has agood resume,she could get some hits...

Could be a man look at his hands they big for a woman.The name is fake too. Unfortunately, nowadays kikuyu names or mungiki are being used as a scapegoat.

There are women out there who could pass as men for sure. Our 800 meter runner Wamboi is one.And I am sure there are some men who could pass as women as well.
Interestingly, if a man(average joe) did what she is doing,hardly any woman would come forward.But if he showed a fat balance(sh.90,000,000) in his bank account, there would be a line of about a mile long... He would have hard time picking one.

Ngai fafa, now she makes men believe that marriage is a favour to women... ati they are God's gift to women. If only she knew what freedom she'll be giving up...and for her daughter, please spare her your split love and that of a man who will never accept her. Marriage is not a bed of roses -- but then, if that is what she really wants, and that is what makes her happy, regardless of her daughter's wants and happiness....who am I to tell her? Go gal!