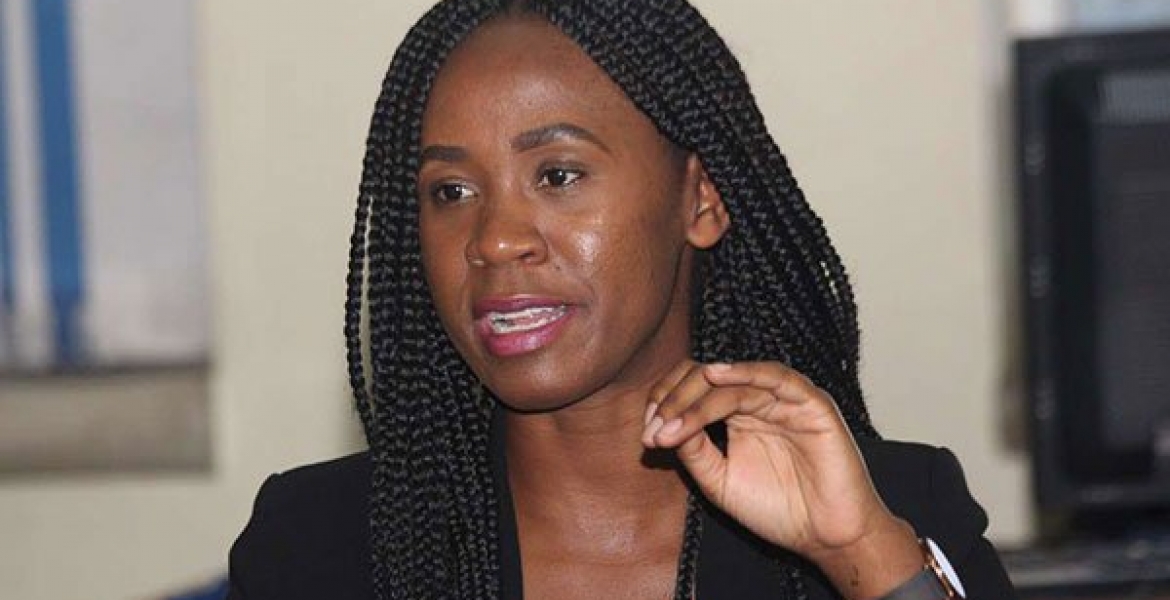 A Kenyan woman has narrated how she was racially profiled at an airport in Bangkok during her journey to Cambodia last week.

On October 7th, Renee Ezra made a decision to visit Cambodia due to its famous low-budget tourism destinations, history, and pristine coral beaches, Sunday Nation reports.

She purchased a return flight ticket to the Cambodian capital, Phnom Penh via Istanbul (Turkey) and Bangkok (Thailand) on TurkishAirlines.com. She was to spend the next week in Cambodia.

She left Jomo Kenyatta International Airport (JKIA) at 4.20 am on Tuesday, October 8th, aboard a Turkish Airlines flight and after seven hours, she arrived in Istanbul, where she would connect to Bangkok.

Ms. Ezra says she connected to Bangkok without any problems until she sought to board her final 75-minute flight to the Phnom Penh International Airport.
It was early Wednesday morning in Thailand when she got in trouble with an agent for Bangkok Airways.

“At first she [the agent] said they couldn’t find the flight that I was booked,” Ms. Ezra, who is the owner of tour company The African Wanderlusts, told Sunday Nation.

“She asked for the visa to Cambodia, and I told her it was to be issued on arrival. She checked and confirmed that bit.”

She said the agent later called her supervisor from the back office and after a short conversation, the two demanded she shows them $2,000 for her to be cleared to board the flight.

“I did not know that to be a requirement for entry into Cambodia and so I did not have the money in cash. When I told them as much they said they wouldn’t let me on to the onward flight unless I showed them my $2,000 or at least $1,700.”

“But they said they wanted to see US dollars. I logged on to my online banking apps and showed them to prove that I had enough money to be a tourist. They would have none of it. So I was forced to go to an ATM, where I could only withdraw $500 due to transaction limits.”

She continued: “With that, I asked one of the stewardesses to accompany me to the closest forex bureau to change the Kenyan money. But the bureau said they did not accept Kenyan currency.”

Her efforts to get help from the Kenyan Embassy in Thailand were unsuccessful.

“The lady at the Embassy who answered my distress call said, ‘It’s not in our place to assist in such matters,’ but I didn’t give up. I called the Cambodian immigration, who confirmed that there was no requirement for Kenyans to show $2,000,” said Ezra.

“The official on the phone said they didn’t need cash — the bank statements would do. Furthermore, I had all return tickets and a full itinerary showing it was just a week of holiday.”

The officials would not allow her to travel even with the confirmation from the Cambodian immigration.

“Moments later, the Turkish Airlines counters opened and a discussion started between the two airlines,” she recalled.

“What hurt most was the fact that there were so many people being checked in without having to show cash. A black man was also facing the same predicament. We were being profiled!” she claimed.

Ms. Ezra said she was put on a flight back to Nairobi on Thursday like a criminal.

“I was escorted by their staff at the airports like I was a criminal. I was traumatized,” she said, adding that the hostesses in the flight refused to serve her.

Upon landing at JKIA on Friday morning, she was given back her passport and an envelope with a note stating that she had been denied entry into Bangkok by immigration.

“It is ridiculous because I was in transit. I never passed through immigration, nor did I meet anyone from immigration."

Ms. Ezra indicated she has taken up the matter with the Kenyan authorities. “I hope this opens up conversations about matters that we as black people, especially from the Third World countries, face during international travel,” she said.

Taking to Twitter, Ms. Ezra tagged the two airlines, lamenting:  “Why on earth would you treat your passengers like this? As a human being, I am deeply hurt, saddened and disappointed by your actions. Do better as service providers and prove us wrong that this isn’t a mere case of racial discrimination! I have had a 12-hour forced layover, with no food and water. I’m infuriated!”

MEANWHILE,LESS THAN 20 MINUTES AGO...
A KENYAN WOMAN SHATTERED A WORLD RECORD NOBODY THOUGHT COULD BE BROKEN IN THE BANK OF AMERICA CHICAGO MARATHON.
WOW.....!!!!!!

Thank you ! Mwakilishi attraction to non issue articles is worrying ! Talk about priorities, if you are black and in 2019 you think the world loves you and embraces you( black folks need to stop the nonsense that the world is fair, even with Kipchoge 1.59, it isn't) , you are naive. I know how to travel while I'm black = no expectation except when I travel to .KE and Sub Saharan Africa, therein lies , usiniletee ubaguzi , I have nails and rights!

THESE FOOLS SHOULD REALIZE MANY KENYANS/AFRICANS ARE RICHER THAN THEY ARE. SOME OF THESE ASIAN COUNTRIES ARE THE TRUE SHITHOLE COUNTRIES BUT DUE TO OUR STUPID CORRUPT LEADERS NO ONE RESPECTS AFRICANS. SORRY ABOUT THE ORDEAL LADY, FOOLS WILL ALWAYS BE JUST THAT, FOOLS.

Ezra's, welcome to the real "black man's" world. This did not just start, it has been the order of the day for 400 years. It is information age, so everything is coming to light.
Our leaders need to know the times and act accordingly. Our leaders will have to put the "black man" both in the continent and in the Diaspora first in Africa. We must also put our people and each other first. The hatred towards the "black man" is universal by all other nations.
For the black man loving and respecting each other must be universal.
Ezra, your money,education or status in Kenya has no say in this, only your soul and the color of your skin. Kenyans and Africans will have to change their attitude towards superiority attributed to the color of the skin-know where that superiority comes from- their blessing, the sword (gun).
Listen to "Hebrew Israelites" in America who have experienced the same and more for 400 years and learn!!

And the rest of us face this in our "daily bread pursuit" even in executive offices in these United States. I know what you mean when you say if our leaders acted right, our "VALUE" would be revered world wide

Ezra thanks for sharing , i will never step foot in those airlines . They had plan to steal your cash

With all there is to see and do in Kenya, why go give your money to people who look down upon you. If you are done with Kenya, Africa South of the Sahara awaits. Kenya is stunning and amazing, I doubt anything in Cambodia compares.

Pole dada..no words can lessen your pain and embarrassment. For what it's worth, most of us go through this humiliation every waking minute albeit not in such a magnitude. The number of times I am shadowed by some security guy in a shop/supermarket.... then the look of distain when I enter a "posh" café/restaurant....boy! We may have moved on in accepting multiculturalism, likini most countries and individuals have not. Take heart and rejoice in your ability to be able such luxuries. Give yourself a big tight HUG and KNOW it's their beef NOT yours!

We have open heart to the people of this world for centuries. We are still the last people the rest of the world cares about.
Your intentions were a tourist with clear thoughts. Your origin isn’t. Turkish airline didn’t do you justice either.
My thought spent your time in Kenya tourist destinations, you have safaris beautiful beaches along Indian Ocean.
Promote your own.

Yet another victim of Africa’s and Africans’ stupidity. We play ball so low nobody will ever respect us. The average African leader, especially our very own in Kenya, is an idiot who has no clue about value addition, branding and what it takes to EARN respect.
We shall forever remain on the pavement until the day we learn to respect ourselves before we ask the world of the same

It's not easy being black!

They are very stupid people with a very low understanding, i dont know what they thought you going to do in their country, terrorist or something. I would not even go there and deal with kind of their foolishness.

If our government cannot ask for reciprocity, then maybe we, wananchi, should. Nigeria's reaction to xenophobia....speaking the language of the goons...

I am more disappointed by the Kenyan Embassy reaction! How dare they? Part of the Embassy's responsibility is to protect their own no matter what! SHAME ON YOU! Nkt!

I have more stamps in my Kenyan passport than I do in my US passport. What I have found from my many travels is that people treat you how you treat them.

Godrey A, I take it you are saying it was her fault she was mistreated and booted back home? Please tell us what she could have done better. Perhaps kiss their booty? Having stamps in your passport does not prove you have not been victimised, you may just have been lucky not to encounter these power mad racists. I have travelled too, but I too have seen how these power crazed wish haves can act. Don't go there please - blaming the victim! Wacha bro...

but on a serious note, why travel to campuchea..you should have gone to bypass or mlolongo..less stress

Phnom phnem?! Even the name itself tells you these are not conducive destinations, who calls anything Phnom phnem ? Maybe mongooses (mongeese?) When they dig holes to hide in.

I think government need to check if she is prepared for it or not.

I think government need to check if she is prepared for it or not.