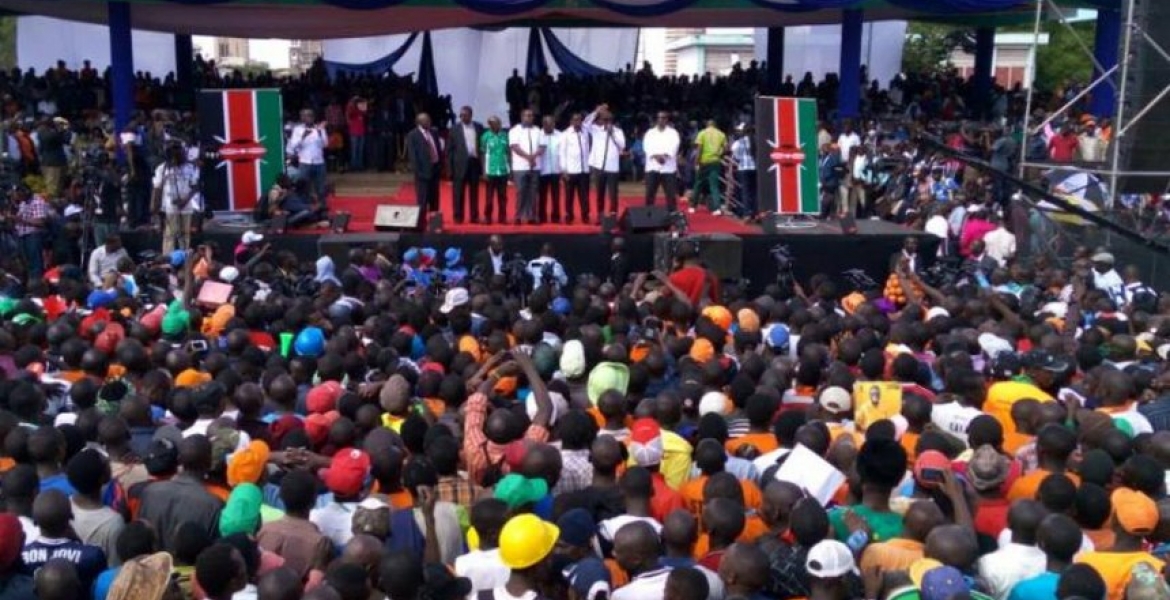 The two were unveiled at an elaborate event held at Uhuru Park on Thursday.

The duo, just like in 2013, will face off President Uhuru Kenyatta and Kalonzo Musyoka in the August 8th general elections.

NASA unveiled at the event a new government structure that will see sthree top posts created to accommodate the five principals in the event the coalition wins the August 8th general elections. The positions to be created are Premier Cabinet Secretary, and two Deputy Cabinet Secretaries.

In the new arrangement Raila Odinga (ODM will be the President, with Kalonzo Musyoka (Wiper) serving as the Deputy President. Musalia Mudavadi (ANC) will hold the powerful Premier Cabinet Secretary position, while one of the Deputy Premier Cabinet Secretary postions will go to Deputy Moses Wetang’ula (For Kenya) and the other one to Issac Ruto of CCM.

The Premier Cabinet Secretary will be in charge of day to day running of the government – a post similar in power to that of a Prime Minister, says the agreement.

The principals say the new structure does not violate the constitution, and no referendum will be needed to approve the formation of the new positions. They also say the President will consult and get approval of all principals before making any decisions on the running of the government.

The leaders have been under intense pressure to name a flag bearer from their respective bases, with each base calling for their own to be named the flag bearer. They now say they are fully united to kick the Jubilee government of President Uhuru Kenyatta and Deputy President William Ruto come August 8th.

Kalonzo Musyoka is now officially a second fiddle to Raila Odinga. This highly flip-flopper politician who have been running around the country claiming he will never be a second fiddle to anybody is now that second fiddle. The luyha community have been sidelined by a trivial tribe which does not have the numbers to bring to the table. This is the beginning of the end this coalition parties as we know them. Raila is Kenya's lord of poverty and Kalonzo is one of the biggest land grabber the country has ever known.

The way they conned and used Mudavadi, is truly despicable.No wonder they don't respect him.Anyway.Luhya's are welcome in Jubilee.Luhya's should vote for Jubilee so that we can form the next Goverment.

I remember the Atwoli's mission to unite the Luhya behind Musalia when he was promised the presidency by Rao. Hii ndio inaitwa kutumiwa vibaya.