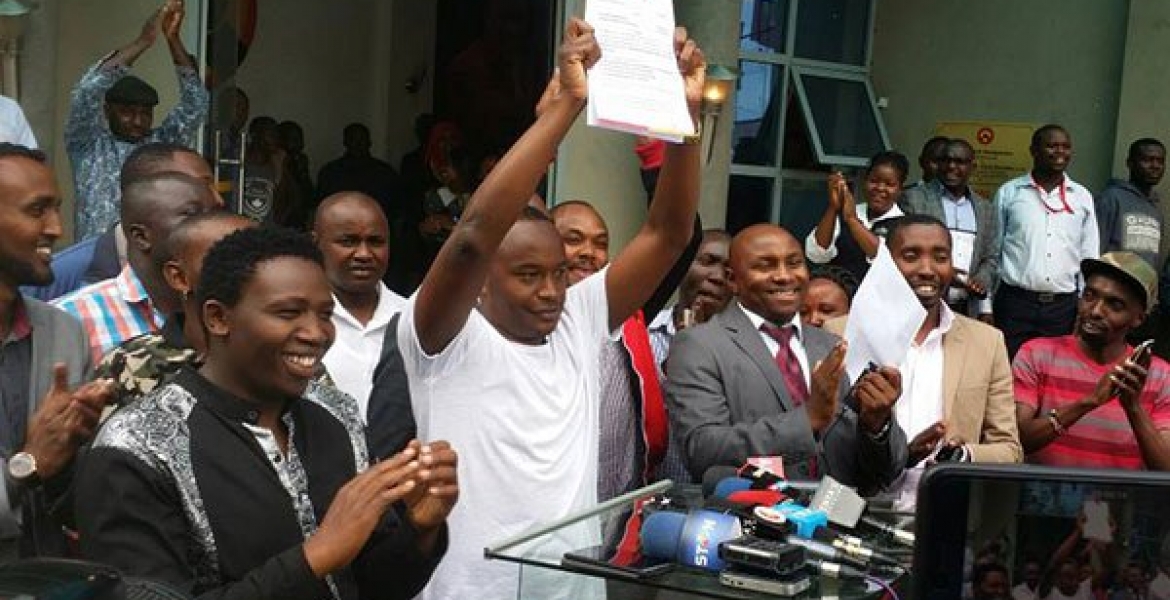 Musician Charles Njagua Kanyi was on Wednesday handed the Jubilee Party nomination certificate for the Starehe parliamentary seat after the Jubilee Party Appeals Tribunal ruled he was the duly elected aspirant of the primary election.

Faith Waigwa, the Tribunal’s chairperson, said there was compelling evidence that the final election results were altered in favor of f incumbent MP Maina Kamanda.

"Based on the evidence adduced before us by the complainant, which the respondent could not substantially rebut, the Tribunal finds that the complainant's evidence on the alteration of his results garnered at the tallying centre is so compelling that it is clear that he had won in the nominations,” said Ms Waigwa in the ruling.

The musician, popularly known as Jaguar, had protested at the Jubilee Headquarters the outcome of the primary election held last week that saw the returning officer declare Kamanda the winner of the seat with 10,374 votes against Jaguar’s 8,391.

The final figures did however not tally with the votes tallied for each polling station that projected Jaguar winning the seat. Jaguar and his supporters immediately protested the outcome, claiming Kamanda had stolen the nomination from Jaguar. He refused to negotiate with Kamanda on the way forward, saying the only option was for Kamanda to admit he lost and step aside.

"We don't want negotiations ...I will not sit down with anyone and will not go back to the elections," he said. "I am not ready to talk to him (Kamanda). Democracy is not about negotiation," Jaguar said at the time

After the ruling on Wednesday, a jovial Jaguar thanked Jubilee for the fair hearing and said he will work tirelessly to serve the people of Starehe if he is elected to parliament in August. He added that he had no personal differences with Kamanda, noting however that Kamanda erred in trying to take away the win from him, saying “alifanya vibaya kuchukua chakula cha mtoto.”

Entertainers do NOT make Good and Feasible Leaders. They make Good Intetainers.