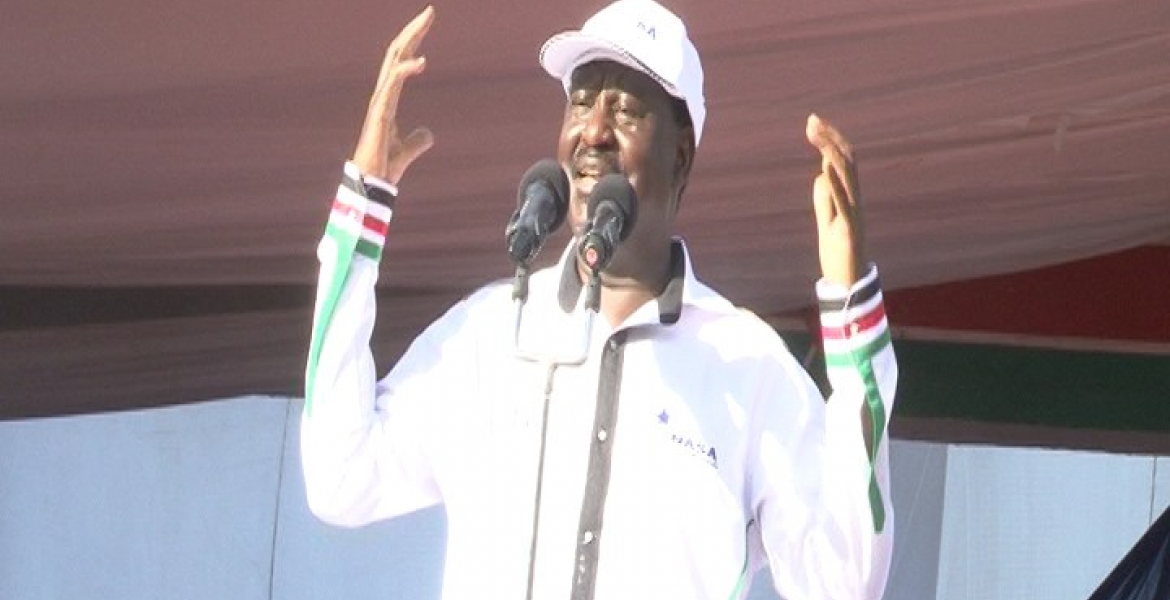 NASA Presidential candidate Raila Odinga now says that some powerful personalities in the Jubilee government are planning to grab the new Kenya Co-operative Creameries (KCC) assets, among them a prime piece of land.

“They have ripped off the National Treasury...Now they are targeting KCC after fleecing dairy farmers by buying their produce at a throwaway price,” he said.

“They are not interested in what the citizens receive,” he said.

He lashed out at President Uhuru for failing to compensate majority of IDPs across the country and only concentrated on one community.

“They had promised to settle the payments before the General Election, but 60 days to the polls, they were still dragging their feet,” Raila said. “My government will end your suffering if you elect me and NASA team to power,” he added.

This guy is always lying to people.His problem is that Kenyans know him.Kenyans don't forget all the suffering (the death and chaos) he has caused to thousands of Kenyan Families over the cause of his Political Career.Kenya cannot afford to have NASA Hyena's in power.Stick with UhuRuto, for Peace and Development in the country.

@KIM, please name one politician in Kenya who is not a "liar".

Let's not just say "this guy is always lying " without saying exactly what he's lying about. It simply means you also lying about his lies. At this point Odinga's lies does not make the government any better. If anything, we should be concerned about having no credible candidate to lead Kenyans going forward. If,as Kenyans,we still are in the business of trying to score a political point without any admission that our country is headed in the wrong direction, then I'm afraid that we don't have any patriots left. I don't necessarily think that Raila will solve all our problems but anyone is better than the current president and that's without prejudice. If all you see and can talk about is how unfit Raila is then I am sure you lost a point at some point. Kenya is in bad hands right now not because I know who's better but that's a fact. If you think that the government doesn't have nothing to do with the suffering currently being experienced by ordinary wananchi, then either you don't understand the role of government or you simply have unwavering support for the president and his deputy which is quite fine but don't make those that don't see things from the same eye as you look as they are out of point.

raila "will end the suffering of IDPs?" Lord have mercy.Why in the name of God would the person who caused IDP/benefited from the deaths of Kenyans be so empty- headed to think he has a solution? How demonic that this person has no mercy/remorse for his part- in whatever form that scarred the country? As a victim whose family paid so dearly for greed of this moron i wish he would be human enough never to utter anything regarding IDPs. By his actions our village was razed to the ground and all- 100% population displaced.People left to be IDPS - children lost school time/parents/grandparents and more.People who had means became beggars. Kindly fear God and leave IDP issue to God to heal his people.

Name them before they grab it. What good does it do wananchi to wait until KCC collapses only for Raila to be saying " I told you wananchi, I warned you.."
Hii ni propaganda. Our opposition leader is gossiping like a housemaid. Name them so that we don't vote for them.

Raila has no agenda only propaganda why didn't he talk about it before it was revived and farmers started taking the farm produce.its a high tym raila and his fellow old men should go home relaxe and see how young men work and progress in service delivery to the 45million kenyans.kusema na kutenda not hadithi na kulalamika.

How many IDPs did he help settle when he was Prime Minister for 5 years?

Tell us your strategy of making those ends meet. Refrain from bickering just for the sake of it. Actions please. Stop throwing stones aimlessly.

KCC is not Kisumu Molasses plant. Neither is it Kazi kwa vijana. Raila should give more details or shut up instead of drumming rumours.