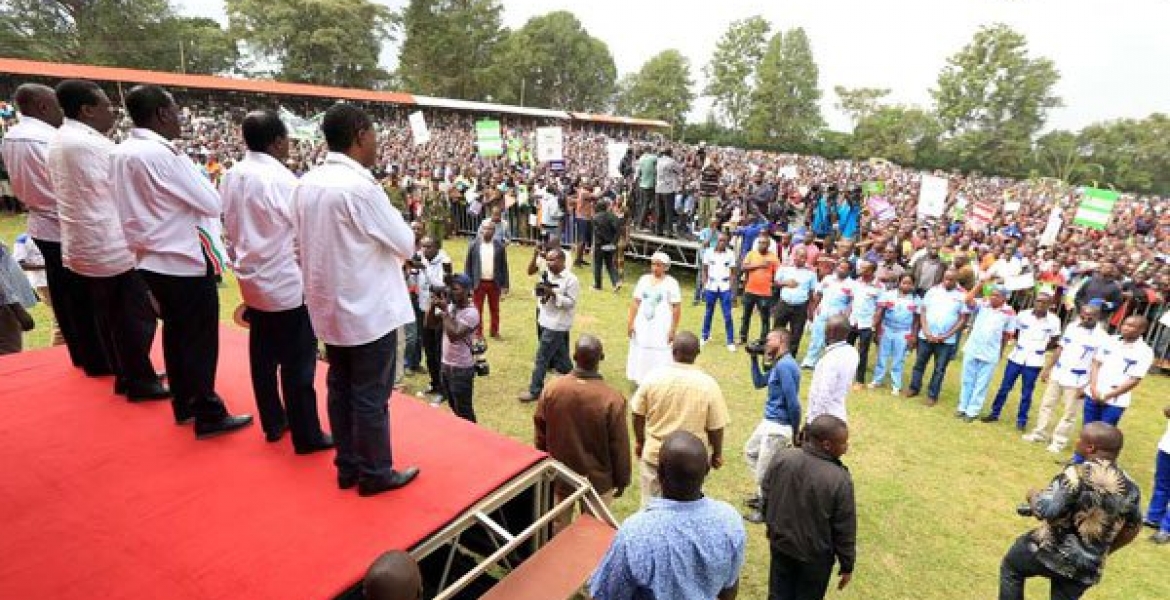 A NASA rally at Kapsabet grounds, Nandi County on Sunday was interrupted for hours after rowdy youth stormed the meeting.

Police were forced to intervene to repulse the youths who were dressed in Jubilee regalia, chanting anti-Raila slogans.

NASA principals led by Raila Odinga and Kalonzo Musyoka claimed that the group of youths had been paid by Jubilee to disrupt their rally, adding that the journey to rescue the nation was unstoppable.

The rally however resumed after police restored normalcy, with Nasa leaders hitting out at the Jubilee administration for failing to address the challenges facing farmers in the country.

“Since Jubilee took over, farmers have become poorer. The prices of raw milk have gone too low while tea farmers now get only Sh10 per Kilo as a bonus, this is a big failure of the government," Raila said.

He added, "We decided to start our rallies here because we know the significance of this town, this is the headquarters of the Kalenjin community."

Kalonzo promised that the opposition was assured of big support in the Rift Valley, despite the region being Deputy President William Ruto's backyard.

"...The youth who were dressed in Jubilee regalia chanting anti-Raila slogans.."

Of course you know who sent the youth to disrupt the NASA meeting. They were sent by the two former ICC candidates who hired foreign lawyers in order to be set free.
I would like to warn Uhuru and Ruto to remember what happened in 2007. For goodness sake, please don't prepare the youth for another holocaust!

If there is another disruption by your hired sycophants against the NASA public rallies, both of you should be arrested and taken to court until the election is over,

Likewise, i would like to warn Raila and his NASA candidates, if you sent your sycophants to disrupt the Jubilee Alliance public rallies, you should be arrested and taken to court until the election is over.

It is time that all the mature Kenyans take a strong stand against violence perpetuated by our greedy, corrupt, and selfish potential leaders of our republic.

As a matter of fact, Boinett should have summoned Uhuru and Raila and warned them that in future rallies, if they send their rowdy sycophants again to NASA political rallies, all their public rallies will be cancelled for good.
Kenya is not made up of only two people: Raila and Uhuru!

Msema Kweli, it's my hope that one of these days, we as Kenyans will stop seeking scapegoats and hold the crooks responsible for their actions. With all those cameras, those disrupting political rallies should face full force of the law. No Excuse.

You are right, "...With all those cameras, those disrupting political rallies should face full force of the law. No Excuse." I totally agree with you Ndugu IMKGOOGO.

It is time that all responsible and mature people should speak up. We should ask the images taken on this day be turned to the police and Uhuru and Ruto asked to identify those who disrupted the NASA meeting in Kapsabet. By turning the youth to the police, it will set a good example that we demand political maturity in all political rallies.

I am asking Mr. Bonnett to view these recording at this rally and arrest the youth immediately. This is exactly what happened in 2007. Guess what, Uhuru and Ruto have not so far arrested, prosecuted, or jailed anyone associated with the 2007 holocaust.

NASA leaders should also be held responsible in future if they send their youth to disrupt any of the Jubilee Alliance political rallies. It is time that our leaders mature and set a good example for the youth of Kenya.