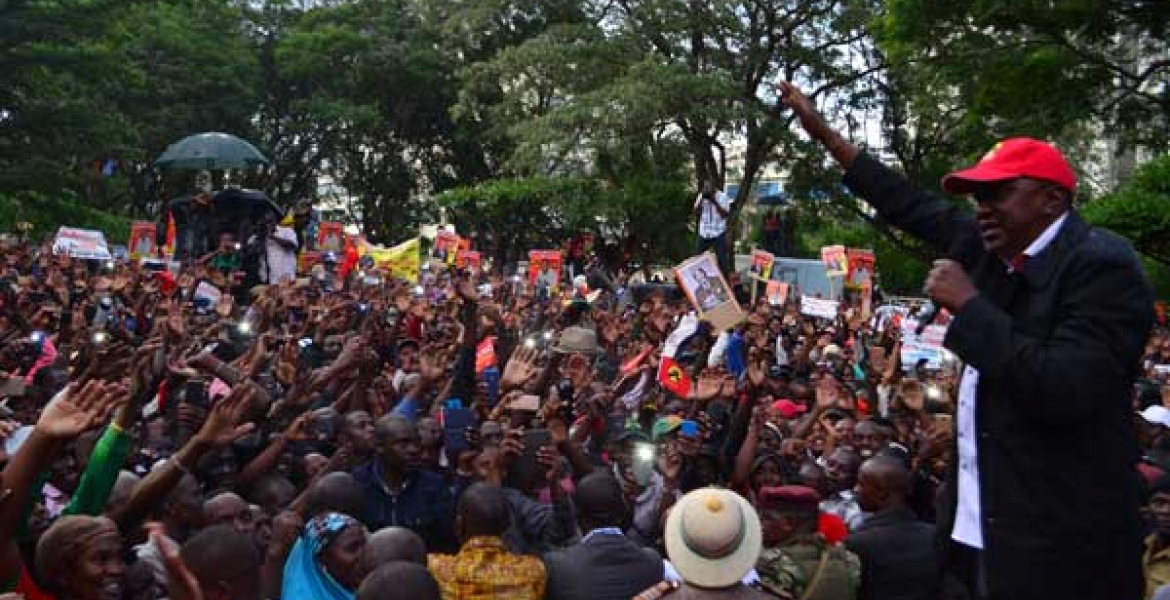 About 7,000 people in Kisii displaced during the 2007/2008 post-election violence can now put a smile on their faces after the government released money for their compensation. The names of the 7,000 people set for compensation was compiled after a special team set up to work with the Office of the President and after vetting a list was forwarded to the National Coordination Consultative Committee on IDPs (NCCC) by the IDPs Network Patron Evans Misati.

In his tour to Kisii County on Tuesday, President Uhuru Kenyatta issued a Cheque worth Sh358 million at Masimba Secondary School playground and promised another Sh460 million to be issued to Nyamira County IDPs on Wednesday.

"This has been a thorny issue among the Gusii community. We promised to deal with the issue and never again should Kenya face such a mess," said Uhuru.

He added: “We do not wish to go back to the kind of violence experienced in Kenya during the 2007 General Election,” the President said.

The IDPs have been demanding Sh200,000 each to buy land just like their counterparts in Central and Rift Valley regions.

Where was Uhuru for the past four years? How come he is doing now what he should have done as soon as he took the "false" oath of office in 2013? IEBC, Please disqualify Uhuru if you have to have any legitimacy as an independent body.

This is another case of bribery carried on by a corrupt head of state! Disgusted! I should have run for the presidency of Kenya in order to rescue our nation from moral this open and moral decay!

If it was KIKUYU "Idps" getting the money, nobody would be complaining. TRIBALISM and TRIBALIZING is Cancer in Kenya to say the Truth.

Msema kweli hehehe if its bribery please they have every right to refuse the money n remain being an idp.This pple from nyanza hawatakimaendeleo kabisa.Uhuruto is not forcing anybody to vote for him coz the numbers r there n interact so he is just adding here n there ndio the lord of poverty aachwe na 3milliom difference.Yes the idps could have bin paid long time ago but mayb the cash wasn't available or they were confirming the true idps.We have a working president not a propagandas empty politicians called naswa(No agenda stupid alliance)ru saying even the nubians n makondes hawangepewa their rights as Kenyans.Ur an idp in the USA bratha even if u denie it????

It's mild boggling that Uhuru is now dishing out title deeds, money etc the last minutes of campaign season! Where has he been? it's a form of campaign bribery!

Waswahili husema, " Mtoto wa nyoka ni nyoka." Uhuru is doing exactly what his father did while in power - corruption and bribery. Let us stop the idea of electing sons and daughters of parents who were once in power. That means Raila and Musalia should not be looking forward to being elected in order that they continue perpetuating their father's legacy.