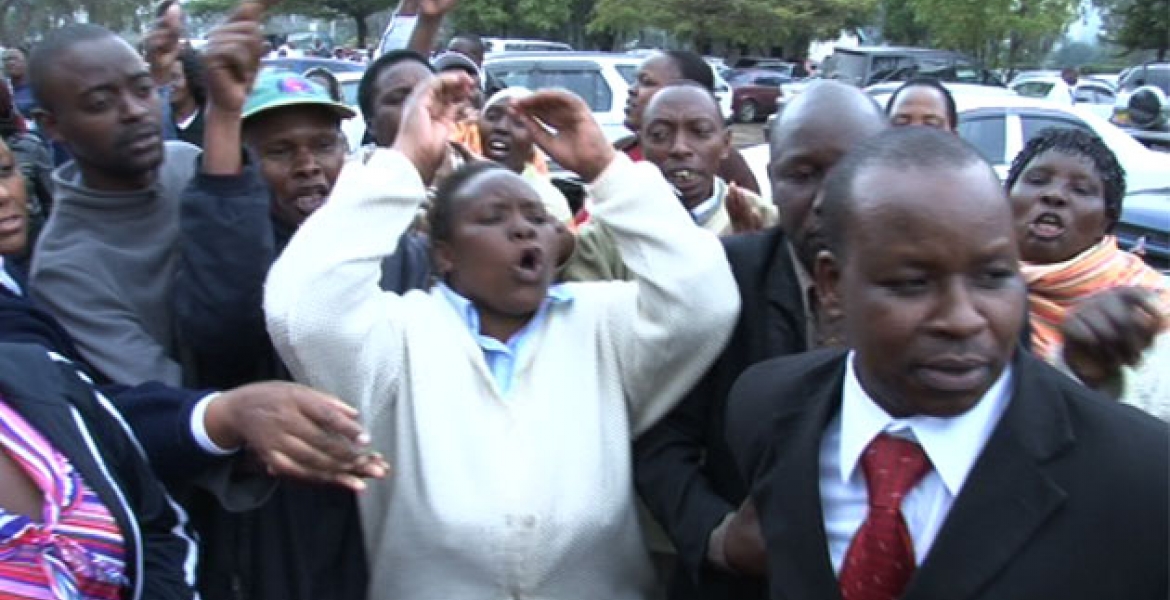 Six patients have been confirmed dead at the Coast General Hospital as the nationwide nurses strike entered its second day on Tuesday. Mombasa Health Chief Officer Khadija Shikely, confirming the fatalities, revealed that three patients died at the emergency section while the rest passed away in the hospital wards.

Shikely said that the hospital was assessing the situation although media reports indicate that the facility was already discharging patients in a number of wards.

This comes even as confusion took center stage among Kenya National Union of Nurses (KNUN) members with union officials differing on the validity of the strike.

According to Embattled union chairperson John Bii the strike was not legally protected, but the acting KNUN Chairperson Joseph Ngwasi dismissed Bii’s claims, adding that he had no authority to speak on behalf of the Union.

“The chairperson of the union if Joseph Ngwasi who is on an acting capacity until that decision is ratified by the National Governing Council of the Union,” he said.

“John Bii was the Chairperson of KNUN therefore he cannot purport to be speaking on behalf of the nurses because he is not in touch with the nurses themselves.”

The nurses are demanding the implementation of the 2017-2021 Collective Bargaining Agreement (CBA) which the Council of Governors’ Chairperson Josphat Nanok has dismissed saying that it would cost Sh40.3 billion to implement it.

But Ngwasi dismissed the governors’ claims adding that the Nurses will not relent in the fight for their rights.  “The CoG is misleading Kenyans on the total amount required to finance the CBA. The nurses CBA requires Sh7.5 billion annually that makes it a total of about 30 billion to finance the CBA for the four years,” he stated.

The strike that started on Monday has seen operations in all public health centers paralyzed, just months after a three-month strike by doctors ended.

I think we should invite the British to come back and colonize us for the next 100yrs until tupate adabu and learn to live like grownup human beings ... not the animals we are. They should make us their slaves and subject us to hard labour for 100 yrs .. yes ..all of us jumbirii and rasa people .. maybe all this nonsense can come to an end

Why the British, lets try someone else.Like the Arabs.They seem to have a liking for Kenya workers...and apparently were good slave riders.

Anyway, the power is with the voters. Mass protests for corruption,and obscene benefits to the Mpigs all can end in a week if there is mass protest against them.I also wonder why the ballot does not work.Are we so gullible ? Why do we keep on voting for crooks.
Nurses carried their weight when doctors where on strike. Now lets see what the docs will do. Iam afraid they may come back for more pay.Nurses are the right hands of doctors.Not many can perform without them-synergy at best.So my suggestion is that when docs ask for bigger pie, they should include the nurses too.

@HYPOCRITE: Ndugu yangu. The people of Kenya are not stupid as our immoral and corrupt leaders would like us believe. In about two months, the parliament will be suspended because of the elections and our corrupt parliamentarians have made sure that they will continue to be paid until next year without working!

The nurses are not dumb! They know how much our members of parliament make per month including all the allowances that they get in addition to getting mileage allowances when they go to visit their concubines all over the country.

We thought that by electing youth leaders, Kenyans will have solved its national problems! Boy! Were we mistaken. Insecurity is everywhere, rampant corruption is now the norm. Even insatiable looters like Waiguru want to run for the position of a governor in Kirinyaga!

@ HYPOCRITE, the solution is simple. Arrest the few corrupt leaders that we have, take all their possessions and Kenya will stand tall again.

So my suggestion stands ... lets invite the British or Arabs .. have them colonize us for 100 yrs and subject us to hard labour mpaka tupate adabu ... Africans may be very smart but when it comes to politics and governance, we need help and the sooner we ask for help, the better.

The roots of all Kenya's evil is in CORRUPTION perpetuated by the politicians and enabled by the government. MPIGS are rewarding themselves quarterly with more salary and bonuses while common wanainchi can't make ends meet despite hard work.

Deeply saddened that innocent patients got up in this mess has to endure so much pain, agony and uncalled for death! RIP.

How many of the patients at Mombasa County would still be alive on August 8 for Joho to ferry them in ambulances to go and vote for him and NASA? Shouldn't he be paying the nurses to work so the patients be alive and healthy to vote for him?