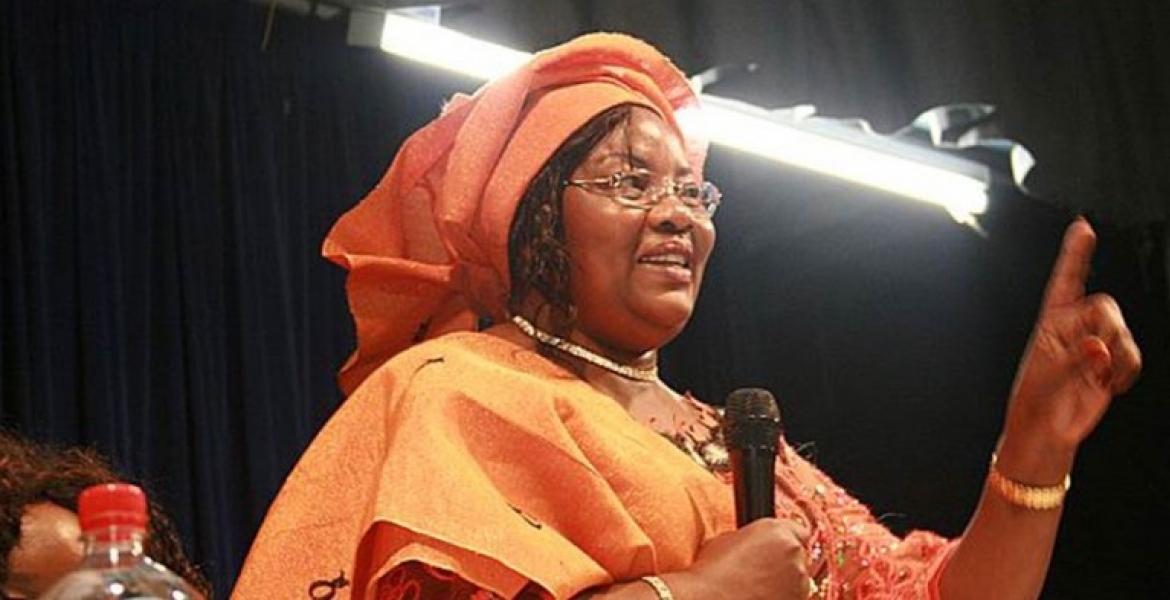 National Super Alliance (NASA) flag bearer Raila Odinga’s wife, Ida Odinga has hinted at the retirement of her husband after the August 8 polls, indicating that the veteran political leader may not contest again for the country’s highest political office.

The former Prime Minister is making his fourth shot at the presidency after failing to win in the 1997, 2007 and 2013 general elections, and will be facing incumbent President Uhuru Kenyatta in a 2013 rematch, which saw Uhuru clinch the Presidency with over 800,000 votes gap between him and second-placed Raila.

Speaking in Nairobi county when she met over Odinga, who met over 2000 women leaders at Kilimani Primary, Odinga vowed to lead women across the country in protecting the NASA presidential candidate’s votes,  calling on those present to vote for her husband.

She at the same time warned the Independent Electoral and Boundaries Commission (IEBC) to ensure that no dead voters took part in this year’s polls, as she claims was the case in the 2013 general elections.

An audit by KPMG showed that there are a total of over 92,000 dead voters in the IEBC register, and NASA has called on the poll body to eject them immediately.

She further said that the opposition will not accept rigged elections this time round, adding that they will put up all measures to ensure that votes are protected.

RAILAS WIFE
This is a very smart lady who could even take over her husband's wirk after the coming strong defeat.
ODM a well orgernised party i respect in strong opposition in Kenya's politics should hounour this lady by giving her the chance of being the first president forget about ather 5 Nasa political rejects her husband's always pick. She have only have to ignore her husbands advisers who tell her to talk of dead people voting in Kenya. Hon. Respected wife of the best opposition leader this is evil it is going to hunt to the defeat of the coming ekection plus a man i respect Governor Kidero
I akso congratulated you for acknowledging the defeat of 1997,2007&2013. But surely you never lose if it is not for your strong husbands opposition, Kenya Government could not be where it is but your husband have creatend a lot of enemies who work so hard for him not to win any election. But if you take over you will be the first Kenyan woman President work for degrees if you dont have there time to go to school don't ve like Joho hour husband's turn boy of his Eastleigh Matatu.

You are right Mrs. Raila, except that you are out of time. Your husband's retirement is long overdue. He should have retired several years ago. Should I remind you Kenyans retire at 60? If he has failed 3 times to win the presidency, what has changed? What is different this time round? Your grandchildren miss both of you. It is high time you gave them your full attention. Retire now and become consultants and mentors of future aspirants. When I see you begging for mercy for him to be given a chance to lead Kenya, it reminds me of the old Odinga' s plea, "Give me just a day". When you are tired and worn out, if not burnt out, just retire. Use the remaining energy to take care of yourself.

I thought Ida will address the promised 2017 violence by his killer husband,SAVAGE RAO.She should tell Kenyans how/what the Odinga family gained when muuaji RAO killed 1300 Kenyans.SAVAGE RAO benefited with a title PRIME MURDERER and billions of looted shillings but is that worth 1300 lives?NA BADO,HE WANTS TO KILL MORE.

@Joe Kamande you are right,the Ojinga's Need to "Retire now and become consultants and mentors of future aspirants". But my good old friend and alumni Peter K.Odhiambo tells me that the Ojinga's are not and have never been driven by love for country and people but by their elephant egos and greed.
Odhiambo continues to aver that,the entire Ojinga family is like a pack of hyenas,who would never share a stolen prey with fellow hyenas let alone their neighbors and offsprings. What a tragedy!
There is no doubt that both Ojinga and Ida know that their sell by date tag is expired and they need to seriously think retirement then we can have them down on the retirement line for the monthly elderly stipend of Kshs 3,500 that Ojinga himself has proposed.

RAILA OJINGA HAS A ZOMBIE LIKE BEHAVIOR AND MENTALITY When one is stressed at work, one feels disjointed, irritable, and sluggish. The most basic tasks become more difficult. Waves of overwhelming anxiety stop you in your tracks. You snap at others over the smallest things and find yourself eventually unable to do much of anything. And the longer you stay stressed, the more zombie-like you become.
As is turns out, there's a reason for the zombie-like behavior.
Our brains react to stress by releasing stress hormones that kick our brain and body into “fight or flight” mode. They help us act quickly, react out of instinct, and potentially avoid danger. Most of these hormones later dissipate, not causing any lingering issues.
While this kind of short-term stress, also called acute stress, can motivate us to perform at the top of our game, chronic stress, the kind that sticks around, is more dangerous. That's because it causes an excess of the stress hormone cortisol in your body.
Too much cortisol in your body can contribute to some major health issues: cancer, weight gain, heart disease, osteoporosis, even impaired brain function. Some scientists even believe it indirectly kills brain cells. I have been watching the self declared Kenyan Joshua and his Watermelon Naswa running mate from the comfort of my man cave,and I cannot help but see a very stressed jobless duo out to say and do anything to be first and second in command in the GK on August 8th.
Unfortunately,this duo has no clue that they have Zombie mannerisms,behavior,demeanor and very good candidates for cancer,weight gain,heart disease,osteoporosis and/or an impaired brain and you can take that to the bank!

Ida you should take over from hubby. You are a respected lady.