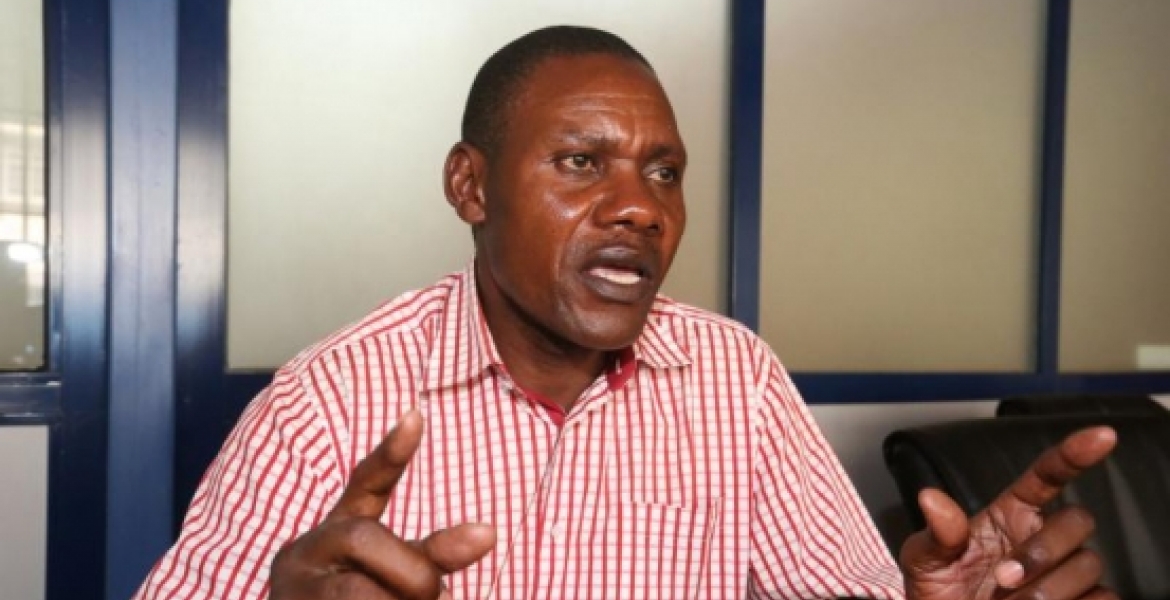 A Kisumu County man who vowed to sell his land to raise funds to campaign for President Uhuru Kenyatta’s reelection bid has made true his pledge and held his first campaign rally in his area.

Michael Omondi, an ex-convict who ‘endorsed’ President Uhuru reelection bid after attributing his freedom to the intervention of the head of state, on Wednesday kick started his self-financed rallies in Kisumu to drum up support for Uhuru.

The rally started with less than 100 youths would later attract more than 200 people, eager to listen to what he had to say.

Omondi coined his speech carefully, dwelling on the latest announcement by President Kenyatta that East African Breweries Limited (EABL) would set up a Sh15 billion brewing plant in Kisumu, where more than100, 000 people would be employed.

“The new Constitution has opened up the country’s democratic space and I want to tell you that time has come when we must only choose leaders who mean well for us. The Jubilee government has done a commendable job in developing the country and their promises now contain good things for this region,” he told the crowd.

“As I talk to you right now, the President moments ago just announced that the EABL brewery next to Kicomi (Kisumu Cotton Mills) is going to be revived and will employ 110,000. Is this not the development we want?” he asked the crowd.

Omondi vowed to ensure that the President tours Kisumu to tell the people the plans he has for them.

How does he support himself? If he was depending on that land after election he will go back to his old habit of stealing

KENYA. Yours is a Very Good observation: He will go back to his Criminal Acts; and Uhuru could or would NOT be there to set him free AGAIN

Do not worry you can not sleep out or miss food i have a partner a luo man in Eastleigh who can give you a job. We will team up with all good people to unite and help ourselves piece

Why not a Uhuru (Kikuyu) giving the Sacrificial Luo guy a job?

Kahura, the problem with Kikuyu and Luos is that, they are tribalists. As a Kikuyu, how did Mzee help my area; Moi...? Kibaki/Raila...., and now Uhuruto. Kahura, this people want you to vote for them so that the status quo, their lifestyles, interest of their tribes, families, relatives, villagers bra bra bra. Kalenjins after running down parastatals like Kenya Post ..., have now invaded Kenya Pipeline, Kengens and other energy sectors. Who is the CS? At Kengen, young Kalenjins engineers are replacing experienced and long time engineers after working under them for less than a month. Not until Kenyans will stop voting their tribes. I will just spoil my vote by voting for Bida the Somali, other than vote for thsee Kenyan dynasties, at kina Uhuru, Raila Madavd, Weta, Kalojo, Rutto and other criminals who are scared they might loose their lifestyles after August. Kahura you are still doing the same thing since you came to the US. Campaign for whoever but after August, utakaa ngumu kama Ngumo. Kibaki and Raila lied on us in 2002. Where are the billions they promised to bring back home? Sympathize with Kenyans. Naka nyumbani siku hio. Can't vote them in then later they start stealing again within some months or so.

Uhuru gets briefings everyday of what is going on around the country. Whether he loses or wins he will not forget Michael Omondi Who is risking his life by doing what he's doing in Raila's backyard.

I wish this guy Michael Omondi well.Why is it that in Ojingas backyard,Even talking about the developments that the Kenyan Government is doing over there is seen as a matter of life and death?I mean, the Luo people just like any other group of people deserve better than what this Odingaism has been offering them.I think that the Luo People need to speak up and allow the Kenyan Government to serve them better.By for example, allowing all Kenyan Leaders to come to the heart of Luo land and speak to them.They should allow the various Kenyan leaders come to them and tell them of what development projects they have in store for them or what they can do to improve the peace politics over there.This idea of investing all the Luo politics in idol following of an individual who does not necessarily mean the best for them.But rather is just using them to advance his own insatiable political ambitions is just sad.Let the Luo People work with different Kenyan Leaders in order to find ways of improving Luo Land.Not this nonsensical idol following of an individual.

UhuRuto are Billionaires; this guy Pauperrnaire. Think about it.

On Tuesday morning, I was patronizing a majority Luo eatery in Nairobi with what appeared to be 100% luo workers. The discussion turned political and to my complete surprise, most of the workers vowed to vote for Uhuruto. Only one out of 6 workers was going to vote for Raila....Not sure whether that was an isolated observation or a sign of things to come.

@wodheti. You have to admit that UHURUTO have really done a good job at maintaining the Peace and civil order in the Country.Also their Development record is undeniable(SGR,the road works etc).Yes there will always be issues with any government that need improvement, that is just the human condition.But I believe that UHURUTO are offering a much better path for the country than what NASA has to offer.NASA's leaders have been the leaders of chaos and disorder in the country(think 82 coup, 2007-2008 PEV, the numerous calls of MASS Action, the refusal to admit defeat ,the stating that they will not even go to the supreme court should there be an issue with the election etc) 2)Nasa leaders have also not been development conscious, some have been the de facto leaders of Kibera for 20 years,what have they done for the people of Kibera.3)Nasa leaders are probably worse when it comes to other ills in the country eg coruption.......So I will vote for UHURUTO. They have a better track record and they have a better agenda for the country.Please don't say that the governance of the day does not matter.Because it does.Ask the people of Syria for example,they will tell you the government of the day matters, no doubt about that.Vote for UHURUTO and JUBILEE.We will all be better off for it.