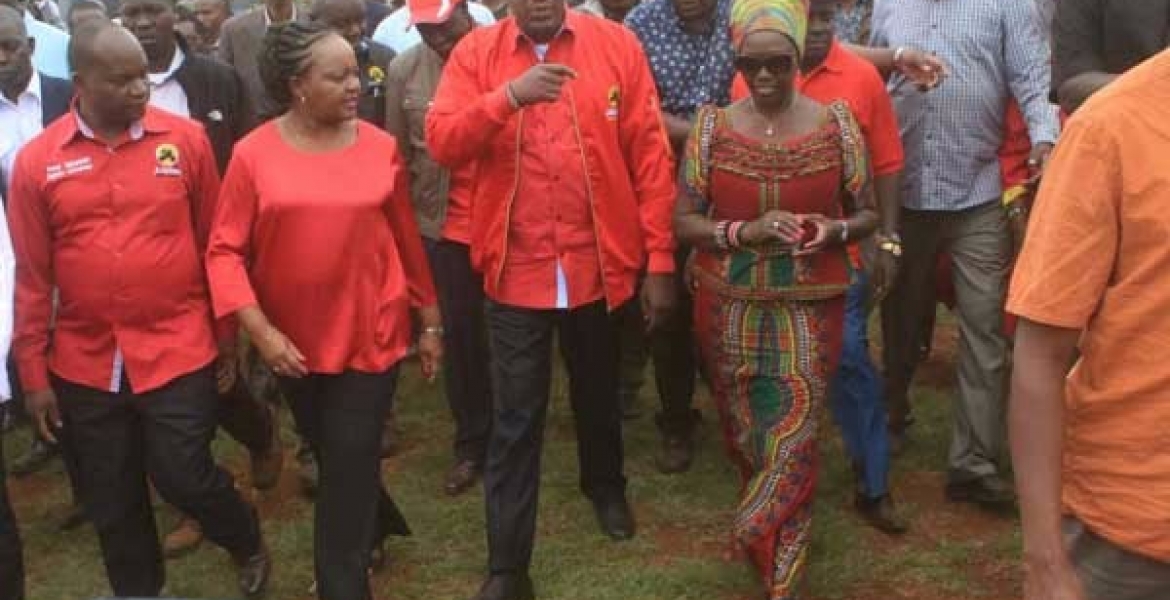 President Uhuru Kenyatta and Deputy President William Ruto have poked holes on the National Super Alliance (NASA) manifesto launched on Tuesday, accusing NASA of trying to reverse the gains of the new constitution.

The Jubilee leaders described the NASA blueprint as a hollow document that has no agenda for the country.

The two leaders, speaking while on a campaign stop in Kutus, Kirinyaga on Tuesday, hit out at the opposition for its clamor to abolish the existing system of governance and introduce a new one, terming it a retrogressive move aimed at derailing the country’s growth.

NASA, in their manifesto pledged to introduce a hybrid executive system of governance to replace the t presidential system, a move President Uhuru termed as a plot to deny Kenyans the right to elect leaders of their choice.

The head of state further laughed off the opposition claims that they will scrap off the digital literacy program introduced by the Jubilee government.

"While the whole world is going digital and embracing e-books, they want to go back to the old days". Uhuru said. "They have been hurling accusations and insults around. I thought that if they had an agenda, we would have seen it yesterday but their manifesto shows they have no agenda for this country," Uhuru added.

According to President Uhuru, NASA’s manifesto had glaring "inconsistencies and was not built on any foundation".

"The world is moving towards digital and we are extending fiber optic to every location because that is where the country is going but they are now telling us that they will ask for people to donate books," President Kenyatta said.

"They did not tell us how they will provide fertilizers and farm inputs but they will build stores. How can you build a store without providing for how food will be produced?" he posed.

Agree! I have not heard anything concrete that NASA would deliver to Kenyans. Rhetoric and more rhetoric is the NASA center-piece. Kenyans are not stupid. NASA action speaks better than words. Put your eggs on the table.

Why would he KEEP the NASA Manifesto? As a matter of fact I am GLAD he TORE it Apart ( for if he had KEPT it he would Burned Midnight Oil trying to CopyCat it for Next Day Campaign).

By the way, is that JAMBAZI WAIGURU of the former NYS walking next to Uhuru?

" Mucera na mukundu akundukaga take." This is a Gikuyu/Embu proverb that points out that, you become a member and act like the company that you choose to hang around with.