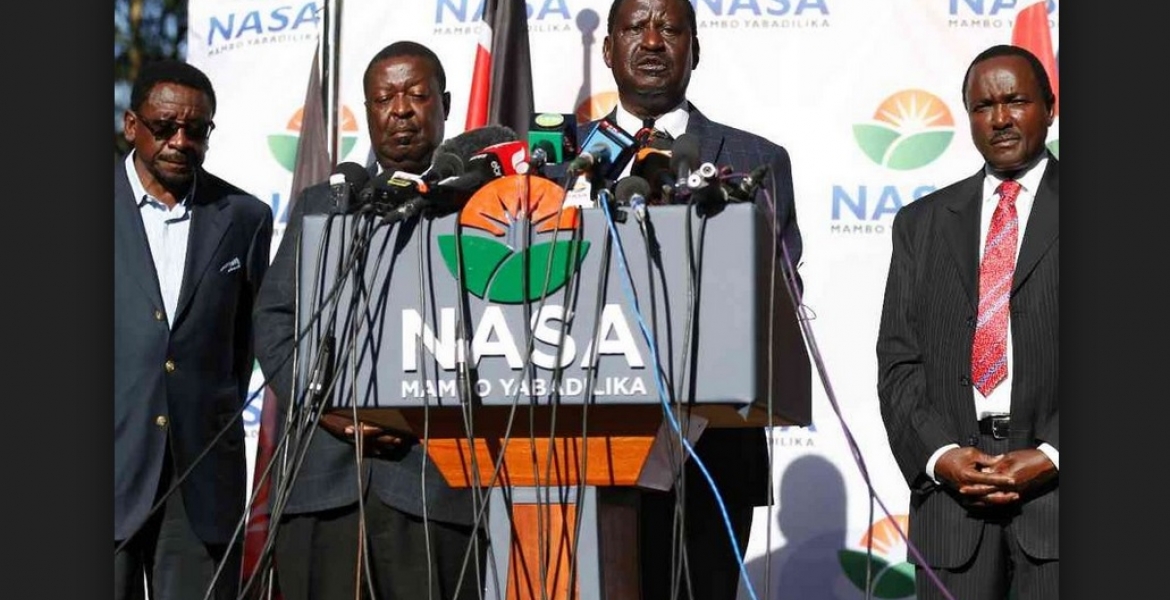 In a statement by NASA campaign manager Musalia Mudavadi, the coalition told Uhuru to desist from making utterances that suggest he won the election legitimately and that they have a petition challenging his victory at the Supreme Court.

Nasa accused Uhuru of declaring himself winner during the swearing in ceremony of Bomet Governor Joyce Laboso and asked him to wait for the court's verdict.

“This characterization of the results of the contest is disturbing but hardly surprising. The President and his Jubilee team are suffering from an acute legitimacy deficit and are clutching at every straw to acquire it”, they said.

“The Jubilee fraudulent win in all races is not synonymous with winning the presidency."

Mudavadi said Nasa will prove in the court that Uhuru's win was computer generated.

In a sworn affidavit in response to Raila Odinga's petition at the Supreme Court, Uhuru dismissed NASA's petition saying that Jubilee's majority win in the bicameral Parliament proves he won fair and square.

Nasa through the statement, however, dismissed the Presidents argument.

"The number of governor and parliamentary seats cannot be compared with presidential votes since NASA as a coalition had multiple candidates whose combined votes were more than those of winning Jubilee candidates."

The incumbent president is still president until the high court rules . So president Uhuru is still president until either the court declares that yes indeed Raila won, in which case President Uhuru would cease to be president by handing over the reins of power during inauguration, or if the court decides that there's gonna be a presidential run off, Uhuru continues to be president until the run off is over and the duly elected president is inaugurated. Simple. I hope that someday Kenya's democracy will mature to the point where elections will not evoke such strong emotions in people. We elect leaders to serve all members of our society, one kenya one people. The day Kenyans will see each other as brothers and sisters regardless of what tribe one happens to be born in, is the day kenya's democracy will mature. Let's celebrate each other's unique abilities and realize that a diverse Kenyan is a rich nation. Everyone has something special to bring to this table of brotherhood as we all contribute our talents qnd unique abilities to catapult Kenya to a place in development that other nations in Africa and indeed the whole will be envious of. This is possible brothers and sisters only if we commit to love each other united by Love for our beautiful country.

Am sorry to say this but this guys should call it a day in politics it has really worn them out.I know age will catch up with us one day and for this guys they look so tired.

Wise words if only they were true.Now there is talk of some sections of the country seceding as they feel as do 6M who voted for the other presidential candidate that did not win that the election was not free or fair.Now it is up to the courts to decide . Can the courts be trusted it remains to be seen.Unity and peace when 50 years after independence some communities are still marginalised and it appears will remain so for another 5 years.Why pretend by preaching peace when in reality some people are yet to recover from the 2008 violence?

Its silly to talk about the 6million voters, you copy a lot from the US. After their elections no one ever talks about Clinton voters.

Which communities are marginalised? Or failure of the power hungry fool to win the presidency means his tribe is marginalised ? Anyway whatever he says his sychos believe. Keep waiting for maana on your way to your imaginary Canaan.

Uhuru is still kenya president. Nasa need to grow up. He is incubent and thus our prwsident.

Uhuru is NOT The President yet. He is "President elect". The President only begins to exist after swearing in ceremony. Let's learn these simple legal facts & stop responding with feelings & DNA.

So in your world there is a power vacuum in Kenya ? If say we are attacked we would have to wait for the Supreme court to rule then swear the president in before responding as there is no commander in chief to make the decision ? Sometimes it's better to research or read the constitution before displaying stupidity.

NASA is suffering from acute illegitimacy surplus and that's why they keep lying to everyone that others are thieves. NASA is the thief.

The 2010 promulgation of the new constitution was a proud and hopeful moment for Kenya. Devolution put the power back in the people's hands. It brought the government close to the electorate who now have a duty to hold the county government accountable. A lot of education is needed to make people realize this power they now hold. If a public official is not accoutable, not delivering services or misuses public funds, people should know how to deal with that. These public officials are actually employed by the people who voted them in, either they perform and deliver or get ejected. Why should the employer stand by and watch the employees misusing public funds with impunity? Kenyans please do your jobs by overseeing the use of your money by county governments. They work for you. You should see meaningful development that impacts your lives.