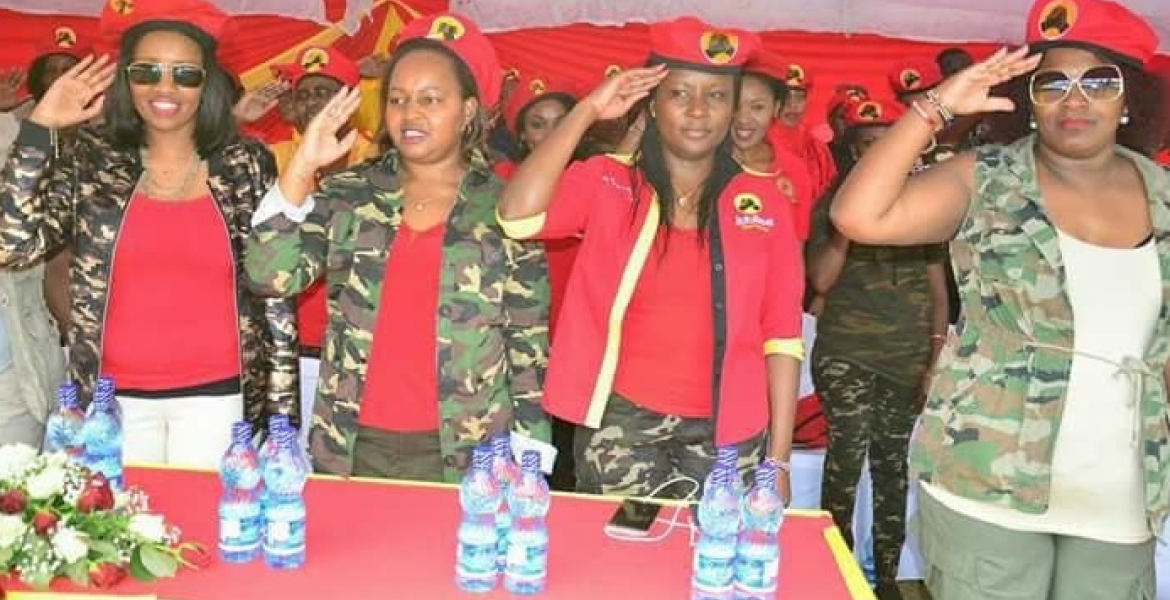 For the better part of Wednesday and Thursday, a section Kenyans on Twitter continued to raise questions on whether it is legally right for the group to dress in military gear.

The group unveiled its operations in Sunday in Nakuru, with members seen donning military gear as they drummed up support for President Uhuru's re-election bid across the country. 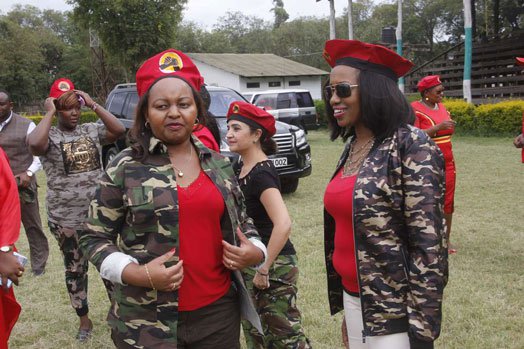 This sparked fury among a group of Kenyans, with some terming it a mockery to the reputable Kenya Defence Forces (KDF) and its officers. Here are some of comments by Kenyans on Twitter and Facebook.

Onyango Ochieng Jr. said: "What if it was ODM/NASA confederates wearing this military fatigues...you people would be waxing all manner of conspiracy theories. Shame on Uhuru, he has turned this nation into a thugs paradise,".

Jp Maina said: "Okay, are civilians allowed to rock combat now?
Last I checked it was illegal.
There is a day some AP officers picked up my mom for wearing a combat jacket and she had to pay them 2k to be released,".

Victor Mac'Simwa notes: "When I was growing up, I could c police arrest civilians arrested for wearing combat uniforms, did this law change?,".

"Why are Jubilee politicians dressed in military fatigue like rebel leaders. Which war are you in or going to? Bel Akinyi said.

"It's should not be allowed as it mockery, abuse to the service men, confusion to the public," Hakeem IGA says. "I thought ni hatia for civilians to wear military Uniform. Why is this being tolerated," Nancy Sikukuu asks.

"Sometime back the Government outlawed wearing military-like clothing. Is Jubilee a law unto itself? Or is it a case of 'our country'? Akach Jim questions.

If Kenya were a true democratic nation, Waiguru should be in jail!

Perhaps she also stole the uniforms from NYS! Now they are wearing them.

GG. You could be Right.

Women in combat uniforms turn me on

Pita. You sound a Sissy to me.

Pita. Are you Talking about My Mama? Yo Mama!!! Hah!

In this political climate, I think this was poor choice of clad because of the interpretation that would come with it Kenya need proper PR people . We live in sensitive times

formerlyguest 2. Soon you will see those Uniforms on Streets of Kisumu killing NASAns. No wonder Uhunye Just Dispatched a John KAMAU (in place of Titus YOMA to Gartisa) as New Kisumu County Police Commandant. And I call it KIKUYU Tribal INTIMIDATIPN of Kisumu NASAns).

Uhuru is the worst president Kenya has ever had. In 2013, he and Ruto talked about being the "digital age leadership." They have turned out to be a real Kenyan nightmare! He (Uhuru) had duplicated his father's nightmare legacy 39 years later after his father's death. Toroitich, where are you? Please talk to your project to resign immediately before Kenya becomes another Rwanda!

From now onward, no offspring of a former head of state should be elected anywhere in Kenya!

Imara. Oh! My!! Oh!!! "Digital Age Leadership"; I now get it. So Raila was Right when he Called them UhuRuto "Vifaranga vya Computer." Oh!My!! Oh!!!

Sasa warembo wa JP mnaleta mchozo kwa kazi. I almost jumped the gun to defend you as "Rosie the Riveters". But it appears like only an ill-timed show, no declarations, no irreducible complexity (read minimum). I may have missed the deep message of this parade or charade-the less I see and say the better.

Ati jeshi la mzee more like jeshi la kawmana.Seriously all these women are from one tribe who think Kenya belongs to them Form your KCA then you can dress in military attire over there in Canaan we do not accept overweight sleigh queens and homewreckers.All of them have been involved in extra marital affairs.Will not do hawa si vifaranga ni kuku wazembe.

In the US that would not be a big deal. Kenya trying to copy US in some ways, so?

So US is not Kenya and Kenya is not US-one need not copy everything. Sorry @C, I don't mean to ruffle the feathers, just an urge to answer the so?

Born in Kenya and raised and we all copy the states. It's okay here to dress however you want. I go to Kenya in combat and nothing happens

Even in the USA its against the law to wear military gear if you are not in the military.You many have noticed that those uniforms the women are wearing do not have any insignia, title...ect.And there lies the difference.Without titles insignia, they are pieces of cloth alike any other.

@Imara - "If Kenya were a true democratic nation, Waiguru should be in jail!" and the inciter and murderer Ojinga should be hanged for treason!

I go to Kenya for at least a month each year and wear combat and nothing happen. Will be there in a few weeks and this will make me wear it more often

Nothing should happen.Military uniform is just a piece of cloth like the rest we wear. However it becomes something different when you attach badges,insignias, titles...

If usa was a Democratic nation Obama’s will b in jail for killing women n kids in Libya.My boy bush Iraq killings so pple should shrink before they write???So acha sweetie waiguru alone she went through the due process of investigations which oboma bush never went

When you identify Raila as "Muaji," Please have the courage to include Ruto - Eldoret and Uhuru - Naivasha and Nakuru "Wauaji." The truth finally came out and now we officially know exactly what the former ICC Chief Prosecutor Moreno Ocampo did behind closed doors. He, (Ocampo) denied justice for the over 1,300 Kenyans killed after the election of 2007. For further information, please listen to Martin Ngatia (You Tube Videos) describe Uhuru and Ruto participation in the Kenyan holocaust!