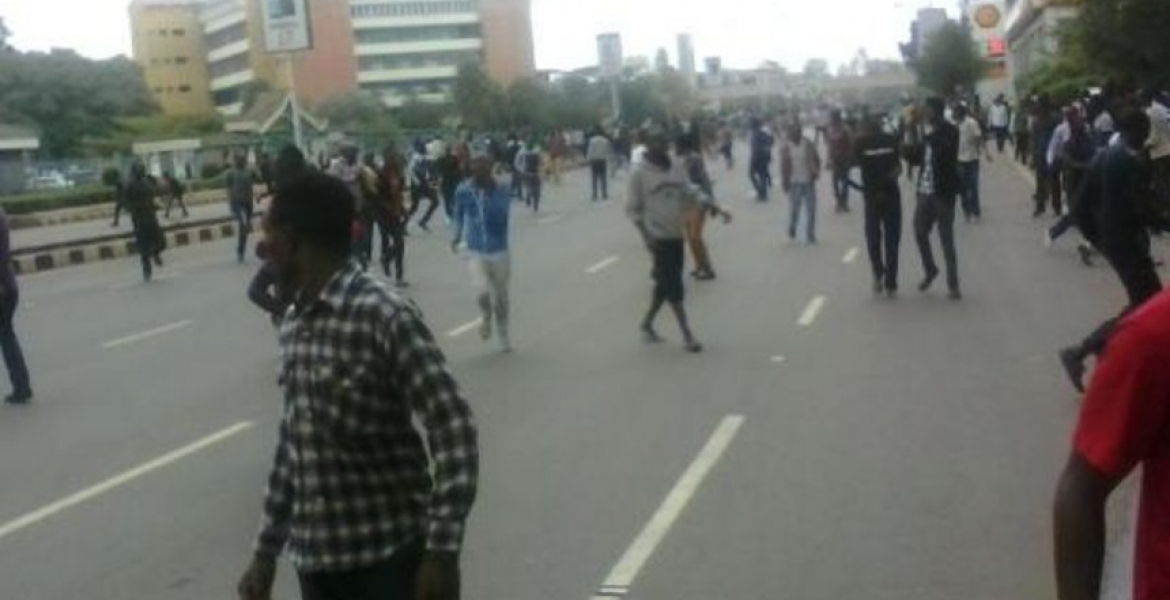 A section of University of Nairobi (UoN) students on Saturday morning staged demonstrations in the streets on Nairobi demanding for the immediate release of Embakasi East Member of Parliament Babu Owino.

The controversial MP was arrested outside Parliament buildings by Flying Squad officers on Friday over claims of assaulting a parking attendant at a parking lot in Westlands, Nairobi.

The students blocked sections of the roads leading to the Nairobi central business district, claiming that the MP is being falsely accused.

"We only have two ultimatums for us to get off the streets. We demand the release of our comrade Babu Owino and release of our money so that we can proceed with learning," some of them shouted.

In a post on social media on Friday evening, Babu said he had been taken in for "attempting to overthrow the government".

"Been arrested. Held at Parklands. Charges are two. Harbouring intention to overthrow the government. Assault. It shall be well," he told his Twitter followers.

Speaking to The Star via phone, the youthful MP said that the arresting Flying Squad officers told him they had orders from Nairobi Directorate of Criminal Investigations boss Nicholas Kamwende.

"I was arrested and booked in here and the only person who can clearly tell the nation what happened is DCIO Kamwende Ireri."

"I hope he comes clean on this because I am innocent on any allegations being fabricated," the first-term legislator said.

Nasa leaders led by Raila Odinga visited Parklands police station, where he spent the night, to try and secure his release.

This thug refused to pay the parking fee and assaulted the parking attendant and the students are demonstrating for that? Give me a break

I have always been for turning University of Nairobi into a homeless shelter or Sokora rehabilitation center. It's a well known factor Nairobi University is no longer an institution of learning. Majority of the students are either taking bhang, cocaine, meth or are in prostitution-both males and females. The drug addicts graduates of this institution gets priority in obtaining governments jobs when they graduate and hence the pathetic State of Kenya today. They occupy high positions in the government. In Kenya today you cannot get normal rightful services without paying them bribes. The so called civil engineering graduates are most dump people you find anywhere in this World. Kenya has to depend from expatriates from China and other countries because this dump University of Nairobi graduates cannot be able to design or build anything workable, from a bridge to a culvert even investing billions of shillings in the University. Nairobi University need to be permanently shut down. It is a bleeding hotbed for Kenyan corruption!!!

“Then cried they all again, saying, Not this man, but Barabbas. Now Barabbas was a robber.”
‭‭

One can't help but wonder what these Luo goons learn at UoN. It's like their brains are filled with ugali instead of grey matter!!!

No wonder the UofN is not even ranked in the top 20 universities in afraca. Let alone the world.
It would help agreat deal if the concentrated on their studies,and leave politics to politicians.At least till they graduate.
Babu claims that he was in Mombasa when the said incident occurred .Certainly by now the cops should know the truth,and tell the public.
Rioting will not help your comrade.If you have any grievances,take them to court.Otherwise you should not be in this so called institution of higher learning.

I am told by a very reliable source that since his election as MP,the lad has become so rude and arrogant that he even urinates on Mama mbogas nyanya na mboga.What a stupid LAD!

This fool was growing some horns. It is time he faced the music. This is the same fool who insulted UK. IF any student is stupid enough to riot because of this fool they deserve to be thrown out of the university.

Imara I think that you are illiterate. Bubu is in for Assault not Insult.