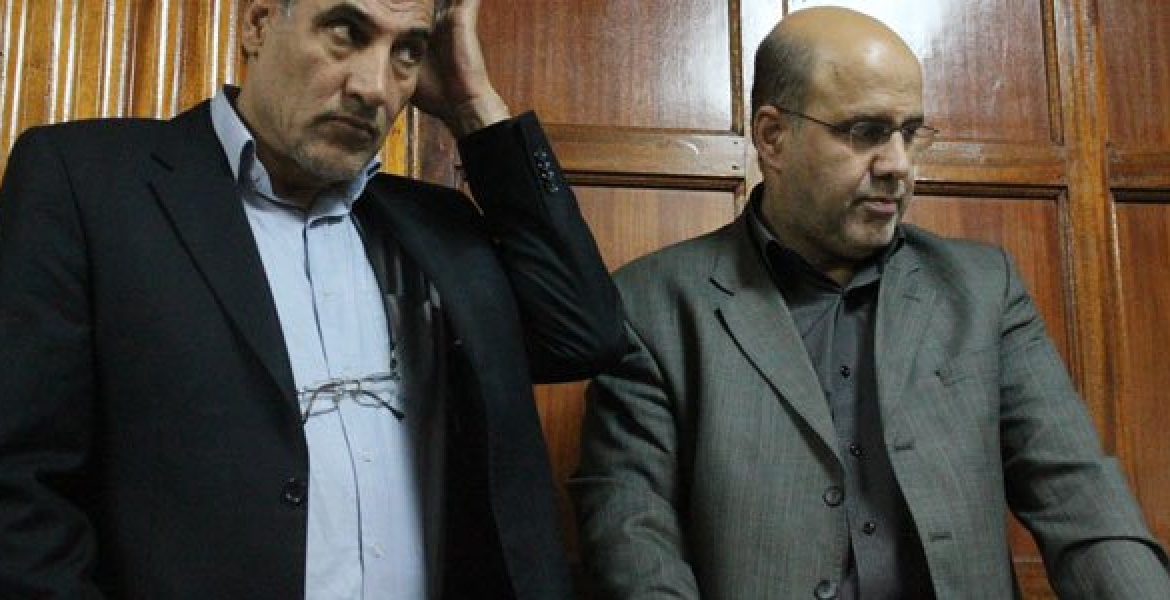 Iranian envoy to Kenya Hadi Farajvand has reacted to claims of pushing for the release of two terror suspects who are in custody of Kenyan authorities.

Speaking at the Iranian Embassy in Lower Kabete, ambassador Farajvand has distanced himself from the alleged scheme to illegally secure the freedom of the two Iranian terror suspects.

He has refuted reports of working with two Kenyans to secure the release of two, who were serving life imprisonment in Kenya.

Last week, officers from the Directorate of Criminal Investigations (DCI) arrested two suspects Wesley Kiptanui Kipkemoi and Shemgrant Agyei who claimed to represent the Ministry of Interior during a meeting with Farajvad.

Farajvand is said to have given the two an unknown amount of cash as a bribe to secure the release of the suspects.

However, Farajvad now says the two Kenyans reached out to him and defrauded him off an unknown amount of cash in the pretext that the government would release the two terror suspects.

“They said the terror suspects were going to be freed by the government of Kenya and that they were contacting me on behalf of the Ministry of Interior, which I found suspect because the said ministry could have contacted us directly. They, however, did not reveal their names,” Farajvad says.

He says he demanded to know their identities and threatened to report them to the police but the two threatened to go to the media if he did so.

“I told them that I would give their mobile phone contacts to the police if they failed to disclose their names, but they threatened back, saying they would go to the media if I reported them,”
Farajvand notes.

The two Iranian terror suspects Ahmad Abolfathi Mohammed and Sayed Mansour Mousavi were arrested in 2012 after they were found with RDX- a lethal explosive.

The two claimed they came to the country as tourists and are accused of planning a terror attack.

A Nairobi court sentenced them to life imprisonment but the sentence was reduced to 15 years after the two appealed the judgment at the High Court.

Later, the two were set free after the sentence was quashed by three judges at the Court of Appeal.

This prompted the Director of Public Prosecutions (DPP) to appeal the decision at the Supreme Court.

The Apex court allowed police to detain the two suspects pending a ruling on their fate.

Police believe the two are members of Quds Force, a highly trained Iranian Revolutionary Guard that conducts unconventional warfare and intelligence activities and is responsible for extra-territorial operations like terror attacks.