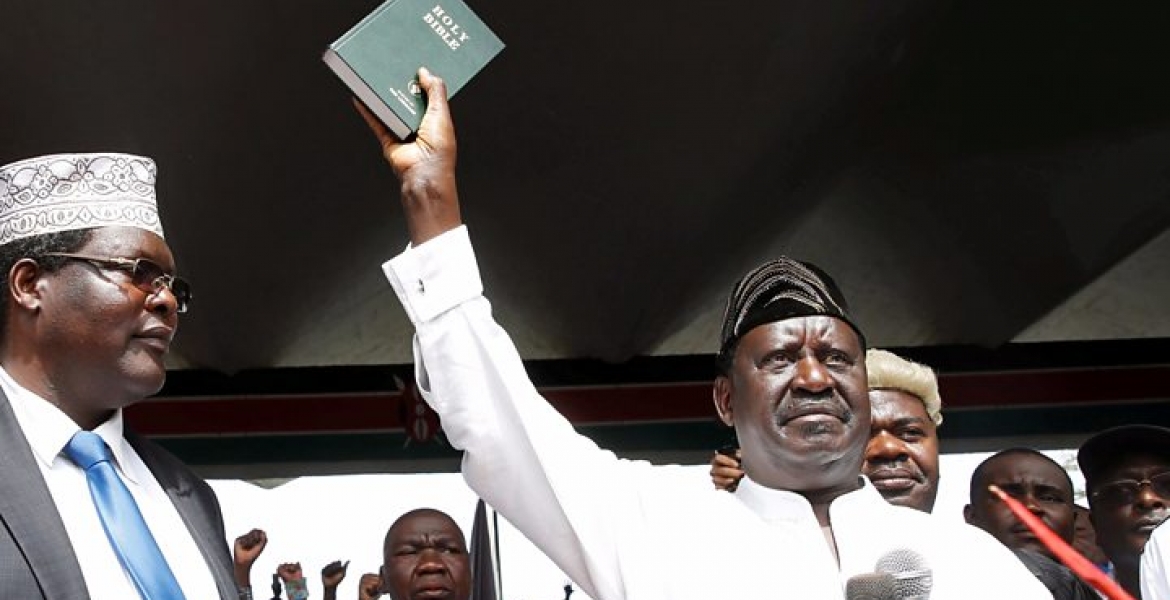 A court on Thursday ruled that Orange Democratic Movement (ODM) leader Raila Odinga did not commit any crime when he was sworn-in as people’s president in January 2018.

Chief Magistrate Stephen Mbungi ruled that the oath administered on Odinga was not unlawful and would only have violated the law if he swore himself as the president of the Republic of Kenya.

“From the content of the oath, Hon Raila Odinga swore himself to the office of the people’s president which does not amount to any crime. He would have only breached the law if he swore himself as the president of the Republic of Kenya,” ruled Mbungi.

The swearing-in would have only amounted to treason if Raila and the organizers of the event declared their intention to overthrow the government, the magistrate said.

The court made the ruling in a case where Ruaraka MP Tom Kajwang’ was charged with treason and taking part in an unlawful assembly.

Raila’s ‘oath’ was administered by Kajwang’ and deported lawyer Miguna Miguna. Kajwang’ was facing two counts of committing a capital offense of treason and for taking part in an unlawful assembly.

“From the evidence on record, I am satisfied that Hon Odinga took an oath, but it is not clear who administered the oath on him. The prosecution did not adduce evidence to show whether Miguna Miguna and Tom Kajwang were qualified and did administer the oath,” ruled Mbungi.

“The attire he (Kajwang’) wore that day is the normal one worn by advocates of the High Court and to me, there is no law or rule which restricts when and where it can be worn,” added Mbungi.

On the second count of organizing an unlawful assembly, the magistrate ruled that there was no evidence to prove that Kajwang’ organized the meeting at Uhuru Park.

“The fact that the accused is a known member of NASA cannot make the court to assume that he was concerned with organizing the event since it is possible the meeting was organized by other people and he was only one of the invited guests,” ruled the magistrate, acquitting Kajwang’.

Nonsense kenya as a country n kenyansas the people will celebrate when this idiot goes 6fit under.Useless devo who dwells in innocent kenyans blood n who loves pple to remain in poverty.How can somebody who have bin a mpig for more than 25 years don't even build a single toilet n yet he dares call himself a leader.Stinking nonsense