Uhuru, Raila Give Details of 19-Hour Meeting that Brought about the Handshake 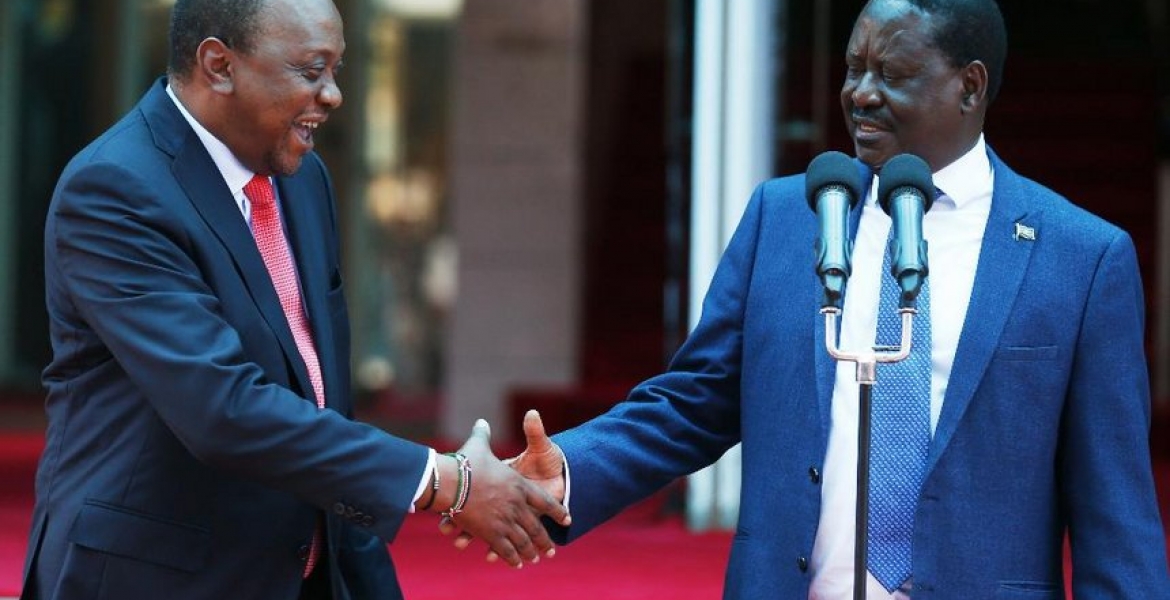 President Kenyatta and ODM leader Raila Odinga have for the first time shared details of the nerve-racking meeting that brought about the March 9th, 2018 handshake.

Kenyatta and Odinga revealed the details during the unveiling of the Building Bridges Initiative (BBI) report at Bomas of Kenya on Wednesday.

Odinga said the meeting where they discussed how to lower political tension occasioned by the bitterly-contested 2017 presidential election lasted 19 hours. He said it was not easy for them having traded all manner of insults in the run-up to the election.

“It took 19 hours and it was not easy, as the president will explain to you later because we had called each other names,” said Odinga.

It took more than an hour before the two delved into the real discussion due to tension, according to Kenyatta. “When we met with Mr. Odinga we took tea for almost 45 minutes without having any discussion,” said Kenyatta.

“All we could ask each other is how is home… how is your wife… how are the kids? There was nothing else we could talk about because of the anger from the insults we had been hurling at each other,” he added.

“We were just the two of us in a room… we almost spent the night there. But after one hour that’s when we began talking.”

Odinga admitted that before they met and agreed to talk, they were under intense pressure from their supporters not to drop their hardline positions.

“Our people said now that you’ve been sworn in as the People’s President, let us remove all portraits of the president from all public buildings in our strongholds and heap them somewhere and torch them and declare ourselves sovereign and begin to collect taxes and do our things. I looked at that and I said that is taking Kenya to Somalia,” said Odinga.

“On the other hand, the President’s people told him if somebody else is sworn that is treason. Arrest him, prosecute him and hang them. So arrest Raila now. And the president also had an issue with that.”

He added: “It is under those circumstances that counsels of goodwill prevailed and we ended up having a conversation with the president.”

After hours of long deliberations, Kenyatta and Odinga resolved to call for a ceasefire and signed the unity pact in the presence of their respective lawyers.

“Eventually after all that long deliberation, we agreed we have something we can put together. We invited lawyers to come and put our views together. We told them exactly what we thought was wrong with our society and what needed to be corrected and we gave them the responsibility of putting it together,” said Odinga.

1. Bedroom agreements between two men will not solve anything.

2. Why should the other tribes suffer the consequences of the actions of two tribes—Kikuyus and Kalenjins?

3. Luo's cannot survive without other tribes, regardless of what they say.

4. Secession is the future. Kenya has to be divided into two. tribes of thieves and killers commonly know as Kikuyus and Kalenjins (and their sympathizers)need their own country.

My question is:
1. Why are the other tribes not getting rewarded for not killing their neighbors?

2. Why are killer tribes like Kikuyu and Kalenjins getting government posts after slaughtering each other?

3. You preach peace but it’s serial killers who get government positions.

4. Why should the rest of us , the real peaceful Kenyans continue to endure emotional trauma and economic difficulties brought about by tribes that are full of criminal elements?

why build a bridge for serial killers to come and kill our people?? Grab land and rape our women???

Rewarding Evil communities that thrive on bloodletting is not supporting Peace.