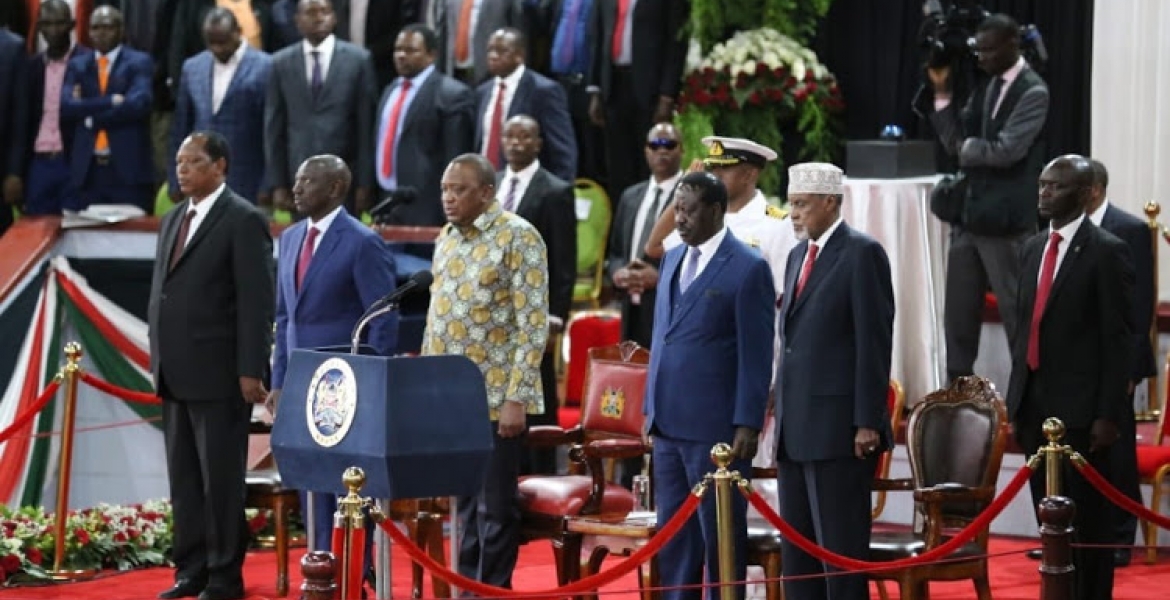 Speaking during the launch at Bomas of Kenya, Kenyatta and Odinga preached unity and the end of divisive politics in the country.

“Being ambitious is good, it is healthy but don’t let your ambitions overshadow our ability to fix those things that will help you achieve your ambitions,” said Kenyatta.

He added: “We cannot build Kenya with one day. Let us focus on what will put us together. We have 42 different cultures that we should be proud about. Let us embrace our culture and tradition.”

On his part, Odinga narrated what pushed him to agree to a unity pact with Kenyatta after the acrimonious 2017 presidential election.

“Our people wanted us to burn your [Kenyatta] portraits and start collecting taxes. I realized that was taking us to Somalia. It took us 19 hours [the meeting leading to March 2018 handshake]. It wasn’t easy. We had called each other all sorts of names,” Odinga said.

Odinga said there will be a team of experts who will look at the report’s recommendations and urged that its fate should be decided in a referendum. “Usiwachie wabunge. Wacha wakenya waipitishe,” he added.

Among the key recommendations made in the report is the re-introduction of the Prime Minister’s post, a mixed cabinet (experts and MPs), and the allocation of more resources to county governments.

The report recommends a President with executive authority and who will be directly elected by the people, while the first runners up in a presidential election will be directly nominated to Parliament as leader of the official opposition.

The report says the Executive will comprise the President, Deputy President, Prime Minister, and Cabinet Ministers. To be declared President, a candidate must garner at least 50 percent plus one vote, and at least 25 percent of total votes cast in at least 24 counties.

The President shall remain Head of State and Government, and Commander in Chief of the Defense Forces while the Deputy President, remains the President’s principal assistant, and running mate at the ballot, according to the report.

The Prime Minister shall be an elected member of the National Assembly and will be nominated by the President and approved by Members of Parliament. The PM shall control and supervise the execution of day-to-day functions and affairs of the government as well as be the leader of government business in Parliament and chair of Cabinet Sub-committees.

The report further recommends all public officers should be banned from doing business with the government. It also recommends that all wealth declaration forms should be open to public scrutiny.

To promote whistle-blowing, the report proposes whistle-blowers should be given a reward of five percent of recovered proceeds. It also recommends the elimination of sitting allowances for salaried public officers, a move likely to hit MPs and MCAs.

Further to this, the report recommends that the running mate of every candidate for governor should be of the opposite gender.

The BBI team also recommends the transfer of Health sector personnel from county governments to an independent Health Service Commission, a centralized employer for doctors and nurses.

This BBI is scheme to legalize and institutionalize patronage and corruption. It should be rejected. All of the problems it pretends to solve already have solutions in the current constitution and government system.

Unfortunately for them, they are out of time.
there ideas are old and obsolete, they won’t solve anything.

Time to throw away the expired milk.

These thieves, serial killers and hater mongers are way past their expiration date.
Expired and have been rendered obsolete by time, the internet and economic reality.

The system has not only failed, it’s outdated.

You are guaranteed freedom of speech except "yelling fire in a crowded theater." Many years ago, a Kenyan in the US with a habit of posting views advocating violent overthrow of the Kibaki government in a Kenyan site ran a foul with the law here. He disappeared never to be heard from again. Advocating violence and death with a traceable devise? Not actions of the sharpest tool in the shed.

You know BS when you see bull. What in the name of God was/is the purpose of this nonsense called BBI? How does the post of pm help Kenyans? As writer above clearly states- what is new that is not captured in our governing constitution? How do we cure corruption by being corrupt? Spending billions to collect garbage in the name of a report that can be done as homework by form two students is corruption. Bottom line Kenyans are paying billions to massage the ego of two ingrate families who believe that Kenyans must die for them to be in leadership. For uhuru the logic that you bring peace by piing/poopoing on those that have sacrificed their all for you is juvenile- you will regret that choice.You do not make enemies to make friends- you seek more friends.The display at bomas was a disgrace and a national shame.You cannot sideline members of majority party whose votes you need to pass any bill and allow a forum for those who sponsored deaths/disruptions of elections a chance to sneer at those who kept the peace.Seeing odm goons take their heckling at a "peace" meeting is a travesty. Raila owes Kenyans an apology . There is nothing to celebrate when a mad man decides to put on back the clothes because soon enough he will remove them for all to "see". Young people should just call this for what it is-BS. Uhuru and raila could have just met in their houses and shake hands. We do not need to pay for it! Why would one sanitize lawlessness? I heard joho call rail- "people president" what the hell is that? Why not elect oneself? That garbage almost costed our country- for that he is a hero? The oath taking goons are now MCeeing national healing forums? Lord have mercy! Parliament should seek audit of the monies used for "family business". You refuse to accept election results- kill people-swear yourself-take away 10billions-just so you can shut your blank up? Kenyans must be fools to buy the snake oil.All that stuff on BBI could have done without a coin being used!

He is a despot.

BBI does not even mention anything to do with curbing corruption which's the underlying factor for prosperity. This real tell us Uhuru is not for a common wananchi as we though.
Tackling corruption is better than concentrating on his weak 4 Agendas

You need to manage your expectations.
These are thieves, landgrabbers , electoral fraudsters, serial killers, liars and Al shabab financiers.

You surely do not expect that caliber of crooks to solve corruption, electoral injustices, human rights violations and joblessness.

How will they attract investors? Only foolish investors invest in a country being governed by ICC criminals , thieves, liars and killers.