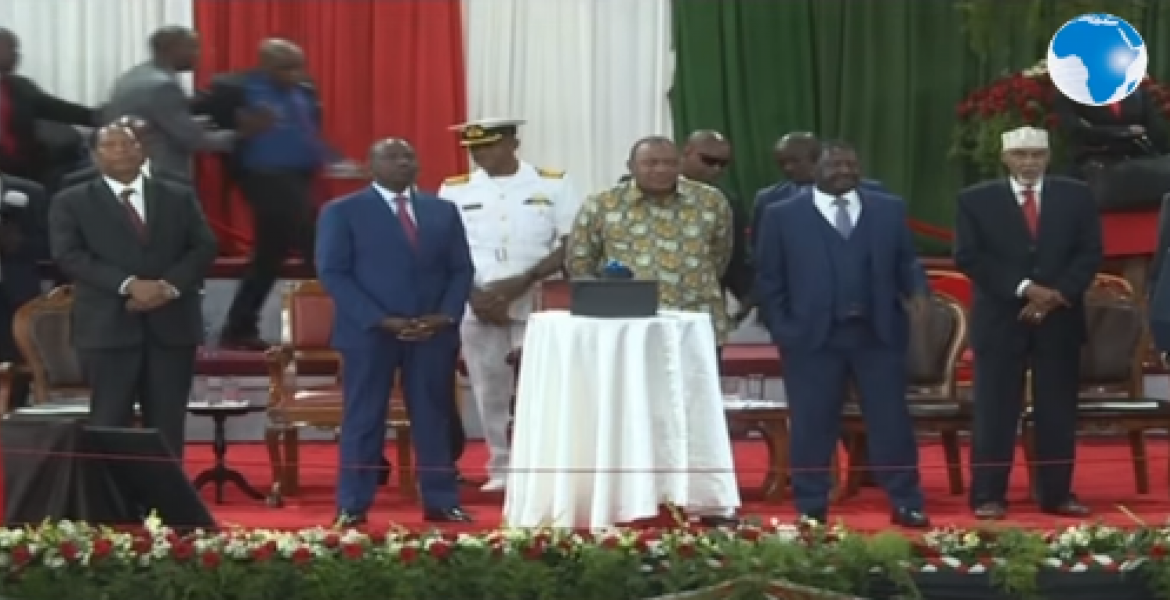 A video of President Kenyatta’s bodyguard bundling Jubilee digital strategist Dennis Itumbi out of the main dais during the launch of the Building Bridges Initiative (BBI) report at Bomas of Kenya has gone viral.

In the video shared by Daily Nation, Itumbi is seen shaking hands with another person behind where Kenyatta, Deputy President William Ruto, and ODM leader Raila Odinga, among other leaders, are seated.

A security official dressed in a grey suit then approaches Itumbi and asks him to leave the main dais but he appears to resist, choosing to take the opposite direction. A few seconds later, the bodyguard is seen forcefully pushing Itumbi out of the main podium.

It is not clear why Itumbi, who identifies himself as Secretary of Digital, Innovation, and Diaspora Communications at State House, was ejected from the dais.

Taking to social media after the video went viral, Itumbi claimed his ejection was a case of mistaken identity.

“I had a beautiful moment as I left Bomas a few moments ago...with the Deputy Escort Commander, State House who kept telling me, we know you are NOT Dennis Itumbi but his brother...Hahaa! Lucky For me, a colleague saved me... all in a day's Work, a few minutes later he was clearing the road for me…” wrote Itumbi.

Thrown to the curb as you should be way over due.Uhuru needs to shake the tree a little more all those thugs who hang around him should be exposed.Look at Sonko, former governor of Kiambu,Kidero they are falling like flies Your boss arap mashamba is next hatawahi kalia hiyo kiti one Kalenjin destroyed this country we cannot afford another

If you lie down with dogs, you get up with fleas. Itumbi enjoy the company of murder suspect Jacque Maribe & drafted the letter to assassinate DP. He cannot be trusted to go near the president.

Manner-less....hovering around a photo-shot to impress his 'targets' and earn mileage and God knows what else he earns from seeming to rub shoulders with the President. Power hungry morons.

Itumbi, as they call in Queen’s english - Egg! Who does this guy think he is - you are very lucky I was not there because I would have thrown you to the smelly Nairobi river to have you do a little bit of swimming in the mud! Itumbi - you shouldn’t any where near the president; you should know better no matter how you may wish to spin the outcome of the encounter with the security guards. I’m mad the presidential guards did not finya wewe huko chini below the belt ili upate adabu!