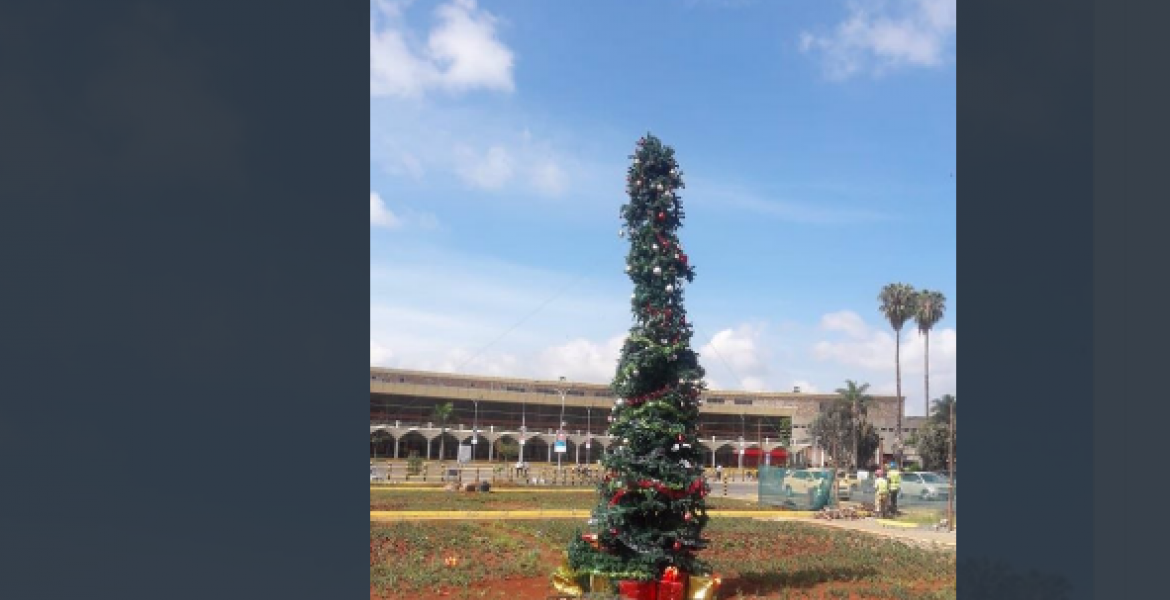 A photo of a Christmas tree placed at the Jomo Kenyatta International Airport (JKIA) became a subject of discussion among Kenyans on social media on Wednesday.

The tree, placed at the center of the airport’s parking lot, bears Christmas decorations and boxes wrapped in red and gold underneath it. Kenyans online made jokes out of the tree, saying it was poorly done. Others wondered how much the Kenya Airports Authority (KAA) spent on placing the tree at JKIA, saying it was an embarrassment to the busiest airport in East Africa.

Tony asked: “Whose uncle or Aunty has eaten the tender for JKIA Christmas tree??”

Kaberia wa Kaberia noted: “Someone to confirm how many millions have been used on this Christmas tree at JKIA!”

Duke of Gatanga said: “For an international airport, you can do better.”

Benter Owino posed: “Has someone really put up his/her greed and low standards on display at Jkia?”

@WilliamMutama noted: “For an international airport, JKIA should have been more creative with Christmas symbolism. A pine tree in the middle of what looks like a desert is rather lazy.”

@mrwainaina_wrote: “That JKIA tree is the saddest thing I’ve ever seen 😔.”

@bravoTheguy quipped: “Christmas 🎄 tree at JKIA. An international airport. The person who got the tender must be In Dubai now enjoying life. We are such a joke 🤭😂.”

@DorcasOdumbe noted: “@KenyaAirports this is a joke! How does an international airport of this stature; the door to Kenya have such a tree? This is child play. Get serious; this is embarrassing.”

You voted them; you appointed them.

You are asking for the impossible. When was a Kenyan embarrassed into doing the right thing?

What is a Christmas tree anyway in tghe African context? There isn't supposed to be one anyway!!

A true reflection of a government that has failed its citizens; emaciated economy & struggling, citizens!!!

We don't needs Christmas. It is an alien ideology.

Would be surprised to hear somebody was paid millions for that Christmas tree.