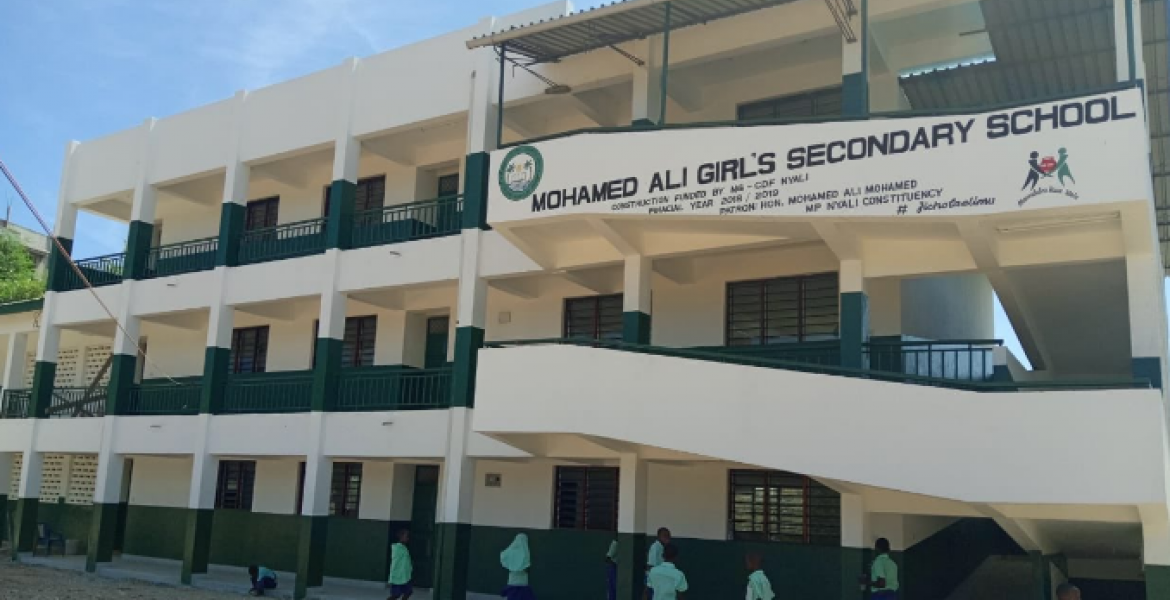 Nyali MP Mohammed Ali, alias ‘Moha Jichopevu’, is under fire from a section of Kenyans on social media for naming a new school after himself.

Ali shared photos of the soon-to-be-opened school on Twitter, saying it will be the first girls-only institution in Nyali Constituency since independence.

“The First Girls Sec School in Nyali constituency since independence opening its doors on 13th Jan 2020. #MjingaNimimi,” he captioned photos of the school.

But Kenyans online took issue with MP Ali’s decision to name the school ‘Mohammed Ali Girl’s Secondary School’, saying it was wrong since it was build using taxpayers funds.

Martin Kettienya wrote: “Maybe people should stop naming schools, Hospitals, and Roads built using public money after them. This school should have been named Nyali Girls High School. It's the first Secondary school in that area and he calls it Mohamed Ali?  Ah!”

Blogger Robert Alai advised: “You should have called it Jichopevu.”

Mnur Feruz asked: “Do you have to name the institution after you? While the school was built with our taxes?”

Keg Ambassador posed: “Was it by Ali’s money? No. Public taxes. But he had to call it Mohamed Ali Girls Secondary. Always doing what he criticized.”

Lawyer Donald Kipkorir stated: “Across ages and History, truly great and reformist leaders never left their names on any City, Street or building ... Some even left a Will that their bodies be buried in secret places so as not to be shrines ... But in Kenya, small tinpot dictators put their names on public projects.”

At least he has put up a school. And a descent one at that. It compares very well with what The former Kibra MP did there. There was a video making rounds last year showing Kithure Kindiki arriving in a helicopter somewhere in Meru to help his constituents put up a mud structure of a classroom. The constituents were cheering him btw.

Doing his job is rewarded by a salary by taxpayers not narcissism.

@kenya - I blame the electorates who cast votes for thieves like Wahome. The wooden bridge is a source of Wahome stealing the CDF money in millions.

Those who vote for her are the one who enable her to steal by initiating some shady projects.

Pretty soon you will see Wohome building some hole-dug toilets with mud walls and thatched with grass to replace the sinking similar rusty toilets.

Each toilet will cost Kshs 40M according to Wahome. And, the cycle of poverty continues in Kandara while Wohome pocket the money to get richer through corruption. Ruto is teaching her the art of stealing just right!

What is funny is Wohome will attack Uhuru more to hide her inability to service Kandara well.

What is better that fighting the war elsewhere to deflect her poor performance in Kandara?

This is Sabina Chege not Wahome.

@kenya - all politicians are the same! They saliva at the sound of stolen wealth. They are all in “get-rich-scam project). They see no evil, hear no evil and inclusively work together to hide the poor citizens.

They make heavenly promises to their electorates but have nothing to show for the grand promises! The CDF allocations have become the pocket money for all the MOs - that is the money they use to become some bonafide drunkards.

These politicians all bear the same names, “corrupt, arrogant, inept, thieves, thugs, etc!”You can call Wohome , Mrs Moha and the name will perfectly fit! They all wear a a shoe that fits the all - both men and women ( the shoe size is corruption # 15).

Right now Moha can perfectly be called Wohome, Sudi, Murkomen, Kuria, Waititu, Alice Gitau, Ruto, etc) and all those names will perfectly fit the jicho pevu priest very nicely! He has forgotten why electorates sent him to the August House to serve them!

I don't see the big issue.Should the institutions be named after the kenyatta's and the Odinga's only?