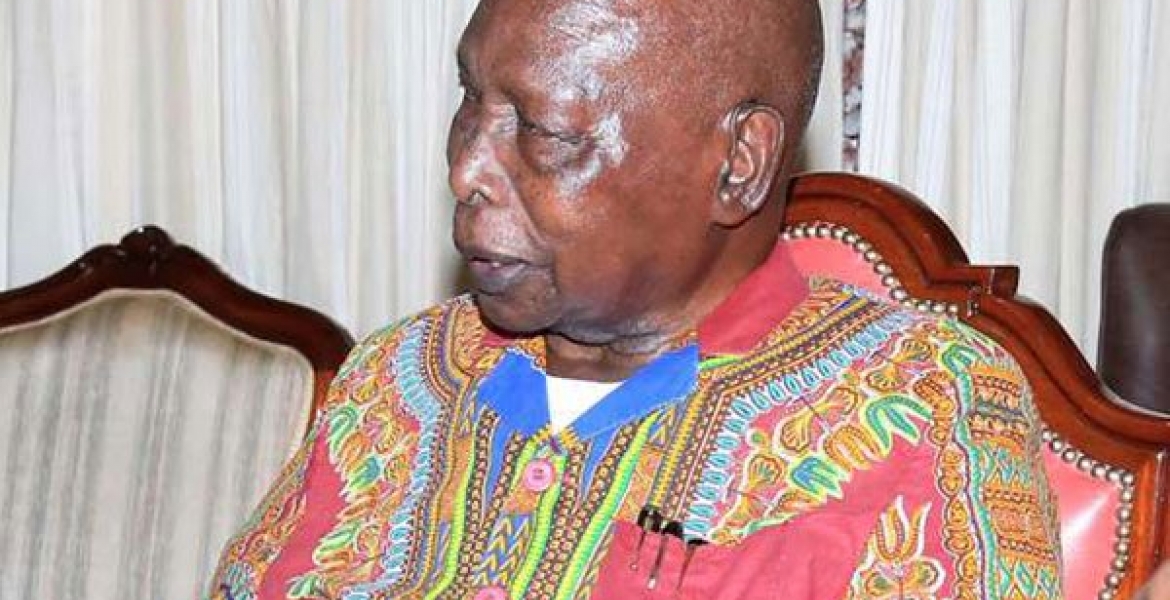 Moi was reportedly put back on life support machines last week after his health condition deteriorated soon after they were put off, The Star reported on Sunday. He is now on a complete life support system, which is helping him breathe and clean up his kidneys.

Moi, 95, was readmitted to the medical facility on November 9th last year after he allegedly developed breathing complications, according to Daily Nation. He has been under the care of a team of doctors led by his personal physician Dr. David Silverstein.

Moi was taken to Nairobi Hospital at least three times in the last four months of 2019 and has been receiving special care at the facility's VIP wing, a homely setup.

During his initial admission to the hospital, Moi was treated for pleural effusion, a medical condition where excess fluids accumulate around the lung area, according to The Star.

Let the man go in peace. Maybe Kenyans will finally forgive him for looting our country to the bones. Be at peace

This is a real player (90 full time on pitch) and now he is doing 5 extra more. He came, he enjoyed and soon he will be gone, most of his critics won’t make even two third of his playing time on field, guess what? Even on the last day he might end up sitting on the right hand side of his maker.

You just gave a new Interp for PSALM 110. And who will be his Enemies?

Not sure to how to put it...death is unavoidable. You can try to cheat to no avail. You are born, lived a good/bad life but when 6x6 awaits it is open to all no matter the life one led. Moi let it go, we are coming right behind you or before you as no one knows the time the good Lord will knock. One day we all will close those eyes and never open them again..its life. One thing I know for sure I am going directly to heaven since hell is not for me.

And how will you know you’ve reached heaven if you’ll never open your eyes again? Heaven ni wapi? GPS?

We wish him all the best as no one is perfect,he remains the most religious president in Kenya.Father may you bless us all.

DNR. Do these people know about DNR and Palliative Care?

This is monotonous! Kenyans want this to end.

Nb: The "Eye of a Need" is "The Entrance of a Gated compound" in Middle East.

@ Guest1 any idea what kind of treasures awaits the chosen ones in heaven? Could 72 virgins qualify as"treasure"Iguess...to some.

@ Guest1 any idea what kind of treasures awaits the chosen ones in heaven? Could 72 virgins qualify as"treasure"Iguess...to some.

And then the common Wanjiku will foot the bill after this killer is gone courtesy of his family friend Uhuru. Question is, will they bury him with the money he stole, land he grabbed from the widows? Absolutely not. He will be remembered as a thief, who stole the lives of youth during his time. Under his watch, the country was looted to the bare bones. Those who dared speak up were killed or detained. He remains the pioneer of tribal clashes in RV etc. Such a useless soul.

Sure, Mkikuyu .....
Your kinsman Uhuru & his thieving colleagues are worse, au sio?

@Mlachake, I doubt, though a thief is a thief is a thief. Putting it into perspective, Uhuru and his colleagues have been stealing ile chakula iko kwa shamba lakini Ruto has been looting everything including stealing and eating the baby's food thus leaving the baby hungry and crying. That to me is deadly.

It is so disgusting and that's even an understatement to see how some people are commenting on this story. Death is not an easy subject to anyone, I sont care who you are! And so to just blurt out... "hurry up & die" is simply aborrhent, heartless and nasty! Put yourself in Moi's or his family's shoes, would you be talking that way now? At least show some form of respect and if you have no remorse at all, I think you're honestly better off with your mouth shut!

Death is not an easy subject to anyone. Couldn't agree with you more. So many Kenyans died during the nyayo era. They died at Nyayo house dungeons, they died in hospitals, they died on the roads, they dies during tribal clashes. The list is endless. That was how Nyayo era was.

It is so disgusting and that's even an understatement to see how some people are commenting on this story. Death is not an easy subject to anyone, I don't care who you are! And so to just blurt out... "hurry up & die" is simply aborrhent, heartless and nasty! Put yourself in Moi's or his family's shoes, would you be talking that way now? At least show some form of respect and if you have no remorse at all, I think you're honestly better off with your mouth shut!

can u imagine ile matusi itakuwa at his funeral ... Ruto this .. Raila that ... Uhuru na BBI yake ... Kalonzo crying ... hawa maumbwa wote ... matusi tupu ... they all cant wait for moi to die and are all busy composing their matusi na mchongoano ... daimono

Moi has been a great leader for many years now it's time for him to go and meet his maker.

How does "Wanjiku and Uhuru" come up to this story? There are some tribes in Kenya that they hate Kikuyus from the bottom of their heart. That Kikuyu, is the same person who can save your life.

I am tribeless. A kikuyu by identification. ONE THING I TELL ABOUT THESE KIKUYU HATERS: MIND YOUR OWN BUSINESS, BE ENLIGHTENED, YOUR POLITICIAN LIVES A FLASHY LIFE AND DOESN'T CARE ABOUT YOU. WE ARE ALL KENYANS.

There are individuals I know who will lose jobs as soon as Mzee is gone; Gateboys: Kamket, Nick Salat, Lokorio, and others. Let Mzee go to rest!
As much as I wish to see him recover, old age has no mercy when it comes knocking, JUST GO KUKO!
The other looters will follow, the kenyattas, Muhohos, Ndegwas, Kuleis etc.
My dad once said: if you ever get wealthy, remember the poor!

Please, please,it doesn't matter what the retired President did or didn't do.At least as our elder, it's our cardinal duty responsibility to show some respect and decorum if not to Mzee himself but to his kinsmen.I wish him quick recovery and may The old man hit a 100 yrs and beyond.Wise people don't dance to the knocking of death.Let us see the glass half full not half empty.

Even if you have power one day you will left.Think of moi