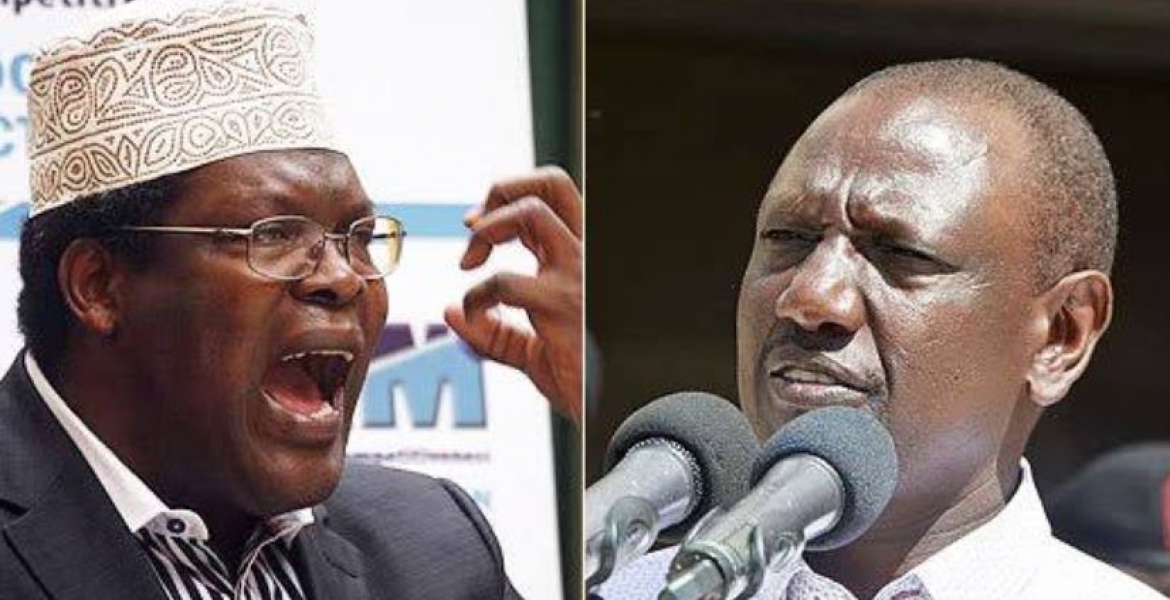 Speaking on Sunday, DP Ruto warned public officers disobeying court orders that they would be held personally responsible for their actions.

“This country is built on a firm foundation of the rule of law and as such, every citizen, including all public officers, must respect it...those disobeying will carry their own cross,” Ruto, who spoke in Narok, said.

Responding to Ruto through Twitter on Monday, Miguna asked the Deputy President to address President Kenyatta directly on the matter instead of blaming his juniors. Miguna has been accusing the government of disobeying court orders requiring it to facilitate his return to Kenya following his deportation to Canada in 2018.

“To William Ruto: Make a decision whether you support the Rule of Law and the Obedience of all Court Orders or you don’t. Stop blaming CJ David Maraga. Maraga does not head the @PoliceKE. The person DISOBEYING Court Orders is your “boss” Despot Uhuru Kenyatta. Address him DIRECTLY,” Miguna wrote.

Ruto made the remarks after Gatundu South MP Moses Kuria was detained at Kilimani Police station for over 24 hours despite court orders to release him. Kuria, an ally of Ruto, had been arrested on Friday morning over allegations of assaulting a woman.

Miguna, who was set to arrive in the country last Tuesday, is stuck in Germany after airlines refused to fly him to Nairobi over a red alter issued by the government of Kenya. The alert allegedly warned the airlines against flying Miguna to Kenya or any other African nation.

@miguna - the court orders are being ignored simply because they are compromised by the judiciary itself and some politicians.

The judges issuing them have some questionable moral conscience and poor character. Most of these judges have corruption cases against them. How are you to issue a court order when the judge has black spots all over his record?

They issue out court orders to have lunatics like you allowed back in the country to cause anarchy, chaos and unnecessary mayhem to the smooth order of things. Kenyans do not owe you anything! It is about time you start behaving like a normal human being!

DP Ruto is just talking about court orders simply because a criminal friend in the name of Kuria was in jail. Kuria should have been kept in jail for beating a woman. What kind of picture is Kuria showing to young boys??

The judge who issued the court order to release Kuria or to have Miguna return to Kenya is misguided and ought to be fired.

Miguna: I am sorry for your predicament. However, you have a running mouth that spews very bad language. Whenever you make a point, however good, it gets lost in your filthy way of speech. That’s why people resent you. At your age and with your education and long experience, you should know better. If I read you well, your anger, need to malign others, ego and vengeance have been your undoing. Why not address your issues soberly? Arrogance does not pay. So much for one day. Enjoy your stay wherever you are.

@kamande - the saying that empty vessels (ndebe) make the most noise is directly synonymous with Miguna! He could have quietly returned to a Kenya, but he couldnt help himself because he has to announce his every move he make to feel important. And beyond that he talks some toxic filthy carcass! Let him enjoy his damn founded foolishness wherever he is currently located. Huyu Ana Bweka bweka huko Germany Kama a lost German Shepherd dog!!