My Life is in Danger for Criticizing Uhuru, MP Alice Wahome Claims 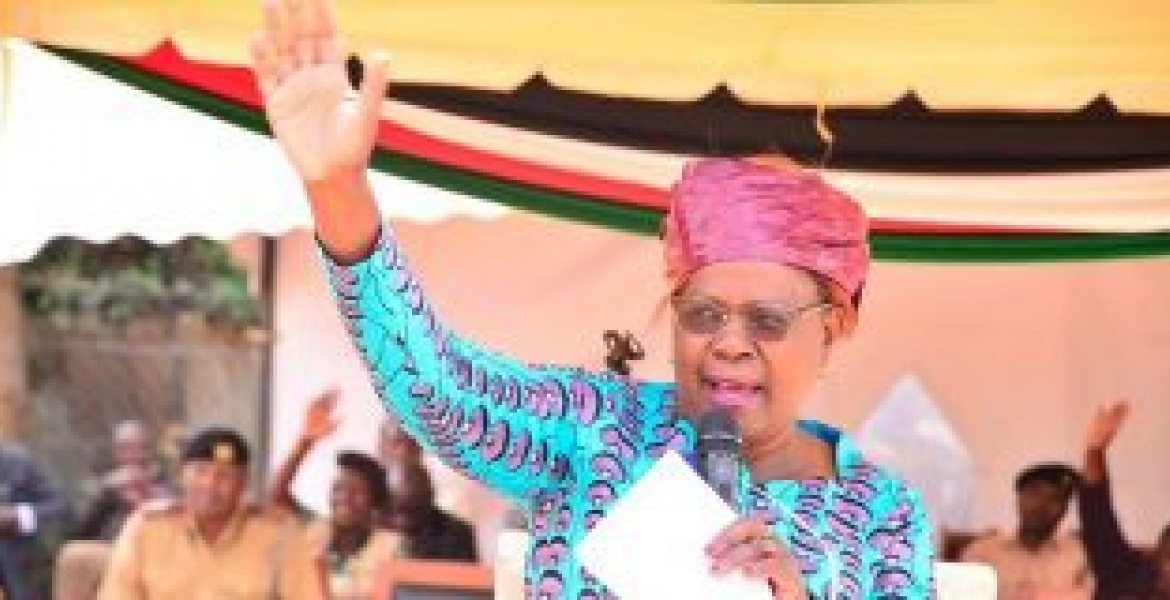 Kandara Member of Parliament Alice Wahome claims that her life is in danger after she received death threats for allegedly criticizing President Kenyatta.

Speaking in Murang’a on Wednesday, Wahome claimed that a section of leaders allied to Kenyatta were plotting to eliminate her after she accused the president of being a threat to Kenya’s economy and democracy two weeks ago. She alleged that she received a call from an unidentified person, who threatened to kill her.

“A man called me last week and threatened to kill me. Some leaders allied to Kieleweke are after my life and, should my constituents fail to locate me, they should be interrogated over my whereabouts,” Wahome said.

She also accused the same leaders of hiring youth to disrupt her meeting in Kandara town on Wednesday.

“They had sent goons to try and interrupt my event of issuing bursary cheques but our intelligence recognized them and we called police who arrested 22 of them.”

“Let them know that I will not be cowed or intimidated by their evil schemes. Let them also know that I am guarded and we shall face each other,” she stated.

On January 2nd, Wahome alleged that the Building Bridges Initiative (BBI) was a scheme by both Kenyatta and ODM leader Raila Odinga to extend their stay in power after the 2022 elections.

“The biggest existential threat to Kenya’s declining economy, democracy, and freedom of expression, political affiliation and growth is Uhuru Kenyatta because he is on the driver’s seat,” she claimed.

“Raila Odinga is his new political mercenary for hire, and the BBI report is the special-purpose vehicle heading to the route that has been suggested by Murathe, Atwoli and Beth Mugo,” she added.

Carry your own cross. You will die one day and be forgotten. No one has time for your nonsense

@wahome - it is very strange for a very junior MP if your unmentionable caliber to make unfounded claims that someone wants to kill her. Who really wants to kill a poorly performing AWOL MP?

I take it that Kandara electorates are very tired of you wasting some valuable time TangaTanga-ring without doing your job of developing the constituency and now they want to beat you her up! They just want to shake you a little bit to wake you up from the slumber.

Don’t worry Wahome - Wacucu, Matheri and Wanugu are already dead if you are afraid they will come for you. Probably their rotten demons are beginning to chastise your raw spirits.

It sounds like Wahome’s demons are stirring the sic in her head to a point she begins to hallucinate in a broad day light. She knows she is just creating crazy side shows to shield her failure as an MP.

Uhuru really cares less about the insults you have hauled at him as a parrot (Ruto’s proxy) used by the high prince of corruption so you can share with him the Kshs 21 billion stolen from the dams.

It is quite sad for Kandara electorates to vote in a morally corrupt MP and materially poor MP who seems to carry herself with some high headed arrogance, while intoxicated with the power given to her by the people of Kandara.

Wohome - Kandara people voted for you to represent their interests in parliament! Period!! So, stop holding campaigns Tanga Tanga across the country while those who elected you do not have a single dispensary to get medical treatment in Kandara.

It is quite sad that Uhuru has to remind you that 2020 is a year of work; where you need to prioritize on getting the people’s job done instead of moving from Kandara to Mugotio running your mouth like a mad woman.

I don’t know what kind of dirty water you drunk at kabi Kuku to think that any one wants to kill you! Stop lying that a woman with a deep voice call you on your cell phone to threaten you with death. It is all about you, yourself and you! Stop the nonsense!

And while at it Wohome, use the CDF money wisely to build some permanent bridges, tarmac roads, toilets, etc!

And try to beautify Njiri’s High School so that the pupils (your daughters sons) can be proud of their academic institution of higher learning! At that point they will know the their grandmother is proud of them!

Oh my. This woman must have tickled you the wrong side. I really supported what she said. We cry development, what is the need to build a dual carriage highway in muranga as Sabina was requesting. Man something's are just a mere waste of resources. How many cars pass through muranga to thika kenol, and how often do you see traffic jam in that road. What we ought to be asking I guess is quality constructed roads unlike the potholes in 2 year old roads in some areas and congestion problems solved. This roads were better off before the tarmac, to be exact that installed tarmac is 2 steps behind to me but to others its development but they don't realise cars are wasting a lot of time trying to avoid those holes. I don't think Njiiris need any help. It's just beyond its glory days if they were real in the 90s and is in kigumo.

@kiihu - aren’t you sick and tired of cry babies in the name of politicians who think they are God’s gift to humanity and are not accountable to the electorates?

Can you see through the lies this woman is passing across the country while she has completely failed in Kandara? She is taking Kandara people for plain fools!

These kind of existential thugs are a severe threat to the wellbeing of Kenya, and have to be called out when they tell obvious lies!

@wohome - seriously you got eyes but you can’t even see! You are the mtu wa mkono for Uhuru to develop Kandara so that the nation can shine. Tell the people what you did with the CDF allocations! Or you want to tell us that CDF money is all for your big Tammy?

As a matter of fact you are the driver to the economic development bus! Stop driving the bus into the Mugotio ditch and then you start blaming Uhuru for lacking good driving skills.

Don’t you feel ashamed of everything negative that comes out your filthy mouth!? It ain’t good to insult a woman but you are behaving like a very hungry dog.

If you could stop stealing the CDF cash and put the money to good use, the constituency will develop and the domino effect of what you do in Kandara plus the work of the other MPs across the country will brighten Kenya’s economy. Where did you go to school? Please don’t tell me you have a law degree! Please don’t!

No wonder some demons in your head are making you talk like a mad mama - kimundu muguruki for that matter.

2020 is the year of perfect vision for the people of Kandara and Kenya as a whole. What positive thing do you plan to contribute to the country instead acting foolish in 2020?

People are tired of your farting boom in the market place while you are doing absolutely nothing to contribute to their wellbeing! Can you shut your mouth for once and do something tangible (something people can see and touch!)?

Things are going much better in Nyandarua county since your counterpart (Gitau) shut her mouth, stopped Tanga Tanga-ring and got to work for the people!

Please do us a favor by emulating Gitau and the fake madness of people wanting to kill you will disappear! It is all in your “SMALL” head! You ain’t worth much if you can not produce for the people. It is not all about you and your misguided ego!

Get to work! Stop talking and listen! Will you?

Welcome back to kenyas dark and primitive days. When you think we made a stride we backslide five. Surely tugutura thutha ta mutong'oe all we think about is mbecha while we pretend to be supportive of nyumba ya mumbi. Truth hits the core and it hurts.I really supported what she said.

@kiihu - it is those creating constant side shows that are taking Kenya to the dogs! They want to deceive you that they are the agents of better change while they are bankrupting our country by eating away the bedrock of our economic foundation. The farmers deeply suffered at his watch.

@Mongrel - the rules of the jungle seems to apply when Wahome and her Tanga Tanga nonsensical team keep on stealing every thing that lands in their dirty hands - CDF, money allocated for viable projects, expensive roads build of soil dirt and costing arms and legs, bridges made of wood then get swept by floods, etc. That is why campaign never stopped in 2917/18 because they want their head- Han hi to be president so they can continue to still.

Girago said Kenya will be like Somolia if Ruto were elected president! Having been to Sudan and Somalia, I surrender don’t want Kenya under Ruto to look anything close to those forsaken countries! Do you? Wake up boy!

Just ask Kiunjuri where the shs 2 billion plus he paid to ghost monkeys is today? Where did the money go? I hope he will be asked to pay it back as he moves on!

Just ask yourself who wants to kill a lazy bustard MP, who is talking all kind of madness to shield her theft from simple minded Mongrel across Kenya?

Who really want to kill a good for nothing MP who is just raising hell so that she is not asked to account for the lost CDF money?

Wohome is the one killing herself way deep in her “big” head to deflect the real issues! Kandara just failed the budget audit really bad. She know she is heading to Kamiti just like Sonko and Waititu! We should jail all of them for stealing our hard earned tax money!

This woman ain’t no the late JM Kariuki, Matiba, Jean Marie Seroney, Chelagat Mutai, Robert Auko for anyone to want to kill her.

It is script she is learning from her master, the high prince of corruption who has a golden hen which lays 3,000,000 eggs every day. A good cover up for @shs 21 billion stolen through Rotich from Treasury! Don’t be fooled! It is time to call these thugs out; yes the gangsters who are destroying our economy, the future of our children, and most of all our beloved country!!

Get your own security, that's what every common Kenyan do. Seems like she's confusing activism with criticism.

... a Quote I read somewhere... 'the quilty are always afraid, even when nobody is chasing them!'