"He Gave Me My First Phone," Esther Passaris Speaks on Her Special Relationship with Moi 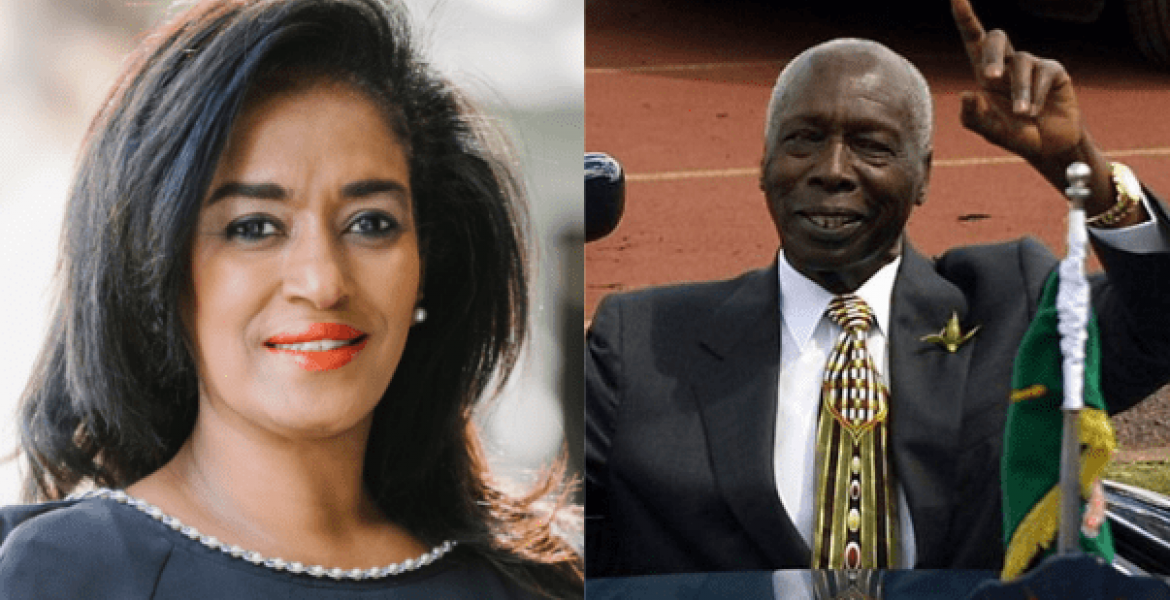 Nairobi Woman Representative Esther Passaris has for the first time opened up about her relationship with the late former president Daniel Arap Moi.

Speaking after she viewed the body of Moi at Parliament buildings on Saturday morning, Passaris disclosed that she had a close and personal relationship with the deceased. Passaris said she received her first mobile phone from Kenya’s second president, describing him as a pleasant man.

Passaris said she met Moi in 1997 and he awarded her a tender to supply campaign t-shirts and then directed one of his aides to give her a mobile phone to facilitate communication.

“I got my first mobile phone from him in 1997. In 1997 I was running a promotional company doing t-shirts and I got a tender to supply campaign t-shirts for the elections… It was a Motorola… really big. It looked like a walkie talkie and he said to Lukorio who worked at State House give her a mobile phone,” said Passaris.

She further revealed that it was Moi who personally intervened after half of her money was delayed after supplying the t-shirts. She said the amount, which she says was between Sh4 to Sh5 million, was released immediately.

She also noted that Moi personally called her to express his condolence after she lost her pregnancy. “I also lost my pregnancy at that time. He called me personally and said sorry. They had also held my money they didn’t pay me and he got to hear about it and he called me and got hold of Joshua Kulei and told him to pay her,” said Passaris adding that Moi personally invited her to his inauguration after winning the 1997 election.

“He invited me to his inauguration and he asked me who I want to bring and I said my mother and he said fine to give her an invitation. He was a quite hands-on, very pleasant person.”

“I feel sad that I never got to see him in recent years but I kept in touch with Gideon to always find out how he was doing. He was always in my prayers,” said Passaris.

Passaris. Why didn't You at least go to Moi's inauguration with the Father of the Baby you miscarried? I smell Moi-Passaris ROMANCE😇👼here.

It sounded like it was Mois baby I am not sure either. Sounds like she started using her looks long time ago and that in turn got her into tenderprenuership and to parliament. As @Sukari has stated below, sounds like Miguna was right. Miguna should be allowed back in Kenya to talk more truth!

That's stupidity. Moi is on Passaris and people ate being tortured by the same regime.

The more she opens her mouth, the more she validates Miguna's analysis of her in that infamous Jeff Koinange's interview!

So what’s the relevance ? Do you still have the phone ama what should we ?

Was it really necessary to disclose this Esther?

Ai Moi hangewacha kitu yellow yellow impite hivyo. Whose baby was that? Maswali mengi. If you were one of his concubines, kama ulionja hiyo mboo sema tu, wazi wazi. Passaris has been knkwn to sleep with young men and stealing their project ideas including adopt-a-light. Cheza na watu wanajua kutumia vitu ziko kati kati ya miguu yao. WE!

Passaris - every human being must learn the good character of working for things you acquire along the winding journey of life!

The appetite for free things only leads you to a wholistic material dependency life as you continue to expect more “free” things to come your way without cutting a sweat.

Your state of mental attitude is exactly what needs to change for Kenyans to move forward. This kind of enslaving mentality is what have caused uncontrollable levels of corruption and theft of coffers go on for so long.

It just sounds quite pathetic for “a Passaris” to talk about “gave me this, gave me that!” At what cost did Moi give you the phone????!

Unfortunately, the idea of a free lunch is so deeply ingrained in Kenya, it has led to the notion of our turn to eat. MPs no longer even pretend to serve the people believing raises are their due, the chief justice is more concerned with status and recognition, corruption and self dealing is the main product of all three branches. There really should have been an open airing of the injustices and law breaking of the past 56 years with the principals explaining their actions. This baba wa taifa crap is just that. My father never killed any of his children and fed, housed, educated and clothed us- that is what fathers do,yet we lionize these murderous presidents for holding harambees and giving away the stolen money or giving kids two packets of milk a week.

Not everything is corruption! Humans are naturally born with all senses including affection and love. Being president does not mean that you loose these naturally gifted qualities. If Pasaris told you today, as a consenting adult that Moi or herself had some love or affections towards each other, what the heck are you gonna say? Corruption?. Give us a break!

It is not about love, affection and two grown ups engaging in consensual sex - actually, I wonder why Passaris is now talking about a secret sexual affair with Moi, while Moi is not here to confirm it!

The problem comes in when Passaris started talking about “a free phone” and T-shirts contracts awarded to her for bedding with Moi, at the expense of hard working tax payers.

It is very clear that Moi did not buy the phone to gift to Passaris - it was the tax payers money that was misused, plus costly contracts that no one have ever heard about before. I doubt if any other woman would have been awarded the T-shirt contract without consenting to be sexually used.

Is there much difference between Moi/Passaris T-shirt contract and that of Jirango/DP-Ruto T-shirt contract? Both contracts involved embezzling public funds - Ruto plainly stole tax payers money, while Passaris did the same by using romance as an added advantage into negotiating contracts - which all amounted to corruption in high places! Who knows if the “contracts” were initiated as means to pay back Passaris sexual favors!

If this is our way of fighting corruption, we will be doomed.
The tshirts in question was not a government project but party project. Kanu honchos could appoint anyone of their like to print anything campaign! Whatever Passaris says today about any affair is not a debatable issue. What she says remains in history as part of the things that happened.. Just because we are learning it now does not mean it didn’t happen. A private affair which both parties are entitled to. Same thing with JIrongo and Ruto. They did work and in your case for Kanu and whatever arrangements they made was upto the party officials with their money and favor.
Kanu like the other parties raised their own money to be used for all and other reasons to make themselves competitive and popular.
A private affair within two consenting adults is neither corrupt nor illegal.

The air is so heavy around that narration ...something just ain't right. We all know how EmOone was with women... especially those who wanted to "become" and to be 'seen'. Silence is golden.... Yes, MM might be a good judge after all.

As long as we are confessing, he gave me the vision to see that kufuata nyayo blindly sii kitu kizuri especially if those footsteps belonged to an old decrepit, corrupt, murderous land grabber and his equally venal, murdeous henchmen

So pasaris remembers the phone while most of us He gave us milk long Before the phones were invented. And as kids we were grateful. Just remember the attendance on Tuesdays and Thursdays when milk was being offered.

Oh Lordy, I bet she will wish she never spoke out. She should take a leaf Kasauli, the queen of dignity!

The tyrant wanted to taste the sweet honey 🍯 hole 🕳