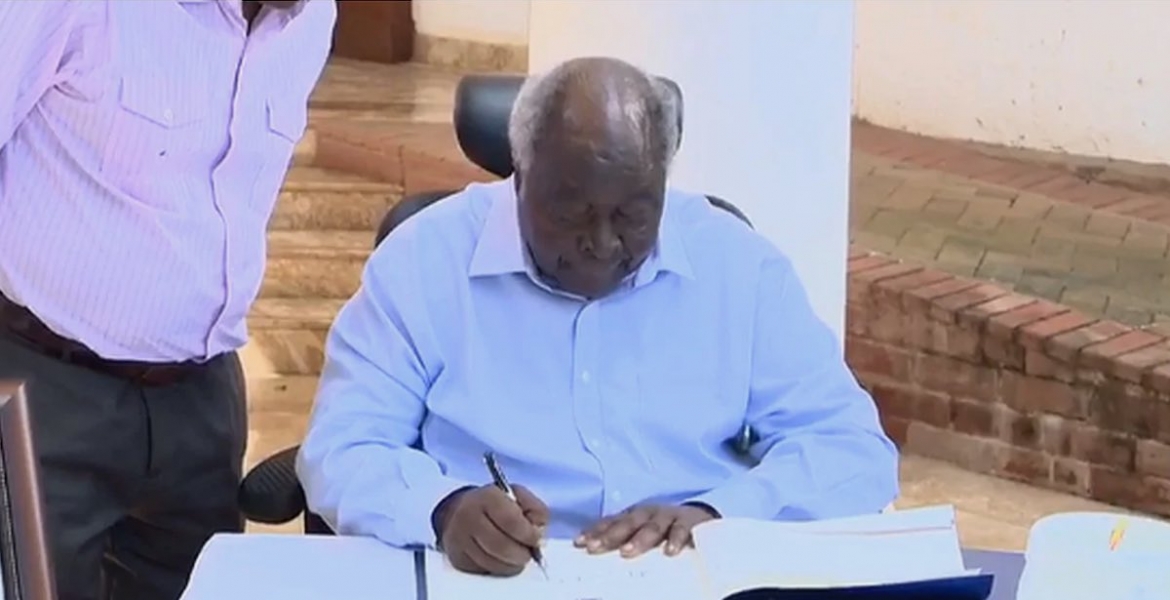 The latest photo of retired president Mwai Kibaki, who has not been seen in public in the recent years, has emerged.

The photo was shared on Saturday, February 8th by The Standard, which reported that Kibaki, who served as Kenya’s third president, signed his predecessor Daniel Arap Moi’s condolence book.

"Former President Mwai Kibaki pays tribute to the late former President Daniel Arap Moi by signing his condolence book today," The Standard captioned the image without mentioning where it was captured.

In a message of condolence on Tuesday, Kibaki praised Moi for his legendary mastery at thwarting crises, adding that his ability to assert state authority saved Kenya from undergoing disruptions and long periods of civil unrest witnessed in other African nations.

“I have known Mzee Moi for decades and have worked with him for many years. I, therefore, have personal and nostalgic memories of Mzee Moi accruing from shared national platforms and responsibilities,” said Kibaki.

“Over time, I have had a chance to appreciate the best of Mzee Moi’s statesmanship and skillfulness in the conduct of statecraft both during the blissful and tumultuous moments that Kenya has traversed.”

“With time, his mastery at thwarting crises became legendary as was his ability to assert state authority. That is largely how Kenya stabilized as a number of countries in the region and continent suffered disruptions and long periods of civil unrest.”

Moi died on Tuesday at the Nairobi Hospital and will be laid to rest in a state funeral next month.

Kibaki, who succeeded Moi in 2002 and retired in 2013, has not appeared in public since the burial of the late Nyeri Governor Nderitu Gachagua on March 6th, 2017. Kibaki celebrated his 88th birthday last November.

@kenya - politics eat you up if you intend to do good for the people! That is what Kibaki did during his time as the president!

He inherited a dying country - economically, rotten infrastructures, dying institutions, and everything was comfortably on the death bed. Rebuilding everything KENYA back together wasn’t a cup of tea.

With so many mafi ya Kuku, and kubafu on the way; it made KIBAKI look ugly and aged! And let alone just having to publicly curse the idiots as he diligently worked to make Kenya a proud country once again!

Baba Jimmy will be well remembered some day!

Let’s be clear: Kenya is STABLE because of Kenyans not because of serial killers hiding in government.

Saying >>With time, his mastery at thwarting crises became legendary<<<He was inhumane , he brutalized , maimed and killed people because that’s what he wanted to do.

Moi did not have to kill people to stabilize kenya, he killed them because he was a killer.

Kenya media, the politicians (Moi the killer enablers) are lying by saying to get peace in Kenya, you have to kill People (Kenyans).

Moi was not very educated and he killed because he could not accept there other Kenyans way smarter than him and all the Kalenjins combined.

@guest - the other day you said Moi was the “Professor of Kenya politics!” Did you mean to say he was a professor of politics of massive fear, use and dump, and personal destruction of those he feared!?

Or, what caused you to have a change of ❤️!?