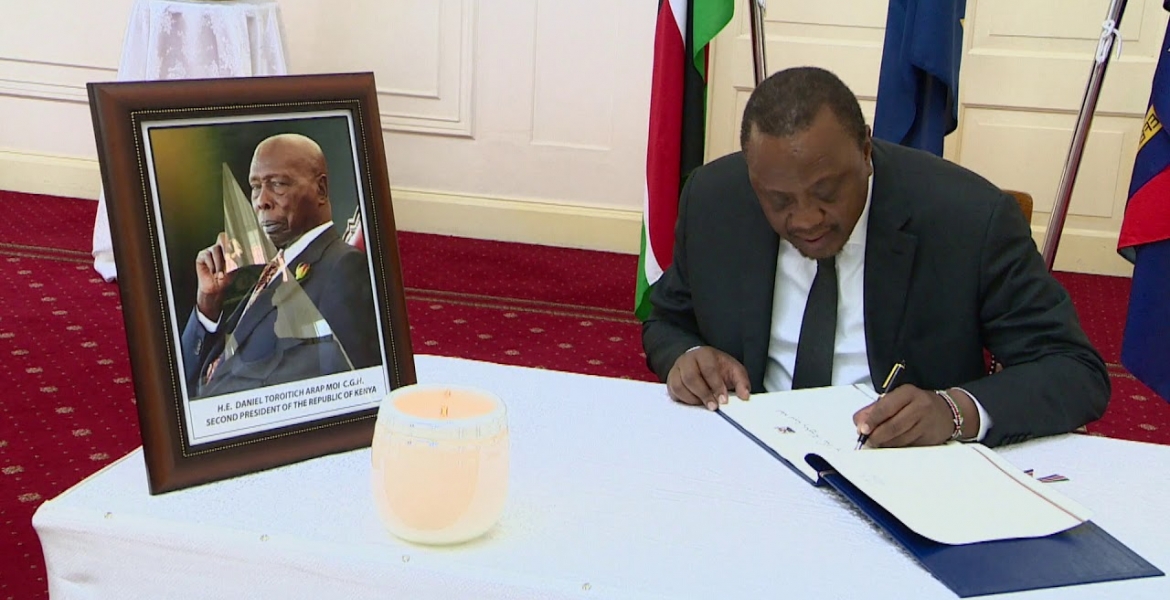 Kenyatta, who returned to the country from a trip to the US on Friday, described Moi as a great son of Kenya, a cherished brother, a loving father, a mentor to many, a father of the nation and a champion of Pan-Africanism.

“The sun has set on a truly extraordinary man. A masterful yet thoughtful leader. A suave yet firm diplomat. One who served the nation with dignity and honor. One whose wisdom and diplomatic finesse kept Kenya, both relevant and neutral, even as the whole world was in the grips of the Cold War,” said Kenyatta.

On Saturday morning, Uhuru led Kenyans in viewing the body of Moi at Parliament buildings, where it is lying in state for three days ahead of his state funeral next Wednesday.

Below is Uhuru’s full tribute to Moi, his political mentor, and Kenya’s second president.

It is with a heavy heart and a profound sense of personal loss that I make this tribute, in honor of the life of President Daniel Toroitich Arap Moi, who rested on the early hours of Tuesday, February 4, 2020.

Today, as the solemn procession of the late President Moi proceeds through the streets of our Nation’s capital, to lie-in-state at Parliament buildings; we commence the final journey of a great son of Kenya, a cherished brother, a loving father, a mentor to many, a father of our nation, a champion of Pan-Africanism, and the Second President of the Republic of Kenya.

The question that we all should ask ourselves is: “How does one mourn an iconic leader?” A leader who spent almost his entire life in service to our nation, whose story of heroism, sacrifice, and service, began in the pre-independence era.

How is a man who achieved so much more than is expected in a lifetime - be celebrated?

What would be a befitting send-off or national honor for a man who built Kenya, in large part by the works of his hands?

A man who, together with other iconic leaders, helped Shepherd our Country out of the shackles of Colonial Rule; and into the Freedom and Self Determination of our modern independent State.

How else can a grateful Nation celebrate the life of a man whose calm and steady hand reassured a young Nation and her Allies, during the peaceful transition into the Second Administration?

The sun has set on a truly extraordinary man.

A masterful yet thoughtful leader.

A suave yet firm Diplomat.

One who served the nation with dignity and honor.

One whose wisdom and diplomatic finesse kept Kenya, both relevant and neutral, even as the whole world was in the grips of the Cold War.

“A passing cloud” that served with distinction for 24 years. A decisive and courageous Commander-in-Chief of formidable achievements, who chose well and always put the country first.

A balanced leader who during the clamor for multipartisym, on listening to both sides - chose well, setting the stage for national rebirth through the reintroduction of multiparty politics.

A tactful leader, who during the quest for a new constitutional order, listened and quietly chose what was best for the country.

A visionary leader who, in 2002, when his party – and, I as their candidate - lost the Presidential election, left office with a gracious last word of advice to those who, thereafter, took up the heavy responsibilities he had borne for a quarter of a century.

Today, we to celebrate the life of a patriot who wherever in Kenya he found himself, he would calm fears and raise the hopes of everyone who heard him.

No part of Kenya was strange to him, and nor were her citizens. Deep in his D.N.A, he understood and prized our culture and national character.

To his last day in office as President, he remained committed and ready to defend Africa and her people. He believed, deeply, that we had the answers to the questions that troubled our continent.

Our Nation is not alone in mourning the passing of President Daniel Toroitich Arap Moi. The whole of Africa is mourning with us. We continue to receive messages of sympathy and admiration for the life and service of Mzee Moi from around the world.

We celebrate the life of a teacher for life and a mentor to many - myself included. One whose ingenuity bequeath our Nation many projects.

President Moi was a mortal man, whose works and legacy are immortal. The Republic of Kenya, the community of East Africa and the great continent of Africa, bears his indelible mark, which, I am convinced, will endure long into the future.

May Mzee Moi’s memory live as long as our Republic endures; and may we, to whom he has left the care of the Republic, prove ourselves worthy of his bequest.

We commit Mzee Moi’s Soul to the Almighty God, thanking the Creator for sending to us His Servant, whom after nearly a century of selfless and steadfast service, now rests in His Glory and his well-deserved reward.

God bless you and our beloved Nation- Kenya.

First , any STABILITY in Kenya is because of Kenyans.

Not Moi or a looting n murderous political class.

Let it be known.

This is why if any country wants to defeat Al shabab or any criminal organization they should talk to Kenyans not looting opportunistic politicians and genocidial maniacs hiding behind tribalism.

The political class in Kenya and the international community refuse to acknowledge that the political stability in Kenya is because of those of us who come from small tribes and know how to co-exist with other tribes.

Giving credit to serial killers, land-grabbers and looters credit for stability that Kenyans have brought to kenya is the reason those fighting terrorism among other things will be fighting for another 100 years.