Uhuru Drives Himself to Nyayo Stadium in Nairobi 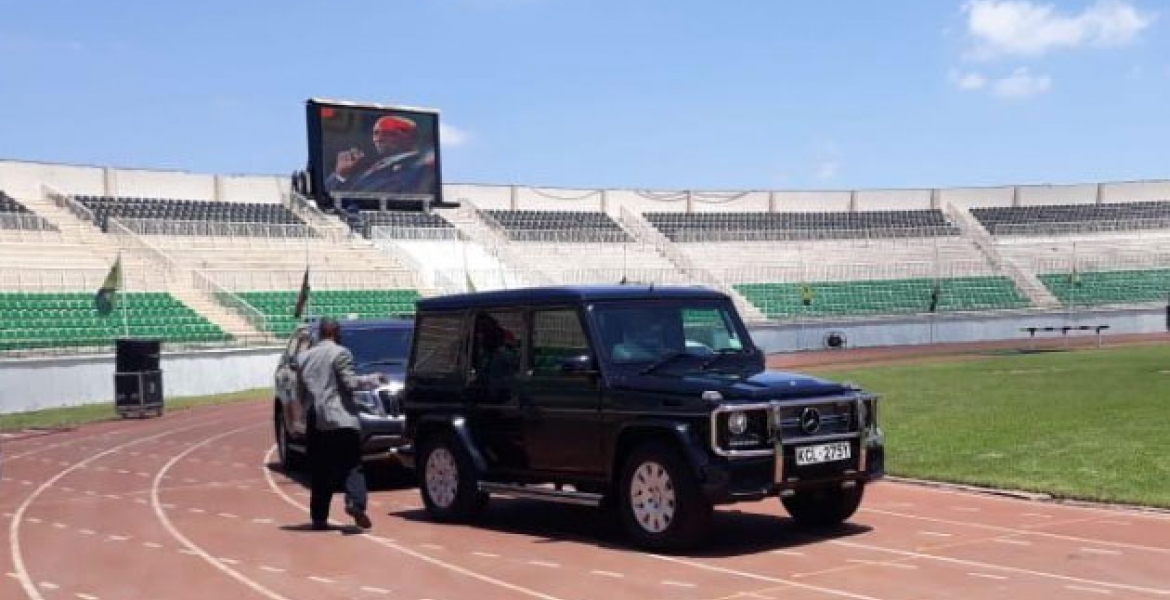 President Kenyatta on Sunday morning made an impromptu visit to Nyayo Stadium in Nairobi, where preparations for late president Daniel Arap Moi’s funeral are taking place.

Kenyatta drove himself to the stadium in a Mercedes Benz GWagon and inspected the ongoing preparations for the memorial service of Moi, according to media reports. He arrived only in two vehicles and a few bodyguards.

The memorial service is scheduled for Tuesday, February 11th, ahead of his state burial in Kabarak, Nakuru County the following day.

Moi, who served as Kenya’s second president for 24 years, passed away at the Nairobi Hospital last Tuesday after a long illness.

On Saturday, Kenyatta paid glowing tribute to Moi, describing him as a great son of Kenya, a cherished brother, a loving father, a mentor to many, a father of the nation and a champion of Pan-Africanism.

“The sun has set on a truly extraordinary man. A masterful yet thoughtful leader. A suave yet firm diplomat. One who served the nation with dignity and honor. One whose wisdom and diplomatic finesse kept Kenya, both relevant and neutral, even as the whole world was in the grips of the Cold War,” said Kenyatta.

“President Moi was a mentor to many, including myself.”

Go and inspect hospitals in Nairobi start with Pumwani.Nairobi women’s hospital was just dropped by NHIF find out what is going on.Your hands on approach may have come a little too late the stadium was built to host sporting events not to belittle state funerals however parading around in your gwagon while in Kibera some walk because they cannot afford bus fare is mere vanity.

Very true @guest. Let us take care of the living and not the dead especially those who did nothing but imporverish the poor when they were alive. Uhuru is just taking care of the three dynasties.

Go and inspect hospitals in Nairobi start with Pumwani.Nairobi women’s hospital was just dropped by NHIF find out what is going on.
This comment to my opinion should be directed to the MP'S and MCA's for the area involved, we also have ministries that it's their job to keep up with hospitals. If the President has to do it all, then we do not need Senators, MP'S and MCA'S.

He sets the direction. that is why he is there. When he does not have priorities then no one will.

It has just become that bad to a point Uhuru has to inspect everything himself because the subordinates have no crue what they are doing. Bitten once, twice shy!!

Good job Ngina's son! drive around every day to so many projects in Kenya, that are being run by competent people who instead, just ask for bribes for anything...thus tarnishing your good name.

Cut the presidents some slack people.. the man is mourning his father!