Uhuru Told Me He Won't Support Ruto in 2022, Waiguru Says 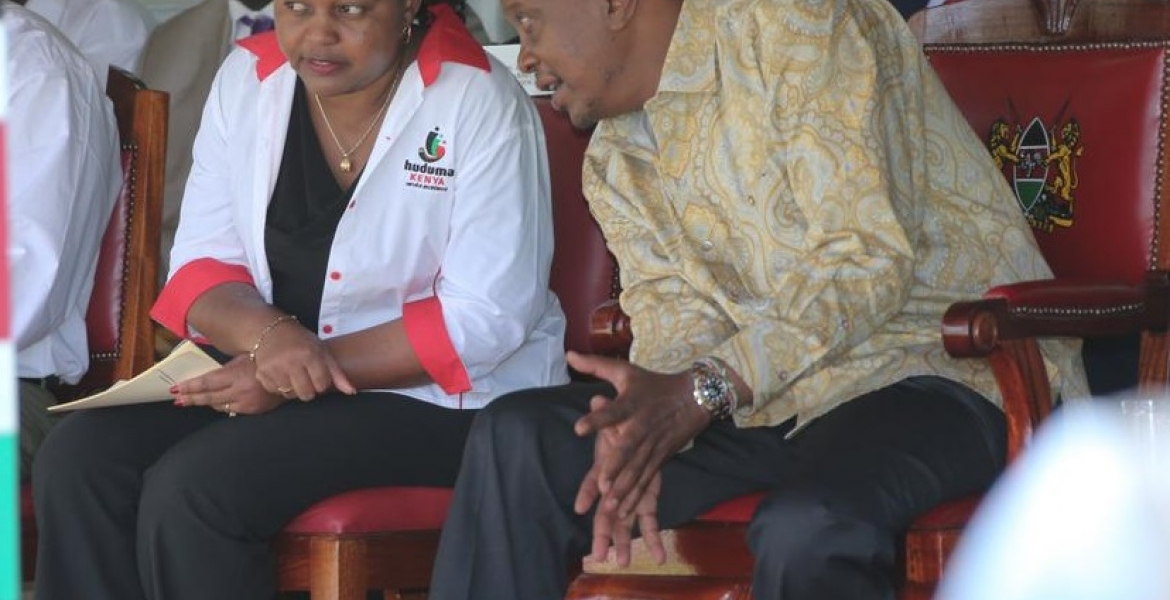 President Kenyatta confided in me that he will not support Deputy President William Ruto in 2022, Kirinyaga Governor Anne Waiguru has said.

Waiguru, who spoke on Thursday during a BBI validation meeting at Maya Hotel in Sagana, Kirinyaga County, said Kenyatta told her he had withdrawn his support for Ruto’s presidential bid because he was undermining and defying him.

“Ever since the deputy president launched early presidential campaigns after the 2017 general election, the president told me that he felt undermined. The directive he issued to Ruto to stop early campaigns, fell on deaf ears,” said Waiguru, who spoke in Kikuyu.

She further accused DP Ruto of hiring a section of Mt Kenya leaders to conduct an anti-Uhuru campaign in the region.

“Every weekend, we see MPs from Mt Kenya traversing the Central Kenya counties trying to discredit the president; they want to make him lose popularity on the ground.”

“This, and other deeds by the DP and his team, have made President Kenyatta renege on the promise he had made in the lead-up to 2017 general election that he (Uhuru) will complete his 10-year term and hand over the leadership baton to Ruto to also steer the country for a decade. The president recently told some of his close friends that he won’t honor that pledge because Ruto has openly disregarded him,” added Waiguru.

At the same time, Waiguru said she was ready to back ODM leader Raila Odinga as Kenyatta’s successor, saying that he has demonstrated that he has the interest of Kenyans at heart.

“Odinga, through the handshake initiative, joined the president in uniting the nation. And, because he (Odinga) has shown that he has the interest of Kenyans at heart, I wouldn’t mind his presidency,” said Waiguru.

When did he or where that is the question? Pillow talk perhaps :-)

Bingo! In fact she wouldn't have Spilled the Beans if she hadn't gone Seperate ways and Settled with the other guy.

Waiguru is a thief.
She should be arrested.

Its hard to know who she is married to sometimes. She may have more than one.

Pwoot! Him & his sidekick aka NYS thief planning the next place to scoop and run,"Si niriikuabia tumwekelee yule shenzi Ngarita"
Will talk about the other KAZI...???

Everything Waiguru said have been known for a long time.It is not a secret unless you all live in Mars! Every sign is written on the wall that Ruto is just an unwanted guest among VIP guests.

Ruto is the only one who is still holding on straws in a very fast moving river. There is no love left between Uhuru and Ruto!! Ruto is more of an expendable nuisance to Uhuru at the present time!

The political marriage completely broke down the day Uhuru took to the podium back in 2018 to announce part of the cabinet members.

So you have stayed in contact with him? That photo of you, him and the husband looked suspicious.

Waiguru ithuiii agikuyu tutingithuura kana tutingiathwo ni ihii.Rao is cooked.Waiguru trust me u will b one time gavana.Kirinyaga will finish you 2023 n u can take that to the bank.Huyo mganga have caused kenya enough troubles n we will send him to lake victoria to fish by 8am

@halisi - the muganga you are supporting is the biggest conman ever known around the world in 80 days! But you are well justified to support a bonafide thief as that rings the bell inside your Aorta vein!

You will sell your soul to deliberately destroy the whole country for a stolen shilling!; you included! And, that is who you are!! A Greedy son of a B$tch!

@tepiyebei shame on you for bringing an innocent mother in the converstion. how dare you how would you feel if we insulted your mum. we all have right to express ourselves am surprised mwakilishi permits us to use vulgar language how unfortunate

When uhuru was pouring out his heart to you did you tell him where the NYS loot is
.A young man is now a chokora because he cannot speak German and we the poor electorate are now Wajinga till we redeem ourselves in 2022.Angalau sisi wajinga na wewe je Malaya would be an upgrade .

After Raila withdrew his case against waiguru on NYS theft they are thick friends. we in Mt kenya specifically Nyeri we have been discriminated by Uhuru and his father. we voted for him with every vote we could gather and the deal was Uhuru 10 Ruto 10.but that is not the issue we will vote for the person who we think will represent our interest even if it is the devil we do not know . but take it or leave it it will not be 'raila odinga' Uhuru himself even if he is against ruto he knows he is president because of ruto . waiguru should shut her beak she can vote for raila bed them all but she is not our voice. she should be ashamed and know nothing lasts for ever nothing

@visitor - stop whining over nothing! You sound very lost in your own self!

You are talking like one lazy do-nothing who is always being discriminated by your own ghosts - who else discriminated you; and by who!?

You can just look at a mirror near you to help you change your under dog mentality!

What a shame to have a Nyeri “visiting” resident complain about discrimination when you hail from one of the most productive regions of Kenya!

Settle down your mind and you will begin to see good things done in your region by others.

raila sown himself as peoples president and called his supporters to beat anyone who turned up to vote when iebc called for another presidential election after supreme court nullified the first presidential election. raila disregarded the law of the land, acted against the kenyan constitution, he incited his political fanatics and told them to boycott goods and services of companies he perceived to have financed Jubelee party campaigns, there by sabotaging kenyan economy for months. to ease the tension in the country, uhuru looked for raila, helped him secure an international job, and promised to make him the next president by hook or crook. You cant force anyone on kenyans my friend. uhuru think that people who remained peaceful during last general election are weak and foolish, mt kenya supported him to the last man but his reward for the region is matusi, but goes to other part of the country to take development there... we demand respect and our rightful share of kenyan resources, we mt. kenya people we are no fools.